The $100,000 Breeders' Cup Turf Sprint is one of three new races introduced this year. A full field of 14 older horses contested the "about" 6 1/2 trip over Santa Anita's unique downhill chute, which includes a dogleg right turn before a more conventional left turn into the stretch which crosses the main track. 3-year-old filly Fleeting Spirit, fifth in the Prix de l'Abbaye after finishing a close third in the King's Stand, was sent off as the lukewarm 9-2 choice over 5-1 Get Funky, second in the Morvich Handicap after winning the Green Fish Handicap. 6-1 Diabolical, a close second in the Diadem Stakes was the third choice on the board.

7-1 Mr. Nightlinger and 8-1 California Flag battled down the hill through the opening quarter in 20.73 and half in 41.81 while as many as 3 lengths clear of the rest of the field. California Flag led the field into the stretch and looked homefree with a 1 1/2 length advantage at the 1/8 pole. However, the fast pace set the race up for closers , as a rush of horses quickly swallowed up the pacesetters in the final furlong. At the line, 37-1 longest shot Desert Code, who had raced as far back as 12th early, gained 9 places in the final furlong to win by 1/2 a length over Diabolical, who in turn was 3/4 length in front of 16-1 Storm Treasure who closed from last. The final time was 1:11.60 over the very firm course. Favorite Fleeting Spirit finishing 4th, 3/4 length behind Storm Treasure. 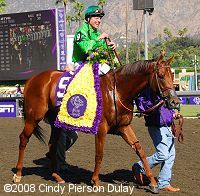 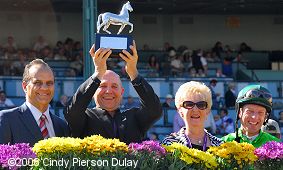 Right: Joe Torre, manager of the Los Angeles Dodgers presents the trophy to trainer David Hofmans, owner Susan Osborne of Tarabilla Farms, and jockey Richard Migliore. Hofmans said, "I thought he'd be five, six, seven lengths closer of where he was. I thought he was too far back. But I have so much confidence in Migliore riding this horse. He's won four races down the hill on him. Probably should have won five. But I felt good that Migliore was on him. I would have been concerned if anybody else had been on the horse. A bigger concern was when I saw these horses train here, and I saw his opposition in the receiving barn. There are fantastic horses in this race. We were very proud to beat these horses, I tell you." 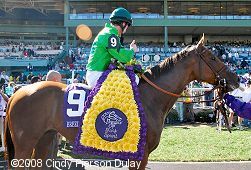 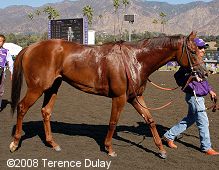 Right: Desert Code heads back to the barn after the race. Winning jockey Richard Migliore said, "It's not difficult to get a horse settled and relaxed when they go as fast as they were going. I actually hustled him away from the gate today to try to have some position and my horse wasn't comfortable with it. If I continue to hustle, I'm not going to get anything. So I just listened to my horse, put my hands down and let him find his stride. I was feeling pretty good about the 3/8, and thinking I could get a good piece of it, and not necessarily win it. Having the experience of riding over this downhill course a lot, I know when you start making your run before the dirt, you generally get in trouble crossing. So I decided to wait and be more patient. Didn't ask him for his best until we were over the dirt. I don't think I hit him until the 1/8 pole. And David had him ready." 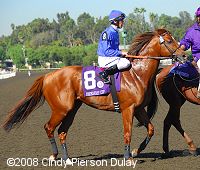 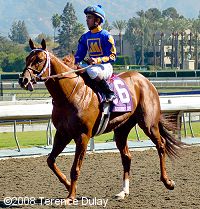 Left: Second place finisher Diabolical heads over to the turf course before the race. His jockey Frankie Dettori said, "It was a good run. That horse (Desert Code) came out of the blue and got us. I thought I'd won it. He ran super, just unlucky." His trainer Saeed bin Suroor added, "He ran a big race. I have to be happy with the way he finished. I thought for a second that we won the race. We knew it was going to be a tough race, but he was doing so well, even when he was in England, so I was very confident. I thought before the race that we would win it."

Right: Third place finisher Storm Treasure returns after the race. His jockey Shaun Bridgmohan said, "I had a great trip. I had to go around them. He's that kind of a horse. Once you get him going, it's hard to stop and go again. I thought he ran tremendous." His trainer Steve Asmussen added, "He got a great run. Shaun gave him a good trip. He put him in the best position he could be, and he made a nice run and made it a very exciting race." 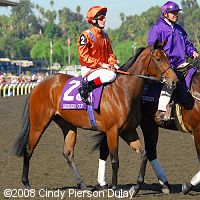 Fourth place finisher and beaten favorite Fleeting Spirit heads over to the turf course before the race. Her jockey John Murtagh said, "She ran well. I took her inside and got through the gap. The horse on the outside (Desert Code) was just too good. She's just a 3-year-old filly (Fleeting Spirit). She'll be a top-class sprinter next year."