The Breeders' Cup World Championships went to a 2-day format one year ago with three new races added, and this year they added three more races and redistributed the 14 races. The five Championship races run on Friday featured just the female races, headlined by the Ladies' Classic, formerly known as the Distaff. A crowd of 31,257 came out to Santa Anita Park in Arcadia, California for day one of the 25th renewal of the Breeders' Cup, under sunny skies and temperatures around 90. With the dry heat all week, the turf course was very firm while the main track is the synthetic Pro-Ride which is always officially fast.


The highlight race of the Friday card is the $2 million Breeders' Cup Ladies Classic (G1) for older fillies and mares going 1 1/8 miles on the Pro-Ride main track. As expected, the undefeated Zenyatta was sent off as the 1-2 favorite in the field of 8. Canadian hope and 75-1 longest shot Bear Now led for the first 7 furlongs through fractions of 48.08 and 1:11.08, and then Zenyatta, unhurried early, came out 6 wide into the lane and unleashed an impressive last to first move, taking over at the 3/16 pole and drawing away to a 1 1/2 length victory over 8-1 third choice Cocoa Beach in 1:46.85. The time was just 5/100 second off the track record..

Winning jockey Mike Smith said, "She's just amazing. As soon as we got away in good order, I knew it was good. I knew (her run) was there any time I asked her. I've never seen a horse go past other horses like this filly can. She sets herself up to come to them, and she just blazes by them. That was a field of world-class fillies. I've been on other horses that have speed and can pass other horses, but none like her." 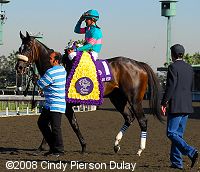 The $2 million Emirates Airlines Breeders' Cup Filly and Mare Turf (G1) featured 10 older fillies and mares go 1 1/4 miles on the turf. European invader Halfway to Heaven was the lukewarm 5-2 voice over 3-1 Wait a While and 5-1 Forever Together. 10-1 Folk Opera set a slow pace of 1:14.78 and 1:38.12, but the race still set up for the closers. Forever Together, ninth early, came out 5 wide and rallied strongly to prevail by 3/4 length over 49-1 longest shot Sealy Hill in 2:01.58. It was just a head back to Wait a While third. Halfway to Heaven stalked the pace in second early but weakened in the final furlong to finish 7th.

Winning trainer Jonathan Sheppard said, "That was her normal style of running to come from far off the pace. We pretty much decided not to change anything, even though I was a bit concerned with the firmer ground. She had never been farther than 1 1/8, and you don't know if they'll go 1 1/4 until you try. My only concern was with her style of running with the firm turf and fairly tight turns." 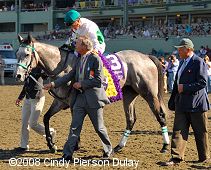 Winning trainer Christopher Paasch said, "Her late run is devastating. She tears their hearts out. In three straight Grade 1 races now, she come from 15 lengths out of it and won exactly like she did today. I would think that clinches the 2-year-old championship but I'm not going to Disneyland, I'm coming back to the Breeders' Cup next year." 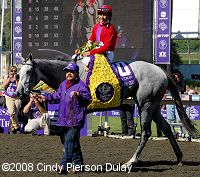 The $1 million Grey Goose Juvenile Fillies Turf is one of the new races introduced this year. A field of 12 two-year-old fillies went 1 mile on the turf. Laragh was sent off as the 5-2 favorite over 7-2 Consequence and 6-1 Saucey Evening. Laragh was allowed an uncontested lead of as many as 2 1/2 lengths through fractions of 45.82 and 1:10.10. With a furlong remaining, she looked homefree but 11-1 Maram, seventh early, and 10-1 Heart Shaped, 10th early, were closing well down the center of the course. Maram got her nose on the line in front of Heart Shaped, just a length in front of pacesetting favorite Laragh third. The running time was 1:35.15.

Winning trainer Chad Brown said, "She didn't get the respect she deserved because I ran her for a tag the first time. But it really doesn't matter; the numbers said she was good enough. The two guys I worked for (Shug McGaughey and Bobby Frankel) told me she belonged, and I think she belonged, and she did. I didn't know about the Europeans. But after working for the guys I worked for, I was around so many good horses that I knew what they looked like." 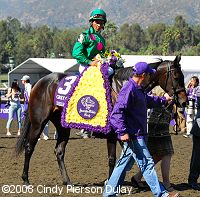 Kicking off the stakes action on Friday was the $1 million Sentient Breeders' Cup Filly and Mare Sprint, with a field of 13 older fillies and mares going 7 furlongs on the Pro-Ride. Indian Blessing was the 9-5 favorite over 3-1 Ventura and 5-1 Zaftig. Indian Blessing contested the early pace with 13-1 Dearest Trickski through fractions of 22.26, 44.02, and 1:07.91. She led to mid-stretch, but Ventura, as far back as 10th early, came out 5 wide into the lane and closed with a rush, passing Indian Blessing inside the 1/8 pole and pulling away with authority to win by 4 lengths in time of 1:19.90. It was another 2 lengths back to Zaftig third.

Winning jockey Garrett Gomez said, "She ran effortlessly. She's the kind of filly that, once she makes the lead, will kind of pull up a little. When we went by those horses, she was just cruising. She's very tactical. Around the 3/8 pole I had edged her out a little and she got into another gear. Down the stretch, I got into her a little (whip) to keep her focused on the race." 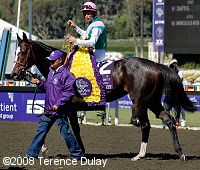