The $3 million Emirates Airline Breeders' Cup Turf (G1) is the second richest race in North America, for older horses going 1 1/2 miles on the turf. A field of 12 went to post on Saturday afternoon, with Soldier of Fortune sent off as the 8-5 favorite exiting a third place finish in the Prix de l'Arc de Triomphe after finishing second in the Grand Prix de Saint-Cloud and winning the Coronation Cup. In to challenge him included 5-1 second choice Grand Couturier, the top American hope exiting wins in both the Joe Hirsch Turf Classic and the Sword Dancer Invitational, and 6-1 third choice Conduit, winner of the St. Leger Stakes and the Gordon Stakes after finishing second in the King Edward VII. The field also included two previous winners of the race, 2006 winner Red Rocks at 8-1 and 2004 winner Better Talk Now at 36-1.

66-1 longest shot Red Rock Canyon, entered as the rabbit by trainer Aidan O'Brien for stablemate and favorite Soldier of Fortune, was sent to the front by jockey Colm O'Donoghue, and he set fractions of 24.28, 47.06, 1:10.20, and 1:33.86 over the firm course. 11-1 Out of Control stalked him in second, with Soldier of Fortune third saving ground the whole way. At the top of the stretch, jockey John Murtagh found room on the inside and sent Soldier of Fortune to the lead, getting 10 furlongs in 1:58.73. He held a short lead into mid-stretch, but the fast early pace took its toll, as he faded in the final furlong. Conduit, who had raced as far back as 8th early, came out wide into the lane and closed with a rush to win going away by 1 1/2 lengths over 9-1 Eagle Mountain in 2:23.42. It was another 2 1/4 lengths back to late-running 26-1 Dancing Forever third, by a head over favorite Soldier of Fortune in fourth. 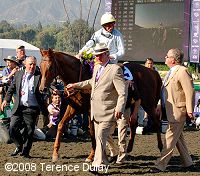 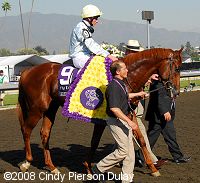 Right: Conduit heads to the winner's circle. Winning trainer Sir Michael Stoute said, "The jockey rode a masterful race and had him in the right position. When he asked him, the jockey got him into gear and I thought from a long way out that he was going to come and pick them up and he did. I was very confident running him on the course here because he's raced well on firm turf before. I was not worried about the heat today. We were sure there was going to be a good, honest pace. He's a very promising horse. He's a 3yearold. Pilsudski was 4, Kalanisi was 4, as well. He keeps getting better, that's the exciting thing about him. I never contemplated using Lasix with him. This horse has never shown any sign of bleeding. We didn't use it with Pilsudski or Kalanisi." 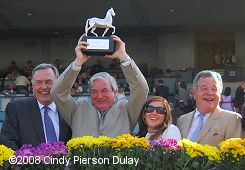 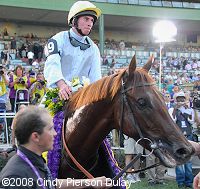 Right: Conduit in the winner's circle. Reynolds said, "When we ran in the Golden Stakes at Goodwood, we thought we had too close up to the pace. And we were drawn 9, so we didn't have great options. But we thought there should be good pace with the pacemaker. And Ryan decided he'd get him switched off and just ride a nice, smooth, confident race on him. We've had a fantastic year. We've had 15 winners now, and we thought we had the highlight when Tartan Bearer just got touched off on the Derby, and then this guy comes along. So we didn't win one Group 1 race last year. This year we've had Group 1, some 2, and some 3. And some promising 3yearolds for next year, 4yearolds for next year, including Conduit." 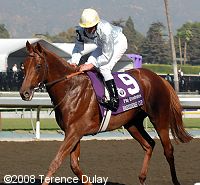 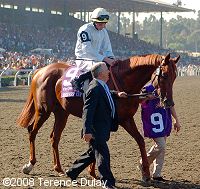 Left: Conduit heads over to the turf course in front of the crowded grandstand before the race.

Right: Conduit returns after the race. Winning jockey Ryan Moore said, "We were in a gallop early. I was a little further back than I wanted to be. Once he hits his stride, he gets in a real good rhythm and just keeps going. As soon as he chimed in, I knew I had them. It's great to ride a true Group 1 winner. I didn't know if he could close enough ground coming down the stretch, but he has a great stride, and he showed it. I thought maybe earlier the leaders would be coming back to me." 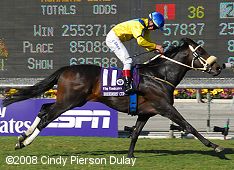 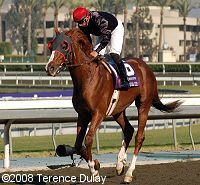 Left: Second place finisher Eagle Mountain runs out after the finish. His jockey Kevin Shea said, "Second time back, (and starting in the) Breeders' Cup, what more can you ask for? A mile and a half was just a little hard of a ride for him. If he had had another race in between, maybe he could have pulled it off. We were in perfect position, sitting right behind the leaders, when we turned for home. I said, 'They will have to come and catch me.' Unfortunately, someone did catch me." His trainer Michael de Kock added, "I thought it was a great race; a great effort. It was only his second run in a year and the first time for the jockey on this race track. It was a super run."

Right: Third place finisher Dancing Forever returns after the race. His jockey Rene Douglas said, "This was such a tough race. We finished third to two of the best turf horses in the world. I had a great trip and the horse gave me 100 percent. I was just behind the first pack . (Spring House) was outside of me the whole way. The horse on the rail (Red Rock Canyon) was backing up quick so we had to move. He took me where I needed to go to the stretch, and I rode real hard from there." His trainer Shug McGaughey added, "He ran well. If we had been able to get a decent race into him this summer he may have won. It looked to me that we had to go a little wide. He made his move and then he flattened out."

Fourth place finisher and beaten favorite Soldier of Fortune heads over to the turf course before the race. His trainer Aidan O'Brien said, "I thought he ran a great race. It came three weeks after the Arc. We often thought that with this horse that he needs a little bit of space between his races. But we had to come here after the Arc. He ran well." His jockey John Murtagh added, "No excuse."