Saratoga Race Course hosted two prestigious Grade 1 events on Saturday, with a crowd of 32,344 enjoying ideal racing weather, clear skies and temperatures in the low 70's. The feature race on the card was the $600,000 Alabama Stakes (G1), a 1 1/4 mile main track event for 3-year-old fillies. Just five went postward, after Skylighter scratched out the morning of the race. As expected, the two-horse Godolphin entry of Music Note and Little Belle was sent off as the 2-5 choice. Both fillies last raced in the Coaching Club American Oaks, where Music Note finished 11 lengths ahead of her stablemate. In to challenge the Saeed bin Suroor duo was 2-1 second choice Proud Spell, winner of the Fair Grounds Oaks, Kentucky Oaks, and Delaware Oaks so far this year. Black-Eyed Susan winner Sweet Vendetta at 10-1 and Demoiselle winner Mushka at 12-1 completed the field.

As expected, jockey Rajiv Maragh sent Little Belle to the front to set the pace. Proud Spell stalked her from the outside about a length behind through fractions of 24.97, 50.22, and 1:14.70. Turning for home, jockey Gabriel Saez asked Proud Spell to challenge for the lead and she responded, taking over the lead at the 1/4 pole through a mile in 1:38.99. Music Note, who had raced in third most of the way, put in her bid in mid stretch and challenging Proud Spell for the lead. However, Proud Spell held her off in the final strides to prevail by a head in 2:04.08 over the fast main track. It was another 4 1/2 lengths back to pacesetter Little Belle third, and 22 more lengths to the rest of the field. 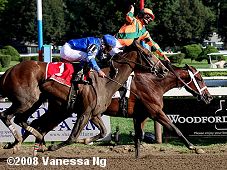 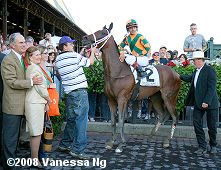 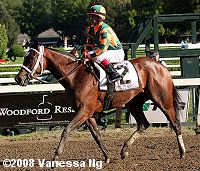 Left: Proud Spell in the winner's circle with trainer Larry Jones on the right. Jones said, "This filly of ours has never been passed down the stretch, the entire time we've had her, she's never been passed. I told Gabriel, 'Do not let Music Note in front. I don't care if you have to ride her all the way to the barn area, down Nelson Avenue, or what, she don't get in front.' Because if you come up to her and eyeball her, you won't beat her. As soon as Music Note got to her, the race was on, and she dug in and found a way to out-gut her. At the top of the stretch, I knew it was going to be the horse race that we were all looking for." 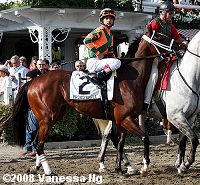 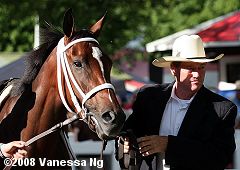 Left: Proud Spell heads out for the post parade. Her jockey Gabriel Saez said, "I needed to be patient and stay in position. That's what we did until we could make the best move. When I got to the 1/8 pole, I had to push a little harder. When I saw Music Note come along side of us, I told my filly, `Come on, let's start running.' It was an exciting finish."

Right: Proud Spell and trainer Larry Jones enter the paddock before the race. Jones said, "This filly has been around all year. She was the first horse to beat Indian Blessing, which was the champion. She showed up for the Kentucky Oaks, she's still around for the Alabama, she won the Delaware Oaks. In my mind, there's no doubt she's the best three-year-old filly in the country and hopefully we showed it here today." 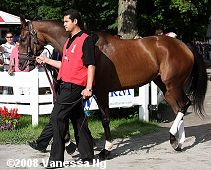 Second place finisher, and part of the beaten favorite entry, Music Note enters the paddock before the race. Her trainer Saeed bin Suroor said, "It was a great race. Our filly ran a big race; we're happy with the way she finished the race. It was so close; it was a tough race. She was behind all the way in a nice position. I talked to the jockey (Javier Castellano) and he was really happy with the racetrack and she was traveling very well. He said that the last two furlongs, when he started to ask her, that's when she gave everything. Proud Spell is a top-class filly, one of the best in the U.S. But, our filly, Music Note, is a dual Grade 1 winner this year. We'll see how she come back after the race. Maybe we'll take her to Belmont." Her jockey Javier Castellano said, "We were in good position throughout the whole race. Two of the best fillies hooked up in the stretch. It was getting close to the finish and both horses were fighting. My filly was fighting right up to the end, unfortunately, she got beat." 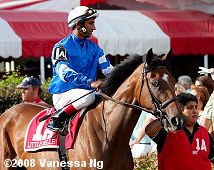 Third place finisher, and the other half of the beaten favorite entry, Little Belle heads out for the post parade. Her jockey Rajiv Maragh said, "The gates opened and everybody was taking back. So I went to the lead and I thought they would have a hard time catching me. My filly kept on going, but the other two horses (Proud Spell and Music Note) went right by me."

The co-feature on Saturday was the $500,000 Sword Dancer Invitational Stakes (G1) for older horses going 1 1/2 miles on the inner turf course. Just six went postward after Red Rocks and Champs Elysees scratched out, with Dancing Forever sent off as the 3-2 choice, coming into the race off two straight wins in the Elkhorn at Keeneland and then the Manhattan Handicap at Belmont Park. In to challenge the Phipps homebred included 3-1 second choice Better Talk Now, third in the Man O'War last time out but winless since last year's Manhattan Handicap, and 7-2 third choice Grand Couturier, winner of the Sword Dancer last year but sixth in the Man O'War last time out.

11-2 fourth choice Presious Passion was allowed an uncontested lead of as many as 3 lengths, setting easy fractions of 25.80, 50.44, 1:16.13, and 1:41.73 over the firm turf course. 6-1 fifth choice Equitable sat second and favorite Dancing Forever settled in third for all three turns. Presious Passion continued to lead into the stretch for the final time, getting 1 1/4 miles in a slow 2:06.78 but tired through the lane. Grand Couturier, who raced in fourth early, found room on the hedge at the top of the stretch and closed with a rush on the inside, cruising under the line 2 lengths in front of late-running Better Talk Now, who had raced in last throughout and closed well down the center of the course. The running time was 2:32.21. It was just 3/4 length more to another closer, 35-1 longest shot Interpatation third. Favorite Dancing Forever came wide into the stretch but faded late, finishing a disappointing fifth. Grand Couturier joins Majesty's Prince (1983-'84), El Senor (1989-'90), and With Anticipation (2001-'02) as the only horses to win back-to-back runnings of the Sword Dancer. 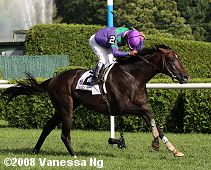 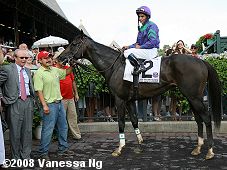 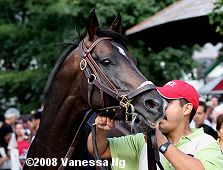 Left: Grand Couturier in the winner's circle. Winning trainer Robert Ribaudo said, "Two years ago, we didn't know him. It was a question of getting to know him, and he just wants to come from out of it. The European horses can come from out of it without a pace, as you can see here. We knew there wasn't going to be much pace. Covering up is the best solution for horses; it makes them relax. The ride is important. If you give the right instructions and get the right rider, well, this was perfect. There was no question (he got in trouble in the lane), but Alan had a lot of horse and that's what it takes. Alan is a great rider. We're not sure about the Breeders' Cup. California is a little different than Monmouth. We'll take it one race at a time. We have to get something in between. We haven't looked that far ahead. We are certainly eligible and ready."

Right: Grand Couturier takes a look around as he enters the paddock before the race. 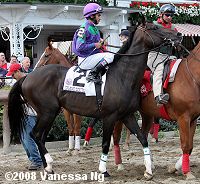 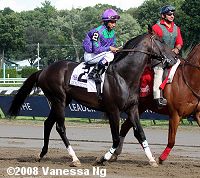 Left: Grand Couturier looks a bit frisky as he heads out for the post parade. Winning jockey Alan Garcia said, "I thought I was home-free because I thought I had a lot of horse. And then, the rail opened and I passed two horses. When I was right there, (Presious Passion) shut me off so fast and I had nowhere to go. I was thinking, 'Oh my God, my horse lost all of his momentum,' but after that, he kept trying, so I said, 'Let me keep riding.' Bobby (Ribaudo) did an excellent job with this horse, getting him to this race." 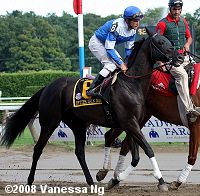 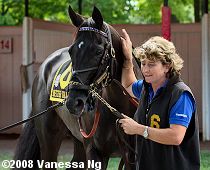 Left: Second place finisher Better Talk Now in the post parade. His trainer H. Graham Motion said, "It was just a little unlucky that we had to come so wide. Ramon made the decision to go wide, and suddenly, it became very wide. The winner got the trip up the rail, but he was also steadied. I feel like we had a little bit of an excuse, but I can't take anything away from the winner."

Right: Better Talk Now in the paddock before the race. His jockey Ramon Dominguez said, "It was good a race, but we had to go around horses." 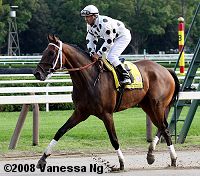 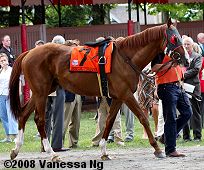 Left: Third place finisher Interpatation returns after the race. His trainer Bobby Barbara said, "I think it was a really great race. At one point, I thought he was going to win it. We put him in today looking ahead for a race at Philadelphia Park ($250,000 PTHA President's Cup, September 13). We really wanted to get this race under our belt. He ran very well."

Right: Fifth place finisher and beaten favorite Dancing Forever in the paddock before the race. The 3-2 favorite settled in third out 2 wide the whole way under regular rider Rene Douglas, came out four wide into the lane for the drive but flattened out late finishing fifth. The loss breaks a streak of six in-the-money finishes that began last October. The Shug McGaughey trainee has a record of 5 wins, 6 seconds, and 2 thirds in 20 starts, earning $602,870 for owner-breeder Phipps Stable.