The $5 million Dubai Duty Free (G1) is the first of two turf races on World Cup night. A full field of 16 older horses went to post in this 1777 meter (about 1 1/8 mile) event, with Archipenko sent off as the 7-2 favorite, exiting a win in the Zabeel Mile after finishing second in last year's Arlington Million. In to challenge the Mike de Kock trained son of Kingmambo included 9-2 second choice Paco Boy, unraced since winning the Prix de la Foret in October, and 6-1 third choice Vodka, the Japanese mare exiting a close fifth in the Jebel Hatta after finishing third in the Japan Cup.

Jockey Ahmed Ajtebi sent 12-1 Gladiatorus to the front soon after the start, setting a pace of 23.73, 46.70, and 1:10.25 while being stalked by Vodka and 16-1 Jay Peg for the first 6 furlongs. Turning for home, Jay Peg tired and Vodka put in a bid for the lead 2 1/2 furlongs out, but Gladiatorus was up to the task, kicking clear in mid stretch getting the mile in 1:33.82. 10-1 Presvis, who sat at the back of the field early while saving ground around both turns, came out for the drive and closed well late but was left with too much ground to make up, as Gladiatorus took the Duty Free in gate-to-wire style by 3 1/4 lengths in a time of 1:46.92 over the good turf course. It was another 2 lengths back to 40-1 Alexandros third. Favorite Archipenko raced in midpack the whole way but failed to rally late, finishing a disappointing sixth beaten 9 lengths. 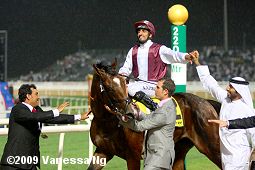 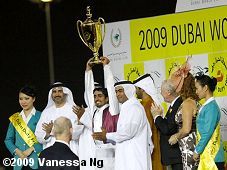 Left: His connections celebrate when Gladiatorus returns after the race.

Right: Jockey Ahmed Ajtebi continues to celebrate at the trophy presentation. Ajtebi said, "I am so happy and so proud. We were always going to attack from the front because that's how he won last time. This is a dream come true. But it has nothing to do with me. Gladiatorus is a special horse and he is the best horse in the world. He's a super horse and I think I caught the other jockeys by surprise." 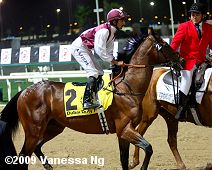 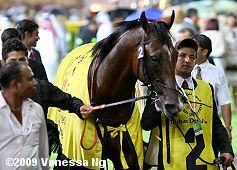 Left: Gladiatorus goes out on the track for the post parade.

Right: Gladiatorus heads back to the barn with his new winner's blanket. Winning trainer Mubarek bin Shafya said, "I was very confident before the start - he's a special horse. Ahmed is young, but he's learning and was very gutsy in the race." 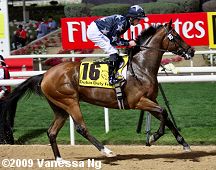 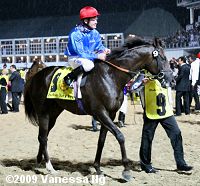 Left: Second place finisher Presvis warms up before the race. His jockey Ryan Moore said, "He flew home, but the winner slipped the field and I could never get near him in time." Trainer Luca Cumani added, "We can now go to Hong Kong or Singapore - or perhaps both. We'll have to see how the horse comes out of the race. We are delighted we've had three winners in Dubai and have had a great time. Winning this would have been great, but second is the next best thing."

Right: Third place finisher Alexandros returns after the race. His jockey Michael Kinane said, "He ran a good race, he just got tightened up at the start but he ran on well and has improved throughout the carnival." 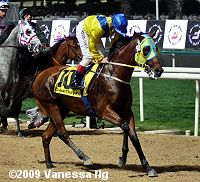 Sixth place finisher and beaten favorite Archipenko warms up before the race. His jockey Kevin Shea said, "It wasn't Archie's day today. He didn't pick up. He just ran a bit flat."