The second best race on Dubai World Cup day is the $5 million Dubai Sheema Classic (G1) and the 2009 edition is the last turf race to be run at Nad al Sheba. A field of 15 older horses went to post in this 2400 meter (about 1 1/2 mile) event around all 3 bends of the course, with Youmzain sent off as the 7-2 choice despite being unraced since finishing second in the Prix de l'Arc de Triomphe. In to challenge him included 6-1 second choice Doctor Dino, winner of the Hong Kong Vase last out, and 15-2 third choice Purple Moon, fourth in the Dubai City of Gold Stakes after finishing second to Doctor Dino in Hong Kong.

Jockey Kevin Shea sent 8-1 shot Front House to the lead first time past the stands and he set a very slow pace of 26.71, 53.14, 1:19.30, and 1:44.99 over the "good" turf course while being stalked by Purple Moon with 14-1 Spanish Moon close behind those two. Entering the stretch, Doctor Dino put in a bid for the lead, getting 1 1/4 miles in 2:08.44, but soon faded. Front House tired and faded from contention as well, allowing Spanish Moon to inherit the lead. Purple Moon moved up to challenge and the pair battled for the final 3/16 mile. However, 14-1 Eastern Anthem, who was near the back of the field for the first mile, came out wide for the drive and closed well down the center of the course. Eastern Anthem hit the wire just a nose in front of Spanish Moon, completing the trip in 2:31.84. Only a head separated Spanish Moon and third place finisher Purple Moon to complete the 3-horse blanket finish. It was another 2 1/4 lengths back to late-running favorite Youmzain fourth.

Results Chart for the Race from Emirates Racing Authority. Results for US wagering: 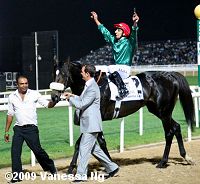 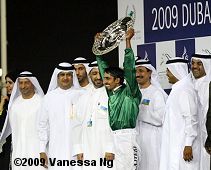 Right: Ajtebi continues the celebration with the Sheema Classic trophy. Ajtebi said, "I was a camel rider between (ages) 6 and 14 and I think that helped because, as like Thoroughbred racing, it is all about speed. I've spent all my life in the game - it's not all the same game but it is four legs and speed. I had to get him switched off at the back and when I pulled out he really went for me. I thought at the furlong pole that I might get there but with Ryan Moore and Jamie Spencer upsides me, we had to fight right to the finish." 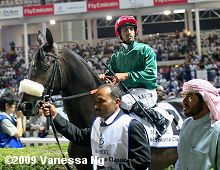 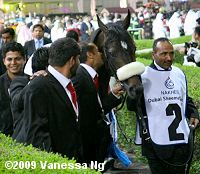 Left: Eastern Anthem heads out for the post parade.

Right: Eastern Anthem gets a kiss from one of his handlers as he heads back to the barn with his winner's blanket. 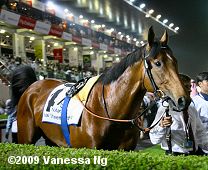 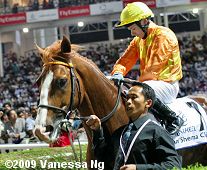 Left: Second place finisher Spanish Moon in the paddock before the race. His jockey Ryan Moore said, "I hate seconds (he was also second on Presvis) and this is hard to take. He battled his heart out all the way to the line, but we just got mugged on the post." Trainer Sir Michael Stoute added, "He ran a great race but we got nudged out of it. We're delighted and have no excuses."

Right: Third place finisher Purple Moon heads out for the post parade. His jockey Jamie Spencer said, "There was no pace, this is a two-mile horse that finished second in the Melbourne Cup, so the race was just not run to suit us. However, everyone is delighted he pulled out a terrific effort." Trainer Luca Cumani added, "The pace didn't suit us as he needs a fast pace. In his last three runs in Japan, Hong Kong and here there has been no pace - that is what he needs. He's going to have a holiday now and start all over again. He'll have a couple of prep races and then Japan, Hong Kong and here - but he won't go back to Melbourne." 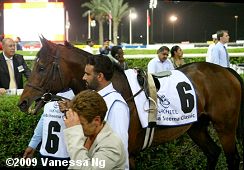 Fourth place finisher and beaten favorite Youmzain in the paddock before the race. His jockey Richard Hills said, "The pace was too slow and I went for a run in the straight, got stopped, and though he finished well, it was too late. Three times he's been here, and they've crawled each time. The horse is in great shape and he will win a big one back home soon." Trainer Mick Channon added, "He did nothing wrong and he was unlucky. He should have won, but that's racing. It's not disappointing, it's just the way it goes. He had a good draw but he got nudged out of the stalls and, going round the first bend, he was a long way back. But still if he got a run up the straight he would have won, but it didn't happen."