Kicking off the Cathay Pacific Hong Kong International Races on Sunday was the HK$14 million ($1.81 million U.S.) Hong Kong Vase (G1). A field of 13 older horses faced the starter in this 2400 meter (about 1 1/2 mile) trip around two turns of the main turf course at Sha Tin Racecourse. As expected, defending champion Doctor Dino was sent off as the 6-5 favorite, despite coming off a poor fifth place finish in the Canadian International at Woodbine last out. In to challenge him included 3-1 second choice Jaguar Mail, second in the Copa Argentina at Tokyo last out, and 7-1 third choice Purple Moon, ninth in the Japan Cup last out and winless since last August.

18-1 outsider Packing Winner went right to the front under jockey Douglas Whyte and was allowed an uncontested lead of as many as 1 3/4 lengths while setting easy early fractions of 27.27, 52.58, 1:18.16, and 1:42.78 over the good turf course. 14-1 Douro Valley, Purple Moon, and 38-1 Mourilyan stalked the pace for the first mile. Packing Winner led the field into the stretch, but he flattened out in the final furlong to eventually finish fifth. Purple Moon gained a short lead, but Doctor Dino, who was last early, closed with a rush to nail him at the line by a head, in a time of 2:29.14. It was just a neck back to late-running Jaguar Mail third. 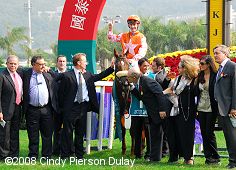 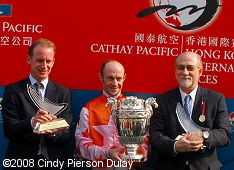 Left: Doctor Dino in the winner's circle getting a kiss from his owner. This was likely his last start before retiring to stud.

Right: Trainer Richard Gibson, jockey Olivier Peslier, and owner Javier Martinez Salmean pose with the Hong Kong Vase trophy. Gibson said, "Before anything I want to commiserate with Luca Cumani and Purple Moon for the great race they ran. But the story is about Doctor Dino and he has joined an elite band of horses to win this race twice. He's a very unique, powerful athlete and I am very proud of him." 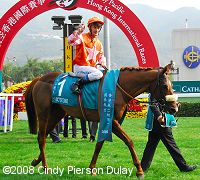 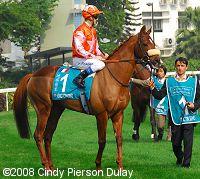 Right: Doctor Dino comes out on the track for the post parade. Winning jockey Olivier Peslier said, "He moved well down the back straight and being on the outside helped him. He takes a little time to wind up but the horse who came at me on the outside (Jaguar Mail) also helped me. I want to thank the owner and trainer and in particular Eric Gandon who rides him every day." 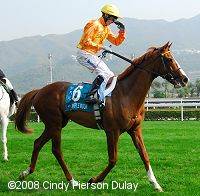 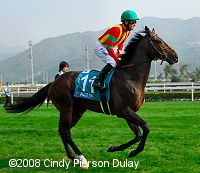 Left: Second place finisher Purple Moon returns after the race. His trainer Luca Cumani said, "I am very proud with the way the horse ran. I don't mind when they get beaten when they run to their very best." His jockey Jamie Spencer added, "He has done nothing wrong. It was a big step up on his effort in Japan. He was the winner everywhere bar the line."

Right: Third place finisher Jaguar Mail takes off in the post parade. His jockey Mick Kinane said, "He has run a humdinger but he could have done with more pace but there is nothing I could do about that." 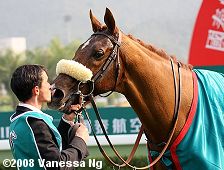 Doctor Dino gets a kiss from his handler Eric Gandon before heading back to the barn. Eric also rides him in the mornings.