The Cathay Pacific Hong Kong Mile (G1) featured a full field of 14 older horses going 1600 meters (about 1 mile) around one turn of the turf course at Sha Tin for a purse of HK$16 million ($2.06 million U.S.). Armada was sent off as the 11-10 choice, despite finishing fifth in the Sprint Trial last out, but he was second in both the Champions Mile (G1) and the Yasuda Kinen (G1) before that defeat. In to challenge him included 7-2 second choice Good Ba Ba, the defending champion in this event but winless since the Champions Mile back in April, and 8-1 third choice Egyptian Ra, winner of the Mile Trial, the major local prep for this race, by almost 4 lengths. Top American hope Kip Deville, second in the Breeders' Cup Mile last out, was dismissed by local bettors as the 10-1 fifth choice.

Egyptian Ra was sent to the front by jockey Felix Coetzee, and set the early fractions of 24.34, 46.56, and 1:09.59 while being stalked by 14-1 Natagora and 88-1 Joy And Fun down the backstretch. Egyptian Ra continued to lead to mid-stretch, but Good Ba Ba, ninth early, found another gear and powered past the field late to win going away by 2 1/2 lengths over late-running 17-1 Able One, completing the distance in a new course record time of 1:32.71. It was another 3/4 lengths back to pacesetter Egyptian Ra third. Favored Armada raced in midpack seventh and could not significantly improve his position, finishing sixth beaten 3 3/4 lengths, while Kip Deville was well placed in fourth down the backstretch, but did not handle the right-handed turn well, swinging to the outside at the 3/8 pole and steadily bearing out through the stretch to finish ninth beaten 6 1/2 lengths. 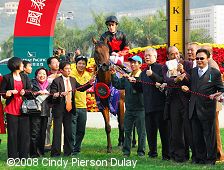 Right: The trophy presentation for the Hong Kong Mile. Winning trainer Andreas Schutz said, "To win is beyond expectation. I am delighted for the horse, jockey and trainer. The horse has been produced to a high standard to break the track record, he is a great horse. I always thought he was a champion, from the first day I had him I said he could win Group races and last year we were proven right. I was always confident today, he looked great but I was not sure if he could win with a Breeders' Cup runner-up (Kip Deville) in the field." 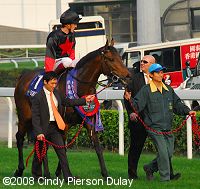 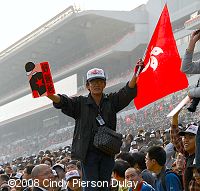 Left: Good Ba Ba parades with his winner's sash. Winning jockey Christophe Soumillon said, "I'm very happy to have won the race, but I'm feeling sorry for Olivier (Doleuze, regular rider who he replaced at the request of the owner), but these things happen in racing. I have ridden some horses with a good turn of foot, and maybe he's not Zarkava, but winning this race today for the second time makes him the best miler in the world."

Right: Good Ba Ba had his own cheering section in the stands. 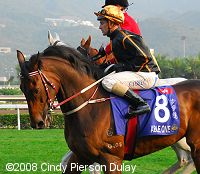 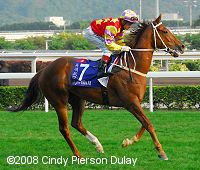 Left: Second place finisher Able One in the post parade. His jockey Darren Beadman said, "The winner was just too good, and maybe my horse was just one run short, but we hadn't been able to squeeze another race into him. Still he has run very well."

Right: Third place finisher Egyptian Ra returns after the race. His jockey Felix Coetzee said, "He's run his usual honest race but the winner was back to his very best." 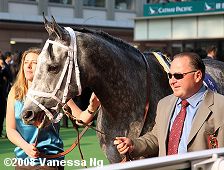 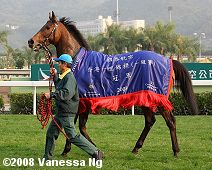 Left: Top US hope Kip Deville in the paddock before the race with his trainer Richard Dutrow. He was in contention early, but went wide around the final turn and faded to finish 9th.

Right: Mile winner Good Ba Ba heads back to the barn with his winner's blanket.