The main event of the Cathay Pacific Hong Kong International Races is the HK$20 million ($2.58 million U.S.) Hong Kong Cup (G1), a 2000-meter (about 1 1/4 mile) trip around two turns of the main turf course at Sha Tin. Last year's runner-up and main local hope Viva Pataca was sent off as the 3-10 odds-on choice in the field of 14, coming into this race off a 2-race win streak consisting of the Mission Hills Trophy (G3) and the Cup Trial (G2), the main local prep for the Cup. Eagle Mountain, from the globe-trotting barn of South African trainer Mike de Kock, was the 5-1 second choice, exiting his runner-up finish to Conduit in the Breeders' Cup Turf at Santa Anita. Lush Lashes, the 3-year-old filly making her first start against males, was the 13-1 third choice for trainer Jim Bolger coming off a close second in the Prix de l'Opera (G1) at Longchamp after winning both the Yorkshire Oaks (G1) and Matron Stakes (G1).

150-1 longest shot Estejo battled for the lead with 68-1 Viva Macau and 13-1 Out of Control around the clubhouse turn and down the backstretch through fractions of 26.56, 50.28, and 1:13.81 over the good course, while jockey Darren Beadman kept favorite Viva Pataca on a ground-saving path on the rail, unhurried early back in 11th. Out of Control poked his neck in front at the 1/4 pole, getting the mile in 1:37.72, but his lead was short-lived. Eagle Mountain, 8th early, found running room on the inside at the 3/16 pole and broke free from the tightly bunched pack. 18-1 Balius desperately gave chase late but was left with too much to do, as Eagle Mountain cruised under the line 1 1/4 lengths clear in a time of 2:00.92. It was another 2 lengths back to late-running 51-1 Linngari third. Viva Pataca was held up in traffic in the stretch and could never get clear, having to settle for fourth, 4 lengths back of the winner. 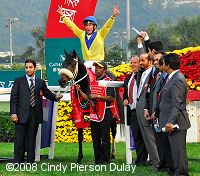 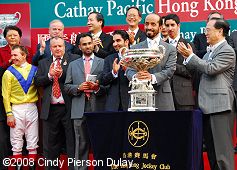 Right: Winning owner Sheikh Mohammed Bin Khalifa Al Maktoum holds the Hong Kong Cup at the trophy presentation with jockey Kevin Shea and trainer Mike de Kock on the left. de Kock said, "He was very well ridden by Kevin. The other horses were messing around at the start and he missed the break by half a length and he had to improvise. I think he won it on the turn when he got out of trouble and was able to sweep around the horses that were coming back to him. You could see around the turn he was travelling extremely well just like he did in the Breeders' Cup. He will have a break now before Dubai and he will run on Super Thursday to decide if we run him over 9f (Duty Free) or 1 1/2 miles (Sheema Classic) on World Cup night. I've thought for a while he might be as good as Archipenko and Sun Classique, and after today he may even be better." 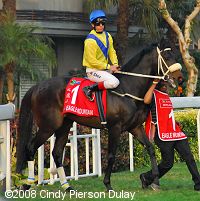 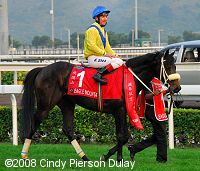 Left: Eagle Mountain heads out on the track before the race.

Right: Eagle Mountain parades with his winner's sash after the race. Winning jockey Kevin Shea said, "I had a clear run straightening and I waited until I was well inside the 400 to set him alight and when I was inside the 300 I glanced at the big screen and I saw he had gone clear and I knew it was race over. This is a special horse and has improved from America. Maybe the injury has done him a world of good and given him time to rest. Mike's results speak for themselves. He has won races in about every country in the world at Group One level." 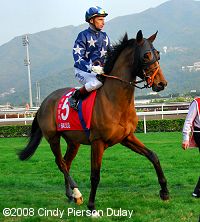 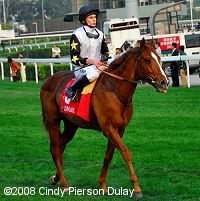 Left: Second place finisher Balius was a bit fractious in the post parade. His jockey Gerald Mosse said, "You are never satisfied when you finish second, but he's run a good race. I followed the winner through but couldn't close him down. It's the first time I've ridden him, and he's worth getting to know as he has so much heart."

Right: Third place finisher Linngari returns after the race. His jockey Ryan Moore said, "I am delighted with him he ran a great race." Owner Rupert Plersch added, "What a shame he had that draw (post 12), he definitely would have finished second with a better draw. He showed great acceleration and has shown what he can do." 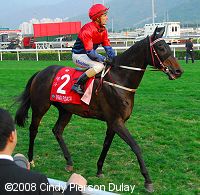 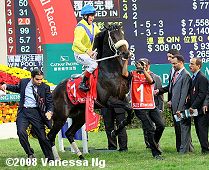 Left: Fourth place finisher and beaten favorite Viva Pataca, who was second last year, returns after the race. His jockey Darren Beadman said, "I was hammered at the 1000m mark. We were knocked around from pillar to post."

Right: Eagle Mountain was not impressed with the way they do the winner's circle in Hong Kong and threw a small fit after standing there for only a short time. 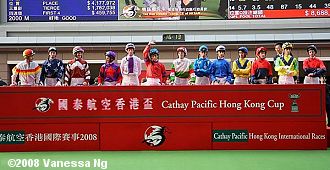