At Happy Valley Racecourse in Hong Kong, defending champion Douglas Whyte became the first three-time winner of the Cathay Pacific International Jockeys' Championship on Wednesday night, adding to his wins in 2002 and 2007. He failed to win any of the three races in the contest, however he was aboard the runner-up in all three races which gained him enough points for the victory. Each race awarded 12 points for a win, 6 for second, and 4 for third. In a change from last year, points are no longer awarded for fourth or fifth. Jockeys were assigned their mounts randomly with the races run as handicaps.

In the first leg, American representative Cornelio Velasquez came from well off the pace on the outside aboard 14-1 shot Super Genki to defeat Whyte aboard Boba Win by 1 1/4 lengths. Fellow American rider Garrett Gomez was aboard pacesetter Classa Supreme who held on for third. In the second leg, German representative Andrasch Starke came from mid-pack aboard 11-1 Ever King to defeat Royal Portrait with Douglas Whyte and Mega Bullet with French rider Christophe Lemaire. In the third and final leg of the competition, three horses hit the line together, with Christophe Lemaire's mount Kenobe nailing Douglas Whyte's mount Rewarding Star by a head. Mainland Shuttle and UK representative Jamie Spencer finished a nose back in third.

In the end, Douglas White finished on top with 18 points for the win, followed by Christophe Lemaire's 16 points. Cornelio Velasquez and Andrasch Starke tied for third place with 12 points each, while Garrett Gomez and Jamie Spencer tied for fifth with 4 points each. The rest of the riders, including such names as Christophe Soumillon, Pat Smullen, and Damien Oliver, were shut out of the points.

Born in Durban, South Africa, the 37-year-old Whyte has been champion jockey in Hong Kong for a record 8 consecutive seasons and is likely to extend that streak to 9 this term. Last season he broke Tony Cruz's record of 946 career wins and became the first rider to partner 1,000 wins in Hong Kong. His monstrous tally of 114 in 2005-06 broke his own record. His Group 1 wins include the Hong Kong Gold Cup and Hong Kong Vase (aboard Indigenous); QEII Cup (London News), Chairman's Prize (Oriental Express); Citi HK Champions & Chater Cup (Packing Winner), the Centenary Cup (Best Of The Best) and Stewards Cup (Armada).

Whyte said, "I'm a happy guy. Sorry to not have had any wins but it is points that count in these competitions, though I think I was unlucky in the final race. I was in a perfect position on the home turn when the horse on my inside (Mainland Shuttle, ridden by Jamie Spencer) came out and checked my horse. I know Kenobe has come from behind to beat us, but without that interference, Rewarding Star would have been off and gone and I doubt Kenobe would have caught us. I had some great rides and good allies. It would be marvelous to make it three in a row next year. When we are out there against these very good jockeys from all around the world, we are representing Hong Kong, and to be abl e to do that is a real privilege."

French native Christophe Lemaire, age 29, took out his license in 1999 and is now ranked among the very best riders active in Europe. Among some 800 career wins, he has won over 20 G1 races including the Cathay Pacific Hong Kong Cup in 2006 aboard Pride and five wins on the brilliant filly, Divine Proportions. Lemaire often winters in Japan where he has had a good deal of success, most notably on Heart’s Cry, winner of the Arima Kinen (defeating the great Deep Impact) and the Dubai Sheema Classic.

Lemaire said, "For a moment I was in trouble in the final race but he came home great. We have had great fun tonight. This is a great series and it was a real thrill for me to be a part of it. I was delighted to win the race on Kenobe and I'm very grateful to the trainer (Andreas Schutz) for having the horse in such wonderful order."

Hong Kong Jockey Club CEO Winfried Engelbrecht-Bresges said, "It has been a wonderful night, with great competition out on the track and the jockeys have treated our customers to some top-class racing. The atmosphere all around the track was very good, there was a real buzz of excitement, so I think we can safely call the night a big success." 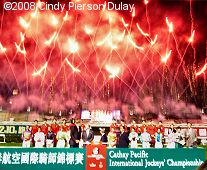 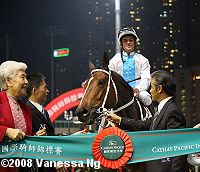 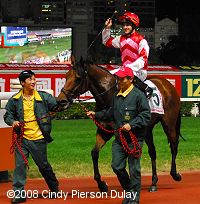 Left: Cornelio Velasquez in the winner's circle after the first leg aboard Super Genki.

Right: Christophe Lemaire salutes with his whip as he returns to the winner's circle after the final leg aboard Kenobe. 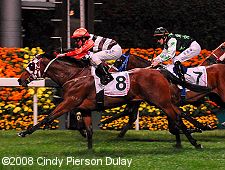 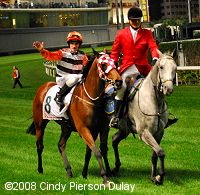 Left: Andrasch Starke wins the second leg aboard Ever King.

Right: Starke waves to the fans as he parades Ever King down the stretch after the race. 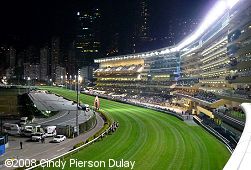 The crowded grandstand at Happy Valley with the skyscrapers of Hong Kong overlooking it.