A field of 13 older horses went to post in the HK$12 million ($1.55 million U.S.) Cathay Pacific Hong Kong Sprint (G1). Australian hope Apache Cat was sent off as the heavy 9-10 choice in this 1200-meter (about 6 furlong) dash on the turf, exiting a close second in the Winterbottom Stakes (G2) at Ascot. In to challenge the son of Lion Cavern included 4-1 second choice Sunny Power, winner of the Sha Tin Vase in May, and 5-1 third choice Enthused, who defeated Sunny Power in the Sprint Trial last out.

Mythical Flight battled for the lead with Enthused and 133-1 longest shot Moorhouse Lad down the backstretch through an opening quarter of 23.52 and a half in 45.85. Favorite Apache Cat saved ground on the rail in 6th early. Through the stretch, pacesetter Mythical Flight and stalker Moorhouse Lad both tired and dropped from contention. Enthused, who also contested the pace, inherited a short lead but the race set up for the closers. 66-1 Inspiration found room between horses and poked his head in front in the final 1/16 of a mile. 7-1 Green Birdie gave chase followed by Apache Cat who had traffic trouble but finally got out, and the pair tried desperately to catch Enthused in the final strides but it was too late, as Inspiration held off Green Birdie by a neck, who in turn held off Apache Cat. The running time was 1:08.68. 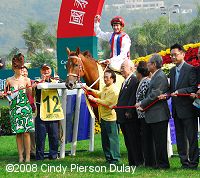 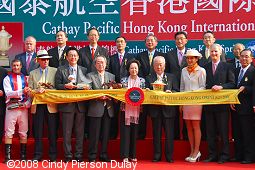 Left: Inspiration in the winner's circle.

Right: The trophy presentation for the Cathay Pacific Hong Kong Sprint. Winning trainer John Moore said, "I only put him in for the run at the last minute. We weren't expecting an invite for him and I thought he was making up the numbers. I'm still pinching myself that we won it. But I guess it shows what can happen when you have a fit horse and a great jockey. Darren gave him the ride of the century." 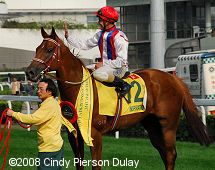 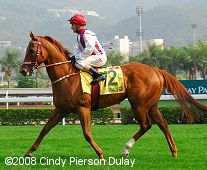 Left: Inspiration parades for the fans with his winner's sash.

Right: Inspiration in the post parade. Winning jockey Darren Beadman said, "He jumped into the bridle and I was in the right spot, tracking the favorite, when I pulled him out he sprinted really well." 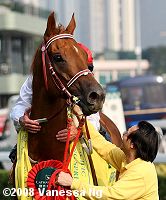 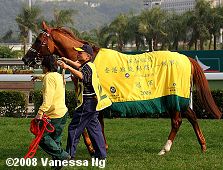 Left: Inspiration gets a hug from his jockey on the way to the winner's circle.

Right: Inspiration heads back to the barn with his winner's blanket. 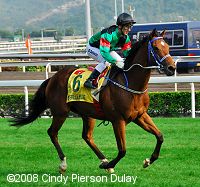 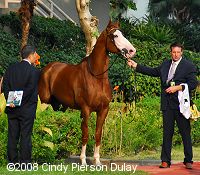 Left: Second place finisher Green Birdie returns after the race. His jockey Olivier Doleuze said, "He ran well, but he's a difficult horse to ride. He needs a horse to race with, and I was behind the winner, and the winner didn't crack. I'm looking forward to being on him again when he goes up to a mile in the Stewards' Cup next month."

Right: Third place finisher and beaten favorite Apache Cat with his trainer Greg Eurell at the test barn later in the afternoon. His jockey Corey Brown said, "No excuses, he hit a flat spot as he always does in his races, but then he ran on again, but just didn't have enough petrol in the tank today."