The $2 million Dubai Golden Shaheen (G1) is the shortest race on the World Cup card. A field of 12 older horses went to post in this 1200 meter (about 6 furlong) sprint down the dirt straightaway at Nad al Sheba Racecourse. As expected, Indian Blessing, the lone filly in the field, was sent off as the 11-8 favorite in her first start against males, exiting a win in the La Brea Stakes at Santa Anita after finishing second in the Breeders' Cup Filly and Mare Sprint. In to challenge the daughter of Indian Charlie included two horses each at 11-2 on the toteboard, locally trained Big City Man, second in the Mahab Al Shimaal, the major local prep for this race after winning the Al Shindagha Sprint, and Europe's champion sprinter Marchand D'Or, sixth in the Hong Kong Sprint last out after winning the Prix de l'Abbaye in October.

14-1 Lucky Quality was quickest away to set the pace on the grandstand side through an opening quarter of 23.56 with Indian Blessing and 100-1 outsider Hammadi stalking him on that side of the track. Big City Man and 6-1 Diabolical stayed close to the pace on the infield side of the track. Exiting the chute to join the main oval, 33-1 Force Freeze, who was slow out of the gate, gained on the pacesetters and poked his head in front with Indian Blessing still in contention. Indian Blessing shook him off and got her nose in front at the 1/4 pole, getting the half mile in 45.05, but Big City Man came on again and pulled away from the favorite over the final 1/16 to win by 1 1/4 lengths in a time of 1:08.93. It was a long 5 lengths back to Diabolical third. 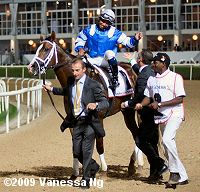 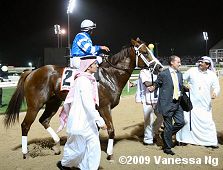 Left: Big City Man and his connections celebrate when he returns after the race.

Right: Big City Man and his connections head for the winner's circle. His jockey Jose Verenzuela said, "I was very confident going into the race. I know the horse well and we'd planned for this race and this night. I did see Indian Blessing coming up but I knew I had it. Everything went perfectly. I’m very, very happy." 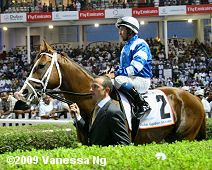 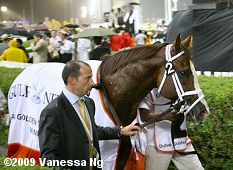 Left: Big City Man heads out of the paddock before the race.

Right: Big City Man heads back to the barn in his winner's blanket. Trainer Jerry Barton said, "It is an exciting win for us. The crew worked really hard and Big City Man is a great horse. We have been trying for a few years. I have trained a second in the World Cup and one in the UAE Derby but this was our first big night winner." 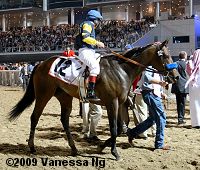 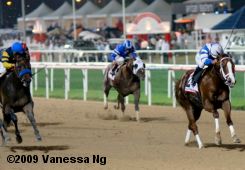 Left: Second place finisher Indian Blessing returns after the race. Her jockey Edgar Prado said, "My filly was trying really hard. Every time I asked her for something she was giving it to me." Prado replaced regular rider John Velazquez who stayed at Gulfstream Park to ride Quality Road to victory in the Florida Derby.

Right: A view of the stretch run to show just how wide Indian Blessing was due to her outside post and the straight course. She probably didn't see the horse come up inside her. 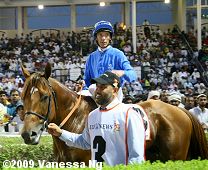 Third place finisher Diabolical in the paddock before the race. His jockey Frankie Dettori said, "I was pleased and he gave his all, he ran a great race. After all, it was the first and second favorites he was chasing, so he was hardly disgraced. We wanted a place and we got it."