The $2 million UAE Derby (G2) is the only age-restricted race on World Cup night, open only to 3-year-olds and meant to be the local prep for American Triple Crown contenders, however southern hemisphere 3-year-olds are recognized as 4-year-olds in the north and are not eligible for the Kentucky Derby. A field of 14 went to post in this 1900 meter (about 1 3/16 mile) trip around 2 turns of the Tapeta main track at Meydan Racecourse, with Australian-bred Musir sent off as the 8-5 favorite off 3 straight wins including the Golden Horseshoe in South Africa and the UAE 2000 Guineas in Dubai. In to challenge him included 9-5 second choice Mendip, undefeated in 3 starts including the Al Bastakiya and is the main Kentucky Derby hope for Godolphin Racing, and 6-1 third choice Raihana, one of 2 fillies in the race, exiting a win in the UAE Oaks last out.

56-1 outsider Solid Choice went to the lead first time past the stands to set the pace, while being stalked by 19-1 Della Barba early. Entering the stretch, the front-runners both tired from their pace battle, allowing Mendip, who raced in midpack early, to gain the lead at the 1/4 pole. Raihana, who also sat midpack early, moved up to take over the lead at the 1/8 pole but her advantage was short-lived, as Musir, who was last early, found room down on the rail at the 3/16 pole and closed with a rush to pass her at the 1/16, drawing off to win by 1 3/4 lengths in 1:57.44, completing a 1-2 sweep for trainer Mike de Kock. It was another 1 1/4 lengths back to Mendip third. 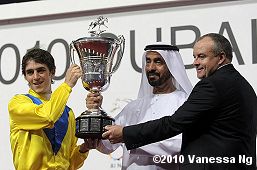 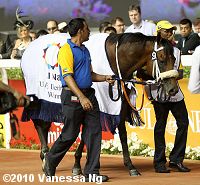 Left: The trophy presentation with jockey Christophe Soumillon on the left and trainer Mike de Kock on the right. Mike de Kock, celebrating his 5th win in the UAE Derby, said, "I wasn't sure that he would stay, to be honest, but Christophe thought he would, and he was right. It is fantastic to have a one two for Sheikh Mohammed (bin Khalifa), and a great result for him as he bred them himself. It's huge. I said before that this was a very very good horse and I hope he'll go very well in Australia. He now knows exactly what to do in the race."

Right: Musir heads back to the barn with his new winner's blanket. 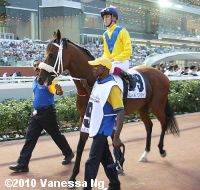 Left: Musir heads out of the paddock before the race. His jockey Christophe Soumillon said, "I was on a horse with huge potential but who was carrying a lot of weight compared to the others and who was going over this distance for the first time. The race worked out for me as I was able to sit behind the good horses and he proved himself very courageous in the straight. He had to go through the gap and finished like a really good horse." 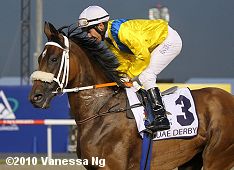 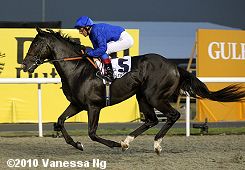 Left: Second place finisher Raihana warms up before the race. Her jockey Kevin Shea said, "What can I say? She was absolutely brilliant. She travelled so well, I thought I was going to win, but not against Musir, he was just too good."

Right: Third place finisher Mendip warms up before the race. His jockey Frankie Dettori said, "We had a mix up on the bend, when Timely Jazz broke down, but he ran an honest race and I'm pleased with him. He was beaten by two nice horses."