The $1 million Godolphin Mile (G2) on Dubai World Cup night featured a field of 14 older horses go 1600 meters (about 1 mile) around one turn of the Tapeta synthetic track at Meydan Racecourse in Dubai. Desert Party was sent off as the even-money favorite off a win in the Mahab Al Shimaal, over 6-1 second choice and Burj Nahaar winner Cat Junior. 7-1 third choice Skysurfers, 5th in the Burj Nahaar last out after winning an allowance, completed the top 3 on the board. 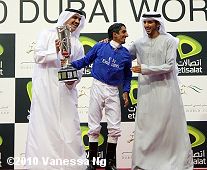 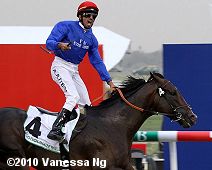 Left: The trophy presentation for the Godolphin Mile. Simon Crisford, racing manager for winning owner Godolphin Racing said, "What a start for Godolphin, and what a day for Mahmoud (Al Zarooni, trainer) and Ahmed (Ajtebi, jockey), who gave Calming Influence such a brilliant ride. He is not easy – he can be hot and run free – but he was in control throughout and I could not be happier for him. Mahmoud, too, has done a lot of hard work on Calming Influence, and it is great for the locals, who also give us so much support. Calming Influence will go back to Europe and be aimed at all the top races. 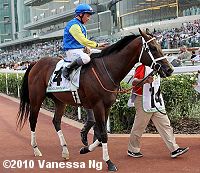 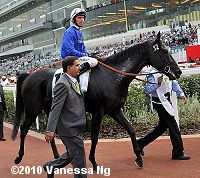 Left: Second place finisher Green Coast heads out to the track before the race. His jockey Tadhg O'Shea said, "He's run out of his skin. He's rated a few pounds below the best of these. He's a hold up horse and he needs daylight, so I had to ride him the way I did. I thought at the furlong pole I might get there, but his run peaked soon after. Still, I'm delighted. It was a terrific run."

Right: Third place finisher Skysurfers heads out to the track before the race. His jockey Ted Durcan said, "Had him in mid-field. Very happy with my position and at the top of the straight, a gap opened up. He went through it but he just flattened out in the last few hundred yards, but for such an inexperienced horse, it was a brilliant effort." 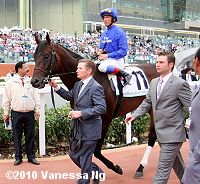 Eleventh place finisher and beaten favorite Desert Party heads out to the track before the race. The even money favorite raced in mid pack early, but failed to respond when asked, finishing 11th. Godolphin racing manager Simon Crisford said, "The only disappointment was Desert Party. He was drawn wide (post 11) and was always doing too much." Jockey Frankie Dettori added, "I had a bad run. I was never in the race." Desert Party was second as the favorite in last year's UAE Derby. He got a second try because they allow 3 and 4-year-olds because so many southern hemisphere horses run there and they are 6 months behind the northern hemisphere horses in age. 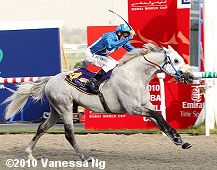 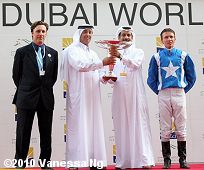 The first race on Dubai World Cup night is the $250,000 Dubai Kahayla Classic (G1), a 2000 meter (about 1 1/4 mile) trip over the Tapeta track for Purebred Arabian horses. Paris Gagner led in the early stages while being stalked by favorite No Risk Al Maury most of the way. Entering the stretch, No Risk Al Maury was asked for run by jockey Richard Hills and he easily passed the tiring Paris Gagner at the 3/16 pole. However, 7-1 Jaafer, who was near the back of the field early, closed with a rush to pass No Risk Al Maury at the 1/16 pole, drawing clear late to win by 5 lengths in 2:13.61. It was another 1 1/4 lengths back to pacesetter Paris Gagner third.

To the left is the trophy presentation for the Kahayla Classic. Winning trainer Julian Smart said, "To bring a horse from Qatar, because I don't think it has ever been won by Qatar, is just amazing. Jaafer has run only one time in his career on the all-weather at Lingfield in England. Meydan suits him. We took him to Longchamp but the straight is too long and that doesn't suit him. This style of running suits him. Adrie rode a great race, real calm. I actually thought he was too far back at one point, but he got him there and won, so what do you say?"

Winning jockey Adrie de Vries said, "Travelled nicely all the way around there. He was a different class. I was not concerned about being well back in the field early. He really loves the ground. It was my first ride at Meydan and to win at the first night was just amazing."