The $5 million Dubai Duty Free (G1) is an 1800-meter (about 1 1/8 mile) trip around one turn of the turf course at Meydan Racecourse in Dubai. A full field of 16 went to post on Saturday night, with last year's runner-up Presvis sent off as the 2-1 favorite off a win in the Jebel Hatta on March 4, the major local prep for the Duty Free. Also in the field were 4-1 second choice Courageous Cat, winner of the Canadian Turf Handicap at Gulfstream after finishing second in the Breeders' Cup Mile, and 8-1 third choice Good Ba Ba, winner of the Hong Kong Mile in December but third in the Stewards Cup and 4th in the Hong Kong Gold Cup since then.

Jockey Willie Supple sent 87-1 outsider Tam Lin to the lead down the backstretch and was stalked by 10-1 Take The Points to the midpoint of the far turn. With 3 1/2 furlongs to go, Tam Lin tired allowing Take the Points to take over the lead into the stretch. Al Shemali, the longest shot on the board at 147-1, came through to pass Take the Points at the 3/16 pole, and was all out to hold off the late-running 18-1 Bankable by 1 1/2 lengths, completing the trip in 1:50.84 over "good-to-firm" turf. It was another 3 1/4 lengths back to 17-1 Imbongi third. Favorite Presvis was near the back of the field early and failed to mount a significant rally, finishing 11th. 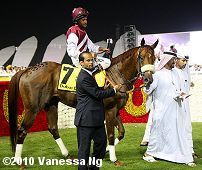 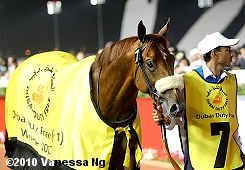 Left: Trainer Ali Rashid Al Raihe leads Al Shemali in the winner's enclosure. Al Raihe said, "This is the best day of my life. It is also the best thing that I have ever, ever experienced as a trainer."

Right: Al Shemali heads back to the barn with his new winner's blanket. 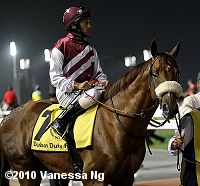 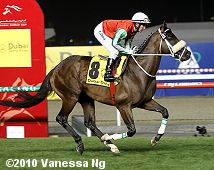 Left: Al Shemali goes out on the track before the race. His jockey Royston Ffrench said, "It was a pleasant surprise but the stable had been in terrific form and I knew he'd stay. It was the case of getting a clear split and we got it. We had a clear passage and once I got in front I knew he'd dig deep. He goes further so I wasn't worried about him stopping. It's the most prestigious win of my career."

Right: Second place finisher Bankable runs out after the finish. His jockey Kevin Shea said, "It was a very good run. The pace was just too slow. The best horse didn't beat us. It was the pace that beat us. But we're happy." Trainer Herman Brown added, "He ran the race of his life. We knew the pace was not going to suit him and he had trouble getting a clear run in the straight but he could hardly have hit the line any better." 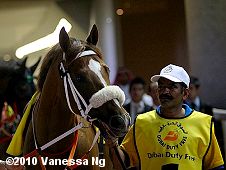 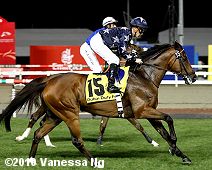 Left: Third place finisher Imbongi in the paddock before the race. His jockey Christophe Soumillon said, "He didn't have too many problems at the gate. The race was going well but the winner took my position as we were moving forward. I thought we were only going to finish fourth or fifth, but this horse is one of the most generous I've ridden and he kept fighting for me."

Right: Eleventh place finisher and beaten favorite Presvis runs out after the race. His trainer Luca Cumani said, "That's racing. It was more like trackwork than a race and at least it didn't take a lot out of him. In a 16-runner race with a short straight, things like that are always going to happen. If we'd gone for the Sheema Classic, we would have had an extra 3 furlongs to recover but if you get blocked over this trip, that is it. He was travelling strongly when it happened and was still on the bridle, but got put in prison."