The $10 million Dubai World Cup (G1), celebrating its 20th renewal, is the world's richest horse race and the highlight of the world's richest day of racing, with $30 million in prize money over 9 races on Saturday night at Meydan Racecourse in Dubai. A compact field of just 9 older horses went to post under clear skies and temperatures in the high 80's for the 1 1/4 mile trip around two turns of the main dirt track. As expected California Chrome was sent off as the 5-4 favorite, winner of the Kentucky Derby (G1), Preakness (G1), and Hollywood Derby (G1) but second in the San Antonio (G2) last out. In to challenge him included fellow American entrant Lea as the 4-1 second choice, second in the Donn (G1) after winning the Hal's Hope (G3), and 13-2 third choice Epiphaneia, last year's Japan Cup (G1) winner but fifth in the Arima Kinen (G1) last out.

Jockey Hideaki Miyuki sent 8-1 Hokko Tarumae to the lead and he set easy fractions of 25.64, 49.45, 1:12.77, and 1:37.99 while pressed by 8-1 African Story and stalked by favorite California Chrome on the outside. Entering the stretch, Hokko Tarumae tired as 14-1 Prince Bishop swept to the lead past California Chrome at the 3/16 marker. Kept to task by jockey William Buick, Prince Bishop won by 2 3/4 lengths in a time of 2:03.24 over the fast track. It was another 1 3/4 lengths back to late running Lea third. Results for US wagering: 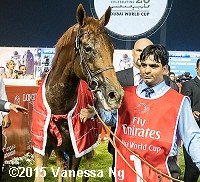 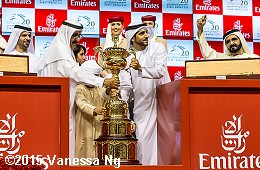 Left: Prince Bishop in the winner's enclosure. Winning trainer Saeed bin Suroor said, "It’s a great result," Bin Suroor exclaimed in between receiving kisses and hugs from many friends who ran to engulf him in the parade ring. I knew the horse had the class to win this race. Some horses improve with age, and it’s great to see him win. This is great for me and for everybody here." 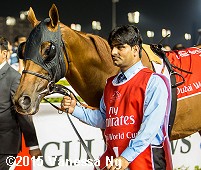 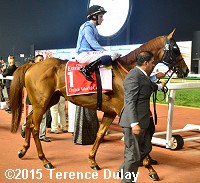 Left: Prince Bishop in the walking ring before the race. Winning jockey William Buick said, "I don't go numb very often but I can't explain what I'm feeling right now. Obviously the horse should have won two Maktoum Challenges. Saeed and the whole team had a lot of faith in him going into the race today. He has a very unorthodox way of racing so I took him out of the kickback in the back and when I got onto California Chrome's tail, he picked up the bridle and listen, he ran on well in the end. He likes the surface now that he has the experience. He is better than he was. This is just nuts."

Right: Prince Bishop heads out for the post parade. 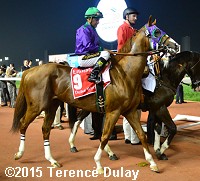 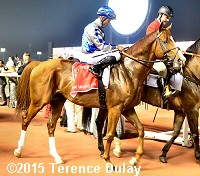 Left: Second place finisher and beaten favorite California Chrome heads out to the track. Jockey Victor Espinoza said, "The other horses were bumping me around in there on the first turn and then on the far turn. He kind of lost of his stride a little bit on the (home) turn because (Hokko Tarumae) pushed me out. That kind of took some of the air out of his lungs. But overall, he ran awesome." Owner Steve Coburn added, "To send our horse halfway around the world to train on a track that he's not familiar with and to run that good, I'm very pleased. These horses over here are tough. They get to train on this track all the time. Sheikh Mohammad invited us to come over because he loves and believes in our horse. To run second behind one of his is a pretty good day."

Right: Third place finisher Lea heads out for the post parade. Jockey Joel Rosario said, "I was on the inside. He didn't like to be there. He kept trying and going. When I turned for home, if I had a little room, I think I could have been second. We weren't going to beat the horse who won. He got the jump on us and was the best. I thought the leaders would tire. He did his best." Trainer Bill Mott added, "We didn't get the cleanest run. He dropped in and saved the ground and kind of got stuck there for awhile. He ran well." 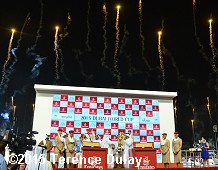 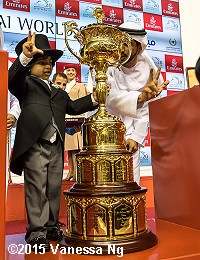 Left: The fireworks behind the trophy stage after the race.

Right: Isn't he cute? The trophy is bigger than he is!