There are two sprints held on Dubai World Cup night, one on the dirt and one on the turf. The $2 million Dubai Golden Shaheen (G1) is the feature sprint event on the card, contested at 1200 meters (about 6 furlongs) around one turn of the main track. Secret Circle was sent off as the 3-1 favorite in the field of 13 off his second place finish in the Palos Verdes (G2). In to challenge him included 7-2 second choice Salutos Amigos, winner of the Tom Fool (G3) and 5-1 third choice Rich Tapestry, 14th last out in the Breeders' Cup Sprint (G1).
7-1 Lucky Nine and Rich Tapestry dueled for the lead down the backstretch and around the far turn through fractions of 23.81 and 46.49 while stalked by Secret Circle to their outside. At the 3/16 jockey Victor Espinoza sent Secret Circle and he surged to the lead through 5/8 in 58.27, and held off late-running 20-1 Super Jockey by 1/2 length for the win in 1:10.64. It was another 1/4 length back to Rich Tapestry third. 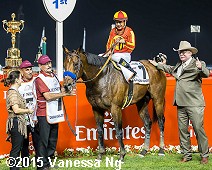 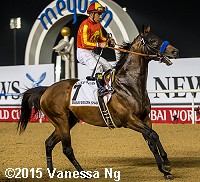 Left: Secret Circle in the winner's enclosure. Winning jockey Victor Espinoza said, "What a thrill. He jumped well and we swung a little wide on the pace with the two Hong Kong horses inside me. The pace was good but we weren't going too fast. Then he gave me a good kick at the top of the stretch and from that point I always felt we were going to do enough to win.”

Right: Secret Circle warms up before the race. Espinoza added, "The second horse came at us strongly but my guy battled real hard. He had the best American form in the race, running so well in Breeders' Cups in the past, and now he has done the same here. He's just a top-class sprinter. He's really tough and he just wants to win.” 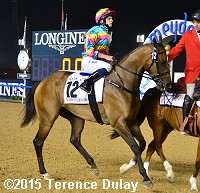 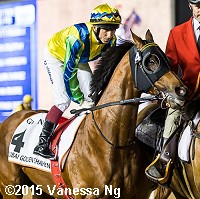 Left: Second place finisher Super Jockey warms up before the race. Jockey Ryan Moore said, "He ran well and was staying on right to the line.”

Right: Third place finisher Rich Tapestry warms up before the race. Jockey Olivier Doleuze said, "I rode him to have a good position throughout the race and he did. He's been very brave and he's tough. He didn't stop at any point and his form has been very consistent. We know he's a horse who has got a lot of speed and we let him use it.”

The $1 million Al Quoz Sprint (G1) is contested at 1000 meters (about 5 furlongs) on the turf straightaway at Meydan. A full field of 16 went to post with Century Sprint Cup (G1) winner Peniaphobia sent of as the 4-1 favorite over 11-2 Sole Power, 12h in the Meydan Sprint (3) last out, and 7-1 Ahtoug, runner-up in the Meydan Sprint.

20-1 Distinctiv Passion and 8-1 Amber Sky were quickest away and got the opening quarter in 23.25 and the half in 45.14 with Peniaphobia giving chase. However, Sole Power, 12th early, took the stands side for room and ran by the field to get the 1/2 length win over Peniaphobia in 57.24. It was another 1/2 length back to 33-1 Green Mask third. 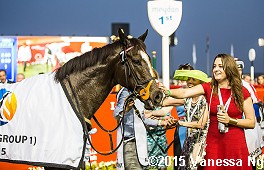 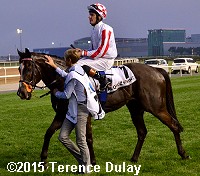 Left: Sole Power in the winner's enclosure. Winning trainer Ed Lynam said, "He's put his CV up for (top European sprinter) today. He has just come to himself, and on his day he was always capable of doing this."

Right: Sole Power returns after the race. Jockey Richard Hughes said, "After his last start I wasn't strong on him as he was lacklustre that day. Edward has worked on him and whatever he has done has paid off. Any winner is special but to win here is great.” 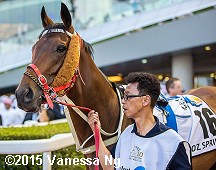 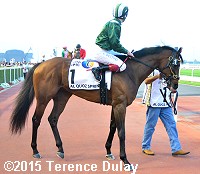 Left: Second place finisher and beaten favorite Peniaphobia in the walking ring before the race. Jockey Douglas Whyte said, "He's run a good race and has run true to form but the winner was too good on the day.”

Right: Third place finisher Green Mask heads out to the track before the race. Jockey Frankie Dettori said, "I was drawn one whereas the winner was toward the middle and the second was over in 16, so he's run a huge race from that gate.”