The $1 million Godolphin Mile (G2) on Dubai World Cup night featured a field of 15 older horses go 1600 meters (about 1 mile) around one turn of the main track at Meydan Racecourse in Dubai. Burj Nahaar (G3) and Firebreak (G3) winner Tamarkuz was sent off as the even money favorite over 8-1 Frankyfourfingers, winner of Maktoum Challenge Round 2 (G2) but fourth in Round 3 (G1), and 10-1 Sloane Avenue, winner of the Hyde Stakes. 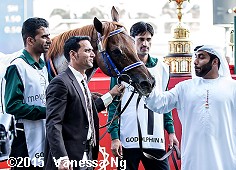 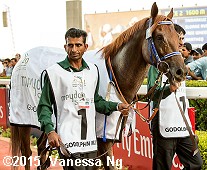 Left: Tamarkuz in the winner's enclosure. Winning jockey Paul Hanagan said, "He's been so good from the stalls lately but this is such a big day, there's a lot to take in."

Right: Tamarkuz heads back to the barn in his new winner's blanket. Hanagan added, "The whole occasion got to him. But he dug in so deeply. I didn't know whether I'd won but when Frankie (Dettori) said, ‘Well done' it made me feel good." 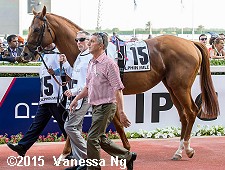 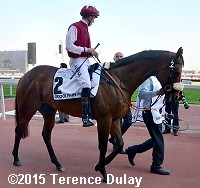 Left: Second place finisher Sloane Avenue in the walking ring before the race. Jockey Frankie Dettori said, "From stall 15 we almost did the impossible. I had a clean run and we made the best of it from where I was. We just got outrun and he has run a great race."

Right: Third place finisher Free Wheeling heads out to the track before the race. Jockey James Doyle said, "It was a cracking run. He's a tough horse and doesn't know how to run a bad race. It was a tough ask on paper but he's risen to the challenge and had a smooth run around, which helps." 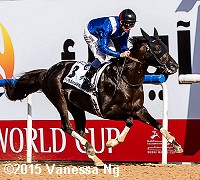 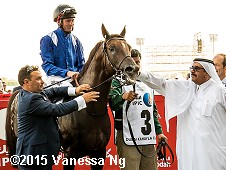 Winning trainer Erwan Charpy said, "Already when he worked last time, Dane said that he was going the right way. Normally he is so buzzy, but he was cool in the pre-parade ring today and I was almost starting to worry, but then he came alive. I looked at the race and thought there was no pace in it. We were drawn three on a lively track, so I told Dane not to worry if he made the running." Jockey Dane O'Neill added, "It's nice to do it for the boss Sheikh Hamdan, who is here. I just wanted him to relax, wherever that happened to be.  He wasn't doing a lot in front and won quite well."