The $6 million Dubai Turf (G1) is an 1800-meter (about 1 1/8 mile) trip around one turn of the turf course at Meydan Racecourse in Dubai. A field of 10 older horses went to post, with Irish Champion (G1) winner The Grey Gatsby sent off as the 3-2 favorite. In to challenge him included 9-4 second choice Solow, winner of 4 straight including the Prix Daniel Wildenstein (G2), and 9-1 third choice Cladocera, winner of the Balanchine (G2). 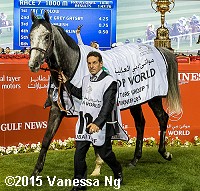 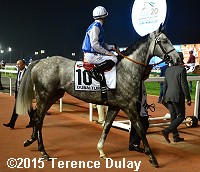 Left: Solow in the winner's enclosure. Winning trainer Freddy Head said, "He is a very good horse. But this was a big test, as it was his first Group 1 race. But I couldn't have had him better and he showed what a good horse he is. Maxime rode him perfectly, very quiet, very cool. This is my first winner in Dubai, it's fabulous. He is one of the best I have trained."

Right: Solow heads out for the post parade. Winning jockey Maxime Guyon said, "Good horses make this job easy. This is my first Group 1 in Dubai so this win is an honour. I had a great race. Before the race we didn't know if there was pace or not, so the trainer told me if there is no one to go in front, you can go in front. But we went fast and I got a good position and he really had a great turn of foot and won very easily tonight." 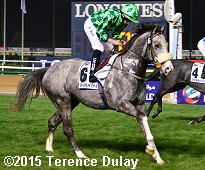 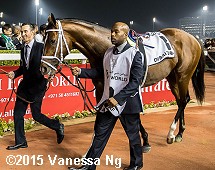 Left: Second place finisher The Grey Gatsby warms up before the race. Trainer Kevin Ryan said, "I was delighted with him. The winner has won well but my horse has run a good race and he’ll come on for it. I’d say we could go on to the Tattersalls Gold Cup at the Curragh now, and hopefully then Royal Ascot."

Right: Third place finisher Mshawish in the walking ring before the race. Jockey Frankie Dettori said, "It was a good race. He was a bit fresh, as you know he had three days in the box with a sore foot. He ran on a good third and I'm delighted. Would he have been closer hadn't he been in the box? Yes, second, but I don't think we would have caught the winner."