The $10 million Dubai World Cup (G1), celebrating its 18th renewal, is the world's richest horse race and the highlight of the world's richest day of racing, with $27.25 million in prize money over 9 races on Saturday night at Meydan Racecourse in Dubai. After defending champion Monterosso scratched the morning of the race, a field of 13 older horses went 2000 meters (about 1 1/4 miles) over the Tapeta main track. 2011 Kentucky Derby winner Animal Kingdom was sent off as the 5-2 favorite off his runner-up finishes in the Breeders' Cup Mile (G1) and the Gulfstream Park Turf Handicap (G1). In to challenge him included 3-1 second choice Hunter's Light, winner of 3 straight including the Maktoum Challenge Round 3 (G1), the major local prep for the World Cup, and 7-2 third choice Royal Delta, winner of 3 races in a row: the Beldame (G1), Breeders' Cup Ladies' Classic (G1), and the Sabin (G3).

Jockey Mike Smith sent Royal Delta to the lead first time past the stands and she set easy fractions of 26.59, 50.02, and 1:13.63 saving ground on the rail while pressed by Animal Kingdom just to her outside and stalked by 75-1 longest shot Side Glance. Entering the lane, Royal Delta tired, allowing Animal Kingdom to inherit a 1 1/4 length lead on Side Glance at the 1/4 pole through a mile in 1:38.88. Jockey Joel Rosario asked Animal Kingdom to open up and he did, extending his lead to 4 lengths over late-running 55-1 Red Cadeaux at the 1/8 pole. Red Cadeaux attemped to close on Animal Kingdom but the winning post came too soon, as Animal Kingdom cruised to a 2 length win in 2:03.21. It was another 4 3/4 lengths back to late-running 16-1 Planteur. 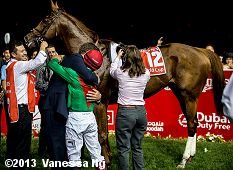 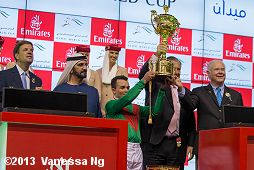 Left: Trainer Graham Motion and jockey Joel Rosario hug in the winner's enclosure. Motion said, "He's just an extraordinary animal. It reminded me of the Derby turning for home." Asked about the decision to stay with Joel Rosario, he added, "I hate to see a jockey get yanked off a horse for one odd race. I think Animal Kingdom has become a more difficult horse to ride as he's gotten older. I think he just surprised Joel. It was a good learning experience for him."

Right: Celebrating with the trophy from left to right: trainer Graham Motion, Mohammed bin Rashid Al Maktoum, jockey Joel Rosario, Australian co-owner John Messara, and co-owner Barry Irwin of Team Valor. Irwin said, "That was shocking. I thought he could win but I didn't think he could win like that. He proved that not only is he a top horse, but that he is one of the top horses in the world. He's a very unique, unusual horse. He's good enough to win any race." Animal Kingdom is the ninth American-trained horse to win the World Cup, and the first to do so at Meydan Racecourse. 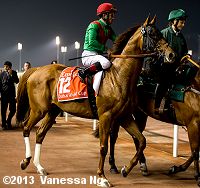 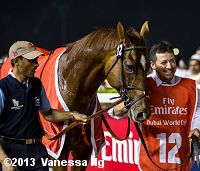 Left: Animal Kingdom heads out for the post parade. Now majority-owned by Australia's Arrowfield Stud, he is expected to start next at Royal Ascot before beginning his stud career in Australia.

Right: Animal Kingdom heads back to the barn with his winner's blanket. Winning jockey Joel Rosario said, "I knew we had a chance. I've never been here before. This is my first time. I watched a lot of races. I had an idea where I needed to go from. I listened to my trainer and to my horse. He's a very good horse. He did it. He's very quick. It seemed like a long way home in the stretch." 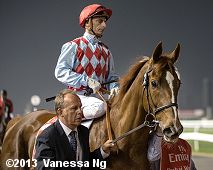 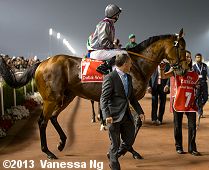 Left: Second place finisher Red Cadeaux heads out for the post parade. Jockey Gerald Mosse said, "This horse never ceases to amaze me. To run second in the Dubai World Cup and get within two lengths of Animal Kingdom, I've got to be happy with that."

Right: Third place finisher Planteur heads out for the post parade. Jockey Ryan Moore said, "He was third last year, third this year. I was happy enough with his run."

Jockey Mike Smith of tenth place finisher Royal Delta said, "My trip was good. She just didn't seem to care for it. Every time she had to pick it up, she struggled. After four or five passed her, we were pretty much done – then we just got home safe."