There are two sprints held on Dubai World Cup night, one on the "dirt" and one on the turf. The $2 million Dubai Golden Shaheen (G1) is the feature sprint event on the card, contested at 1200 meters (about 6 furlongs) around one turn of the Tapeta main track. Al Shindagha Sprint (G3) winner Mental was sent off as the 2-1 favorite in the field of 13 over 3-1 second choice and top American hope Trinniberg, unraced since winning the Breeders' Cup Sprint (G1), and 5-1 third choice Frederick Engels, second in both the Centenary Sprint Cup (G1) and Chairman's Sprint Prize (G1) both in Hong Kong.

11-2 fourth choice Private Zone was quickest away and got the opening quarter in 24.55 while stalked by 66-1 Taisei Legend and Trinniberg. At the top of the lane, Trinniberg gained the lead through 1/2 a mile in 47.94, but soon faded from contention. Reynaldothewizard, gained the lead at the 3/16 pole. 76-1 Balmont Mast, 7th early, put in a strong late rally but Reynaldothewizard held him off by a neck in 1:12.46. It was another 1/2 a length back to 14-1 Krypton Factor third, while favorite Mental checked in 10th. Results Chart for the race from Emirates Racing Authority which includes a link to the video replay. Results for US wagering: 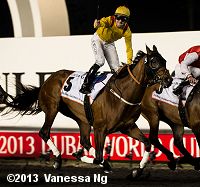 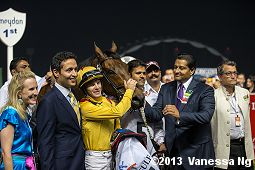 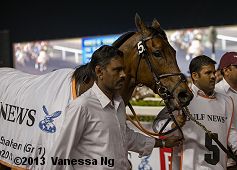 Left: Reynaldothewizard in the winner's enclosure. Jockey Richard Mullen said, "Dubai has given me my best moments in racing but this tops the lot. I'm overjoyed. I do the easy work. I just sit on board and steer and I'm so happy to win a Group 1 on the biggest stage in racing. I was always travelling well and he gave me everything in the stretch. It's unbelievable and I'm so happy for Satish and all his team, and Zabeel Racing, his owners."

Right: Reynaldothewizard heads back to the barn wearing his winner's blanket. 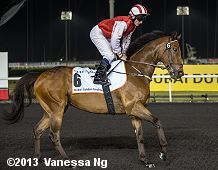 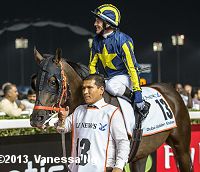 Left: Second place finisher Balmont Mast warms up. Jockey John Murtagh said, "The trainer was very happy with the horse before the race and he was right, because he was ready. I though the winner might falter close home. I'd have caught him if he had, but he didn't. As well as my horse has run, it's always tough to be beaten a neck in a Group 1 race."

Right: Third place finisher Krypton Factor in the walking ring. Jockey Kieren Fallon said, "I was drawn 13 and the wide draw probably cost us getting closer. We've been beaten less than a length but still a very good run."

The $1 million Al Quoz Sprint (G1) is contested at 1000 meters (about 5 furlongs) on the turf straightaway at Meydan. A full field of 16 older horses went to post with Meydan Sprint winner Shea Shea sent off as the 9-10 favorite over 6-1 second choice Sole Power, runner-up of the Meydan Sprint, and 13-2 third choice Varsity, winner of the Gulfstream Park Turf Sprint last out.

121-1 longest shot Ganas was quickest away and he set an opening quarter in 23.63 over the firm course while pressed by Varsity and 20-1 Mr Big in the tightly bunched field. At the 1/8 pole Ganas was already dropping from contention as 60-1 Joy and Fun gained the lead through a half in 44.70. However, favorite Shea Shea, running on the stands side, easily passed him inside the 1/16 pole to win by 3/4 length in a new course record time of 56.41. It was another 3/4 length back to 9-1 Eagle Regiment third. 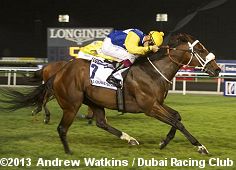 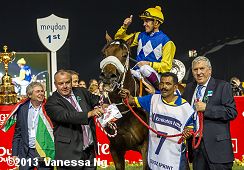 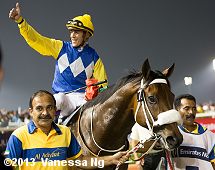 Left: Shea Shea in the winner's enclosure. Trainer Mike de Kock said, "He had the horse to go and fetch and it was just as we'd hoped. Coming here is not easy. The horses do better the longer they are here and horses like him a geared for these type of races. He will now go to Royal Ascot for the King's Stand Stakes."

Right: Jockey Christophe Soumillon celebrates aboard Shea Shea after the race. Soumillon said, "I'm not surprised to win a race like this after his last run because that race was as good as this one. I was confident. He likes to come late and catch them on the line and it worled out perfectly." 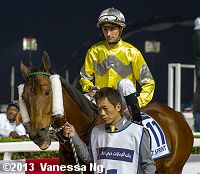 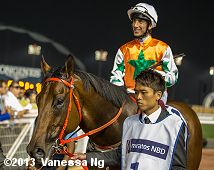 Left: Second place finisher Joy And Fun in the walking ring. Jockey Tye Angland said, "It was so close – he ran so well. He felt like the winner the whole way. I could see Shea Shea coming and he was just too good."

Right: Third place finisher Eagle Regiment in the walking ring. Jockey Olivier Doleuze said, "Yes it was a good performance but I think he could have done better if he hadn't missed two days' work. He got a nail in his hoof and that's why he missed work. I really regret that."