The $10 million Dubai World Cup (G1), celebrating its 16th renewal, is the world's richest horse race and the highlight of the world's richest day of racing, with $26.25 million in prize money over 8 races, before a record crowd of 81,164 at Meydan Racecourse in Dubai. A full field of 14 older horses went 2000 meters (about 1 1/4 miles) around two turns of the 1750 meter (about 1 1/8 mile) Tapeta synthetic oval, with Twice Over sent off as the 9-5 favorite off 2 straight wins, in the Champion Stakes (G1) at Newmarket in October and the Maktoum Challenge Round 3 (G2), the major local prep for the World Cup. In to challenge him included 4-1 second choice Gio Ponti, runner-up in the Breeders' Cup Mile (G1) last out, and 7-1 Buena Vista, the only female in the race, second in the Arima Kinen (G1) last out after being disqualified from first in the Japan Cup (G1).

Jockey Shinji Fujita sent 40-1 longshot Transcend to the lead first time past the stands and he set easy early fractions of 26.70 and 53.10 over the fast track, while being pressed by 8-1 Cape Blanco the whole way. 52-1 Monterosso and 17-1 Gitano Hernando stalked the leading pair third and fourth, while favorite Twice Over sat in mid pack. Transcend continued to lead into the stretch, but 17-1 Victoire Pisa, who raced at the back of the field early, was sent outside for room by jockey Mirco Demuro at the 9/16 pole and steadily gained on the leaders. With 3/16 remaining, Victoire Pisa drew even with the pacesetter, and pulled away in the final furlong to win by 1/2 a length in 2:05.94, completing an all-Japan exacta. It was another 1/4 length back to Monterosso third, 1/4 to Cape Blanco fourth, and 3/4 to the top American finisher Gio Ponti fifth. Favorite Twice Over failed to show any rally and finished a disappointing 9th. 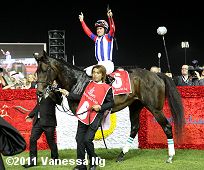 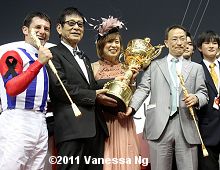 Left: Victoire Pisa in the winner's enclosure. His trainer Katsuhiko Sumii said, "To win the richest race in the world when Japan is going through a tough time is fantastic. I felt the whole country was backing me. This win will bring a lot of hope and bring smiles to Japanese people. Near the finish of the race, I was screaming 'miracle'."

Right: The connections celebrate in the winner's circle. From left to right: jockey Mirco Demura, owner Yoshimi Ichikawa, his daughter Manami Ichikawa, and trainer Katsuhiko Sumii. Victoire Pisa is the first Japanese-trained horse to win the Dubai World Cup. Owner Yoshimi Ichikawa said, "It is a great souvenir to take back to Japan. I was very worried during the race as I didn't know what would happen. I really appreciate the support we have had from all the people in Japan." 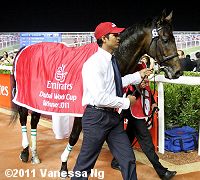 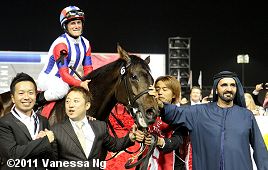 Left: Victoire Pisa heads to the barn in his new winner's blanket.

Right: Victoire Pisa gets a pat from Sheikh Mohammed bin Rashid Al Maktoum. Winning jockey Mirco Demuro said, "My horse usually has a good start, but this time he hit his head in the stall and we had a bad start. But maybe it was lucky because there was a slow pace on the backstretch, so I could find a good position close to the leader. It was a really tight finish. We always believe in him. He's won his last race very easy giving two kilos away. He's a very nice horse. We were hoping to do well, but to win is amazing." 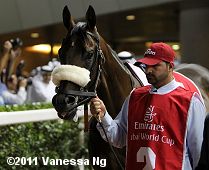 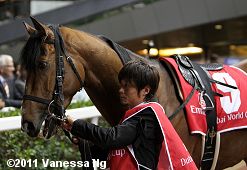 Left: Second place finisher Transcend in the paddock before the race. His jockey Shinji Fujita said, "The horse was shying with the track but he did a very good job. To be beaten by another Japanese runner is an amazing result and a great one for everyone at home."

Right: Third place finisher Monterosso in the paddock before the race. His jockey Mickael Barzalona said, "I'm really delighted with his run but I wish I had more room because I'm sure I could have finished second. The lack of pace worked in my favour because this is not really his trip." Trainer Mahmoud Al Zarooni added, "He was a bit unlucky as he didn't get the gaps, but he is a nice horse and it was a good run." 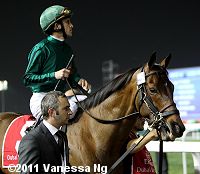 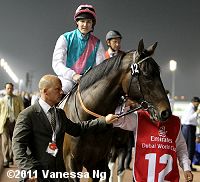 Left: Fifth place finisher and the best American finisher Gio Ponti in the paddock before the race. His jockey Ramon Dominguez said, "This horse is so push button. He's so nice and relaxed. The only two times I can remember him being strong with me was last year here and today. It's very unfair they're going extremely, extremely slow and I feel my horse was taken out of his game. Turning for home his kick, of course, isn't going to be as effective. Everybody was kind of sprinting home."

Right: Ninth place finisher and beaten favorite Twice Over in the paddock before the race. His jockey Tom Queally said, "It was a messy race for everyone and I never got into it at any stage." Trainer Henry Cecil added, "They went very slowly and he couldn't get anywhere. It's disappointing, but that's the way it goes. They slowed it up and shuffled him out at the back and he wants to come off a nice strong pace. He was very well today and I don't like making excuses, but the race went all wrong."