The world's richest race meeting and the world's richest horse race, the $10 million Dubai World Cup, will be conducted at Meydan Racecourse in Dubai on Saturday. On Wednesday evening the post positions were drawn for the Dubai World Cup (G1), which features some of the best older horses in the world going 2000 meters (about 1 1/4 miles) on the main Tapeta synthetic track. Post positions for the big race and the undercard races are available below. An online racecard is available from Dubai Racing Club where you can click on each horse's name to get a form summary. Daily Racing Form has free past performances and other information here. A Form Guide which has past performances for the entire card is also available from Emirates Racing Authority.

As expected, Twice Over is the early favorite at 7-4 at press time, exiting two straight wins in the Champion Stakes (G1) at Newmarket in October and the Maktoum Challenge Round 3 (G2), the major local prep, on March 3. In to challenge him include 4-1 Cape Blanco, unraced since finishing 14th in the Prix de l'Arc de Triomphe, top U.S. hope Gio Ponti, fourth in the World Cup last year and unraced since finishing 2nd behind Goldikova in the Breeders' Cup Mile (G1), as well as sentimental favorite Buena Vista, the 5-year-old mare representing Japan who was nosed out in the Arima Kinen (G1) last out and famously disqualified from the win in the Japan Cup (G1).

Teddy Grimthorpe, racing manager for Twice Over's owner Prince Khalid Abdullah said, "He's shown what he is capable of by winning the Maktoum Challenge from a low position and we expect him to carry forward this form into Saturday's race. Last year he did not have the right build-up and the low draw added to his problems. We got him here early and he won his prep well from an outside position, so hopefully that is a good omen. He's better prepared this year to cope with any obstacle."

The undercard features the two richest turf races in the world, the 2410 meter (about 1 1/2 mile) Sheema Classic (G1) and the 1800 meter (about 1 1/8 mile) Duty Free (G1), worth $5 million each. In the Sheema Classic, Breeders' Cup Turf (G1) winner Dangerous Midge takes on American representative Champ Pegasus off his win in the San Luis Obispo (G2), and Rewilding, unraced since finishing 6th in the St. Leger (G1). Champ Pegasus' trainer Richard Mandella said, "I'm happy with the (7 post). He's a horse that was a maiden a year ago, and he's come a long way to get this far." The Duty Free features Al Rashidiya(G2) winner Presvis taking on Al Fahidi Fort (G2) runner-up Raihana and American hope Victor's Cry, winner of the Citation Handicap (G2) then second in the Thunder Road (G3) last out.

Along with the four Group 1 events, there are 2 Group 2 events and a Group 3 race carded. The $2 million UAE Derby features northern hemisphere 3-year-olds and southern hemisphere 4-year-olds going 1900 meters (about 1 3/16 miles) on the main Tapeta, with Godolphin's Introvert and Splash Point hoping to earn a ticket to Kentucky with a win here. The $1 million Godolphin Mile (G2) is a 1600 meter (1 mile) race on the main track featuring I Want Revenge representing America's IEAH Stable and trainer Rick Dutrow. The first race on Saturday night's card is the $250,000 Dubai Kahayla Classic (G1) at 2000 meters (1 1/4 miles) on Tapeta for Purebred Arabians followed by the $1 million Al Quoz Sprint (G3) at 5 furlongs on the turf straightaway, with Gulfstream Park Turf Sprint winner Stradivinsky the top American hope.

The saddlecloth numbers correspond to post positions barring any late scratches. The World Cup goes off at 1:35PM (all times Eastern), while the first race available for American bettors, the $1 million Al Quoz Sprint (G2) off at 9:15AM. The table to the right has all the post times for the races being simulcast to the US. The first live race at Meydan is the $250,000 Dubai Kahayla Classic for purebred Arabians (post time 8:35AM) and is not available for wagering in the US.

Since betting is illegal in the UAE, the international wagering hub is located in South Africa and their rules apply. Win, exacta, trifecta, superfecta, daily double (Sheema Classic and World Cup), and rolling Pick 3 wagering are the same as the American versions, however, there is no show pool but bets to place pay to third place, like a show bet normally would. Since Dubai won't do odds, the morning line odds shown below are from Ladbrokes in the UK as of Wednesday evening. Odds will probably differ greatly from these as the US horses always get bet more in the tote pool than with UK bookmakers.

The races will be shown live in North America on HRTV in the U.S. and HPI-TV in Canada. Equibase past performances from AmWest Entertainment. 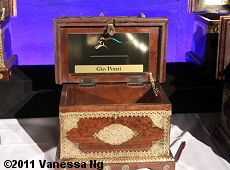 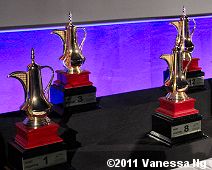 The Dubai World Cup draw used wooden chests with each horse's name inside. A box was chosen then the connections of that horse came up and selected a golden dallah or coffee pot that revealed their post position.