The $2 million UAE Derby (G2) over 1900 meters (1 3/16 miles) is the only age-restricted race on World Cup night, open to 3-year-olds and meant to be the local prep for American Triple Crown contenders, however southern hemisphere 3-year-olds are recognized as 4-year-olds in the north and are not eligible for the Kentucky Derby. It is also worth 100 points under the Road to the Kentucky Derby. Secret Number was sent off as the 9-5 favorite in the field of 12, undefeated in 2 starts including the Al Bastakiya last out. In to challenge him included 7-2 second choice Lines of Battle, unraced since seventh in the Breeders' Cup Juvenile Turf (G1), and 6-1 third choice Shuruq, winner of the UAE Oaks (G3). 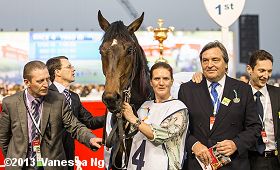 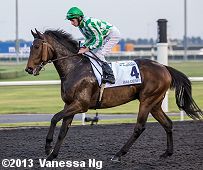 Left: Lines Of Battle in the winner's enclosure. Trainer Aidan O'Brien, who also won this race last year, said, "We wanted the race to be a true test, but it wasn't because of the slow pace, which made it a good win under the circumstances. We are very pleased with him and will now go to the Kentucky Derby."

Right: Lines Of Battle warms up before the race. Jockey Ryan Moore said, "It was a farce of a race. They only cantered to half way. And my horse was only doing what he needed to. I think he was just the best horse in the race." 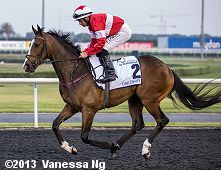 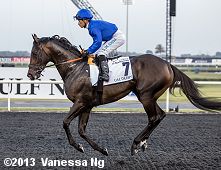 Left: Second place finisher Elleval warms up. Trainer David Marnane said, "He came there with a shout, but I do actually wonder if he stayed. I would like to watch it again. He still has to grow up a little bit more. Took some time to settle. We'll put him away now and I shall now target the Secretariat Stakes (Arlington Park)."

Right: Third place finisher Secret Number warms up. Jockey Silvestre de Sousa said, "He missed the break. I was further back than I wanted to be. I had to come wide and then he ran on well but it wasn't his day."