The world's richest race meeting and the world's richest horse race, the $10 million Dubai World Cup, will be conducted at Meydan Racecourse in Dubai on Saturday. On Wednesday evening the post positions were drawn for the Dubai World Cup (G1), which features some of the best older horses in the world going 2000 meters (about 1 1/4 miles) on the new dirt track which replaced the original Tapeta. Post positions for the big race and the undercard races are available below. An online racecard is available from Dubai Racing Club where you can click on each horse's name to get a form summary. AmWest Entertainment has free past performances here. A Form Guide which has past performances for the entire card is also available from Emirates Racing Authority.

With the return to dirt, the Americans are back in the big dance and as expected California Chrome is the current favorite (at BetVictor at time of writing) at 3-2, despite drawing the far outside post in the field of 9. Victor Espinoza gets the call again for trainer Art Sherrman. In to challenge him include fellow American and Donn Handicap winner Lea, who is 4-1 and will break out of the 5 post under Joel Rosario for trainer Bill Mott, and two horses both at 6-1, defending champion African Story, the top local with James Doyle for Saeed bin Suroor out of the 3 hole, and Japan Cup (G1) winner Epiphaneia. Christophe Soumillon gets the call for trainer Katsuhiko Sumii.

Sherman said, "I love (post 9). Nine is a perfect position for our horse. I've got all the speed horses to the inside of me and he loves to run from the outside. The surface is not a concern – good horses can run on anything even tarmac. Victor knows him really well. I'm just really glad to be here. We've gotten a lot of texts. He's a rock star all around the world.” Owner Steve Coburn added, "We're really happy with (the draw). This has been an amazing journey. You know that building, the world's tallest (Burj Khalifa) building – well take that building times 10 and that's the hospitality we've experienced over here.”

The undercard features the two richest turf races in the world, the 2410 meter (about 1 1/2 mile) Sheema Classic (G1) and the 1800 meter (about 1 1/8 mile) Dubai Turf (G1), now worth $6 million each. In the Sheema Classic, Harp Star takes on Flintshire and Designs on Rome. In the Dubai Turf, Solow is the slight favorite over The Grey Gatsby. Top dirt sprinters go 1200 meters (6 furlongs) in the $2 million Dubai Golden Shaheen (G1), with Bob Baffert trainee Secret Circle taking on Rich Tapestry and Salutos Amigos. The $1 million Al Quoz Sprint (G1) features turf sprinters going 1000 meters (5 furlongs) on the straightaway.

Along with the four Group 1 events, there are 2 Group 2 events and a Group 3 race carded. The $2 million UAE Derby (G2) features northern hemisphere 3-year-olds and southern hemisphere 4-year-olds going 1900 meters (1 3/16 miles) on the main Tapeta, worth 100 points to the winner under the Road to the Kentucky Derby (although 4-year-olds do not qualify), with Mubtaahij and Golden Barows expected to be favoried. The night starts off with the $1 million Dubai Kahayla Classic (G1) for purebred Arabians, followed by the $1 million Godolphin Mile (G2) at 1600 meters (1 mile) on dirt and the $1 million Dubai Gold Cup (G3) at 3200 meters (2 miles) on turf.

The saddlecloth numbers correspond to post positions barring any late scratches. The World Cup goes off at 2:05PM (all times Eastern), while the first race available for American bettors, the $1 million Godolphin Mile (G2) off at 8:40AM. The table to the right has all the post times for the races being simulcast to the US. The first live race at Meydan is the $1 million Dubai Kahayla Classic for purebred Arabians (post time 8:00AM) and is not available for wagering in the US.

Since betting is illegal in the UAE, the international wagering hub is located in South Africa and their rules apply. Win, exacta, trifecta, superfecta, daily double (Sheema Classic and World Cup), and rolling Pick 3 wagering are the same as the American versions, however, there is no show pool but bets to place pay to third place, like a show bet normally would. Since Dubai won't do odds, the morning line odds shown below are from BetVictor at time of writing. 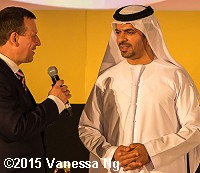 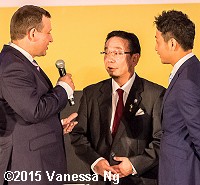 Left: Saeed bin Suroor has two runners in the event, defending champion African Story (post 3) and stablemate Prince Bishop (post 1). He said, "I just hope (Prince Bishop) jumps well. He's been working well and this is his race. (African Story) won this race last year. I'm happy with stall three. He won the Al Maktoum Challenge Round 3. He won this race last year. Good horses go on any surface and this is a very good horse.”

Right: Katsuhiko Sumii, trainer of second choice and Japan Cup winner Epiphaneia said, "He jumps out of the gates really well. This is a good draw (8) to be able to see the inside horses.” 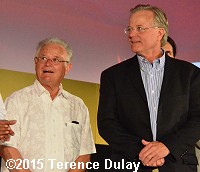 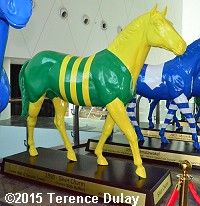 Left: Art Sherman and Bill Mott on stage together after the draw. Mott, looking for his second World Cup after winning the inaugural, said, "We're glad to be here. Proud to have been associated with Cigar who won the first Dubai World Cup and we're excited to be back with Lea. I've heard that speed is a big asset here and he has tactical speed. We'll let him place himself and see what happens. I think we got lucky. We'd have been happy with anything from the middle to outside draw. In a perfect world, we'd have liked to have been outside California Chrome, but we are still in a good spot.”

Right: To commemmorate the 20th Dubai World Cup, horse statues were painted with the winning silks of the first 19 winners. Here is Silver Charm, the 1998 winner.

The statues of all the past Dubai World Cup winners painted in the colors of their racing silks.