The $10 million Emirates Airline Dubai World Cup (G1), celebrating its 22nd renewal, highlights the world's richest day of racing, with $30 million in prize money over 9 races on Saturday night at Meydan Racecourse in Dubai. Conditions were warm in the Emirates, with racetime temperatures in the high 80's, with a cloudless sky, main track rated fast and the turf rated "good". A classy field of 10 older horses went to post for this 2000 meter (about 1 1/4 mile) trip around two turns of the main dirt track. As expected, Travers (G1) and Pennsylvania Derby (G1) winner West Coast was sent off as the 4-5 favorite off his 3rd in the Breeders' Cup Classic (G1) and then a second place finish to Gun Runner in the Pegasus World Cup (G1). In to challenge him included 5-1 second choice Talismanic, winner of the Breeders' Cup Turf (G1) but second in the Hong Kong Vase (G1), and 11-2 third choice North America, winner of the Al Maktoum Challenge Round 3 (G1), the main local prep for the World Cup.

North America missed the start as jockey Christophe Soumillon sent Thunder Snow over to the rail and to the lead through fractions of 25.73, 50.43, 1:13.89, and 1:37.21 while pressed by West Coast and stalked by Mubtaahij. Turning for home, Thunder Snow opened up on the competition through 9f 1:48.95. Kept to task by Soumillon, Thunder Snow poured it on in the final furlong to win by 5 3/4 lengths over West Coast in in a new track record time of 2:01.38. It was just a neck back to Mubtaahij third. Results for US wagering: 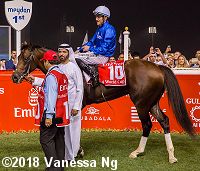 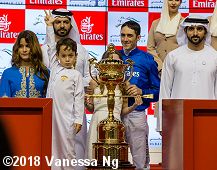 Thunder Snow in the winner's enclosure. Winning trainer Saeed bin Suroor said, "I am very happy with the horse and jockey. I told Christophe the horse has a good turn of foot and I told him to use it. The jockey is the best of the best. When I saw him he was confident in front and I thought surely the horse was going to win from then."

Right: The trophy presentation with Sheikh Mohammed's children with Princess Haya, Jalila and Zayed, on the left. Winning jockey Christophe Soumillon said, "When I came in the straight I could feel nobody was following me. I knew I had to concentrate because when he sees the big screen, he can do something sometimes. It's magic. I work hard every day to make sure someday something crazy like this will happen." 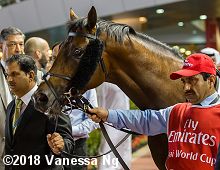 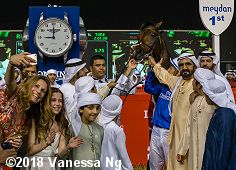 Left: Thunder Snow heads in the walking ring before the race. Soumillon added, "Saeed gave me lot of confidence before the race. I wasn't ready to ride him that positively and I thought there would be more speed on the inside. He jumped so well that I thought I would have to make it. The first time I rode him I thought that when he leads that no-one can beat him, but it is difficult to make it. However, it wasn't that difficult in the end. Saeed did a great job and the horse made everything – it makes the jockey's life so easy when ride you great horses. I'm in heaven now, I'm not sure exactly what's going on but we're going to have a big party tonight."

Right: Selfies with Thunder Snow in his winner's blanket after the race. Bin Suroor added, "We have the best owner in Sheikh Mohammed. He is the best leader and gives us the best horses. It is a brilliant win and I will give the trophy to my mother and brothers and family. It was always on my mind to run him in the Dubai World Cup and he will have a break now, before running in Europe or America." 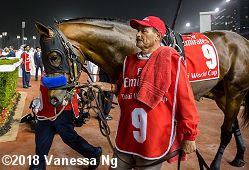 Left: Second place finisher and beaten favorite West Coast in the paddock before the race. Jockey Javier Castellano said, "I had a nice position outside the winner. He was balanced and in a good rhythm. I had every chance in the world to win the race but the best horse clearly won. He fought very hard to the line to keep second place. Very happy with his run." Trainer Bob Baffert added, "Since we started from the inside gate, I wanted to take the lead but the outside horses went faster then he found his stride.  He was in better form than last year and he ran his race, but this is the Dubai World Cup, it is not easy."

Right: Third place finisher Mubtaahij heads out to the track. Jockey Victor Espinoza said, "The early part of the race he wasn't comfortable on the inside. I tried to get him out before the turn, but the door closed. But he tried his very best and I thought we might get second inside the final eighth, but West Coast kept going. He has been second, third and fourth in this race now; it's a pretty neat record."