The highlight of the Saratoga meeting is the $1.25 million Travers Stakes (G1) presented by NYRA Bets, featuring the best 3-year-olds on the east coast going 1 1/4 miles on the main track, with 47,725 fans packing the historic upstate oval. A field of 12 went to post under sunny skies and temperatures in the low 70's, with Jim Dandy (G2) winner Good Samaritan sent off as the lukewarm 15-4 favorite. In to challenge him included 11-2 second choice Irap, winner of the Blue Grass (G1), Ohio Derby (G3), and Indiana Derby (G1) and 6-1 third choice Tapwrit, unraced since winning the Belmont (G1). This edition included the winners of all three Triple Crown races, with Kentucky Derby (G1) winner Always Dreaming at 13-2 and Preakness (G1) winner Cloud Computing at 11-1 joining Belmont winner Tapwrit.

Jockey Mike Smith sent 61-10 fourth choice West Coast to the lead first time past the stands and he set fractions of 23.82, 48.12, 1:12.23, and 1:36.82 while pressed by Always Dreaming and stalked by Irap. Turning for home, West Coast continued to lead, as 24-1 Gunnevera, 11th early under Edgard Zayas, angled out 5 wide to circle the field. Gunnevera finished well but was no match for West Coast who drew off to win by 3 1/4 lengths in 2:01.19 over the fast main track. It was another 2 1/4 lengths back to Irap third, while Good Samaritan cheked in 5th. After the race, Mario Gutierrez aboard Irap claimed foul against Edgard Zayas aboard Gunnevera for interference at the 1/16 pole but the claim was disallowed. 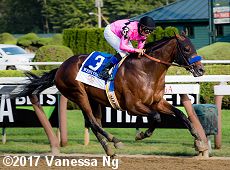 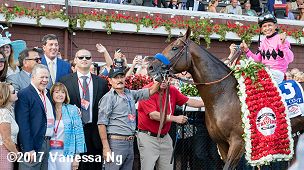 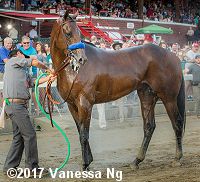 Left: West Coast in the winner's circle. Winning co-owner Mary West said, "This is really exciting. It is like winning the Kentucky Derby to me. It is the same (as winning a Breeders Cup). We were so thrilled when New Year's Day won the Breeders Cup, and this is second only to the (Kentucky) Derby. It doesn't get any better. They are just great trainers. They always get great horses and they somehow manage to win Grade 1 races. My husband (Gary) just said, ride him like he is yours. That is exactly what he said." Gary West added, "This is a race that we watched for probably 40 years we've been in horse racing and obviously it's always one we'd love to have won, and we finally won one. To be honest with you, the race did not unfold the way that I thought it would. I fully expected us to be five or six lengths behind going down the backstretch. Mike came up to me about 15 minutes before the race, and he said, you know, there's not a lot of speed in there. He said, if they give me an easy lead, I'm going to take it. I said, Mike, you take whatever they'll give you and go on with it, and it worked out real well. He rode a hell of a race is all I can tell you."

Right: West Coast gets hosed off after the race. Winning trainer Bob Baffert said by phone from Del Mar, "I'm so proud of my horses today and the way Drefong ran. But that West Coast, what a perfectly named horse. Great name, great horse. So I'm just happy that we were able to pull it off. It's been a tough summer. We lost a lot of our momentum in July. So we're just getting it back again. So it was good to see it carrying again. When I saw him in the paddock (before the Los Alamitos Derby), he looked unbelievable. I mean, I've never seen him look so good, he looked great. You could tell he was like a man amongst boys. He looked the part. I mean, he was a specimen when he came onto that track. And the breeding, his mother, he's out of a great mare. So just coming around. It was just slow coming around. But there was nobody that was going to beat him today." 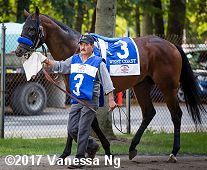 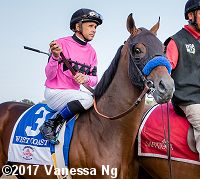 Left: West Coast in the paddock. Winning jockey Mike Smith said, "When Bob texted me before the race he said he is yours, you ride him however you want. So that kind of made me think I could get a little aggressive with him. And that is what I wanted to do with no pace in the race. We warmed him up sharp. And I digged him out of there and he was responsive and after that he was just in such a beautiful rhythm and I said 'oh guys, it's going to be a hard out running from here' and I thank the lord that he ran his race and he came back happy and sound and he didn't turn a hair. We had a whole lot of lows early, and you just have to keep believing, keep riding for the right people and just make the right moves. It is going to come around. And just because you get beat doesn't mean you are doing anything wrong, it just happens in every sport." 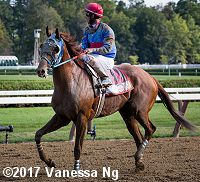 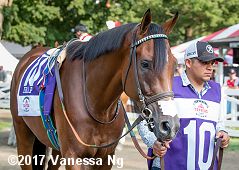 Left: Second place finisher Gunnevera returns after the race. Trainer Antonio Sano said, "I thought my horse should stay up, sure, and there should be no change in the result. As far as (Irap) was way back, so it wouldn't have made a difference. Gunnevera ran very good, I am very proud of him. It was a really good race. We expected first place when we came in, but we're happy with his race. Edgard (Zayas) did a very good with the run, and we're happy with it. We're going to rest and take him to the Breeders' Cup (Classic). l will take the horse back to Florida and not run him until then. He'll just train up to the Breeders' Cup." Zayas added, "The plan was to stay back. I wanted to just go following Girvin and McCracken and try to make a run with them, but they were gaining so much ground, so I swung on the outside and made a run with him."

Right: Third place finisher Irap in the paddock. Jockey Mario Gutierrez said, "It was a good. There was a little bit of an incident in the stretch but beside that I had a pretty good trip. He was a little bit rank today but nothing unusual. He was pretty good. (Gunnevera) did push me down, but I guess the stewards didn't think it was enough to cost me my place, but who knows?" 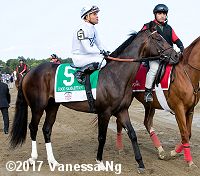 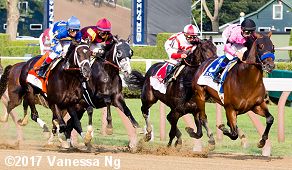 Left: Fifth place finisher and beaten favorite Good Samaritan in the post parade. Trainer Bill Mott said, "We got off to an okay start but the horse dropped an awful way back. He made a huge run towards the end, but he was just a little too far back to get up there." Jockey Joel Rosario added, "I was back more than I wanted him to be. He put a nice run in the end but I think he had a little too much to do. They kind of got away from him."

Right: Shortly after the start of the Travers with West Coast leading followed by Always Dreaming (outside), Tapwrit, and Cloud Computing (rail). Kentucky Derby winner Always Dreaming (7) finished 9th, Preakness winner Cloud Computing (1) finished 8th, and Belmont winner Tapwrit (4) finished 4th. Todd Pletcher, trainer of Tapwrit and Always Dreaming said, "I thought Tapwrit ran really well and kind of finished steadily and didn't have that big burst at the end that we needed. I thought he put forth a good effort. Always Dreaming, he kind of came off the bridle at the half-mile pole. I can't offer much excuse."