Kicking off the Longines Hong Kong International Races for 2017 was the HK$18 million (US$2.3 million) Longines Hong Kong Vase (G1), a 2400 meter (about 1 1/2 mile) trip for older horses over the right-handed turf course at Sha Tin. As expected, 2015 winner and last year's runner-up Highland Reel was sent off as the 2-1 favorite in the field of 12, off his third place finishes in the QIPCO Champion Stakes (G1) at Ascot and the Breeders' Cup Turf (G1). In to challenge him included 5-2 second choice Kiseki, 3-year-old winner of the Kikuko Sho (G1) after finishing second in the Kobe Shimbun Hai (G2), and taking on older horses for the first time here, and 4-1 third choice Talismanic, winner of the Prix Maurice de Nieuil (G2) and Breeders' Cup Turf (G1) but third in the Prix Foy (G2).

Jockey Sam Clipperton sent 39-1 Helene Charisma to the lead first time by and he set fractions of 25.66, 49.98, 1:15.78, and 1:39.52 over the good going while pressed by Highland Reel and stalked by Talismanic. Entering the lane, Helene Charisma tired badly and faded to last, as Highland Reel gained the front through 1 1/4 miles in 2:03.08. Talismatic put in a late challenge for the lead in midstretch but Highland Reel, confidently ridden by Ryan Moore turned him away, drawing off to win by 1 3/4 lengths in 2:26.23. It was another 3/4 length back to late-running 8-1 Tosen Basil third. 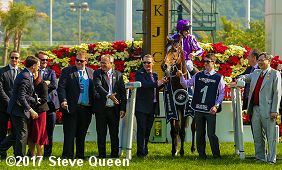 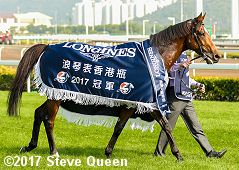 Left: Highland Reel in the winner's circle. Winning trainer Aidan O'Brien said, "He's a very special horse – he's irreplaceable, really. It's very rare that you get a horse that can travel like him. He's been doing it since he was a two-year-old – he won the Champagne (Stakes) at Goodwood as a two-year-old and he's travelled the world in the meantime, so an incredible horse, really. He's irreplaceable for us at home but we were lucky to hold onto him as a five-year-old, we were lucky to get another year out of him," O'Brien said, stressing again that, "a horse like him is irreplaceable."

Right: Highland Reel circles after the race. The win in his final career start moves him up to 4th all-time in the Equibase North American earnings list, just $30,000 ahead of Curlin, the first $10 million earner. He retires to Coolmore Stud with 10 wins in 27 starts in 6 different countries. 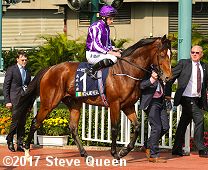 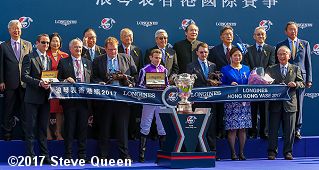 Left: Highland Reel heads for the post parade before the race. Winning jockey Ryan Moore said, "It's been a massive effort from everyone to keep bringing him back for the last three years. He's been all around the world and it's a fitting way for him to finish. He's been a brilliant racehorse. He's always been a very straightforward horse and he gets the trip very well. He's got a lot of good tactical speed and I was always happy and confident. He's the sort of horse, once he gets into a fight, if he's there in a fight long enough he's probably going to prevail. He just dug in the last furlong and then at the line I thought he was going away and comfortable at the finish."

Right: All the connections and officials pose with the trophy and winner's banner after the trophy presentation for the Hong Kong Vase. Moore added, "His record shows he's a very good horse and it's a delight to have been a part of that. He's a high-class horse with a great attitude, very durable, he's raced all around the world, I think the thing that marks him out is his consistency – he usually always runs his best race. He's been a pleasure to ride and hopefully he'll pass that on in the future." 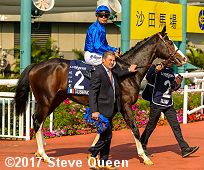 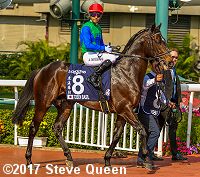 Left: Second place finisher Talismanic heads for the post parade before the race. Jockey Maxime Guyon said, "He ran well. I had the perfect trip behind the winner and I tried to wait as long as possible because my horse only has a short burst of acceleration and that really worked for him in the Breeders' Cup. But I have no excuses, he ran great."

Right: Third place finisher Tosen Basil heads for the post parade before the race. Jockey Joao Moreira said, "Fantatstic run. Had everything perfect during the race. He came up as we turned for home to give them a challenge but they are just too good for him but he ran a fantastic third."