The Longines Hong Kong International Races are the richest horse races run in Hong Kong, and is the last major race day for Thoroughbred flat racing anywhere in the world. Billed as the "Turf World Championships", four Group 1 races were contested on Sunday afternoon over the right-handed 1 3/16 mile turf course at Sha Tin Racecourse. Conditions were excellent, with a good-to-firm turf course, partly cloudy skies, and temperatures in the high 60's, with a crowd of over 78,000 on hand. Hong Kong Jockey Club CEO Winfried Englebrecht-Bresges said, "To have 78,000 people attending is a fantastic result and shows that Hong Kong racing has a genuine vibrancy and is relevant to our customers. We want to stage the greatest show on turf and that is not just today, it is the whole week, starting with the International Jockeys' Championship right through to today. We are happy with what we have achieved and now we must look at ways to set the bar even higher. Today has been the perfect occasion to showcase the quality and vibrancy of Hong Kong racing, and to promote Hong Kong racing as a world brand."

In the main event, a field of 12 older horses contested the HK$25 million (US$3.2 million) Longines Hong Kong Cup (G1) at 2000 meters (about 1 1/4 miles) on the turf. Queen Elizabeth II Cup (G1) winner Designs on Rome was sent off as the 9-10 favorite off a 5th place finish in the Jockey Club Cup (G2), the local prep for this event. In to challenge him included 4-1 second choice Military Attack, second in the Jockey Club Cup after winning the Sha Tin Trophy, and 8-1 third choice Farraaj, third in the Mackinnon Stakes (G1) at Flemington last out.

Jockey Nash Rawiller sent 190-1 longest shot Same World to the leas first time by and he set fractions of 26.22, 51.53, 1:15.97, and 1:39.09 while stalked by 38-1 Criterion and 129-1 Pleasure Gains. At the 3/16 pole Same World tired badly as Criterion gained a short lead at the 1/8 pole. Favorite Designs on Rome, 11th early, and Military Attack, 8th early, rallied together on the outside with Designs on Rome outfinishing Military Attack by a head in 2:01.96 over the good-to-firm turf. It was another length back to Criterion third. 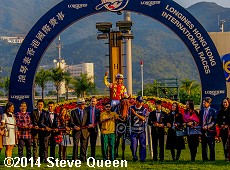 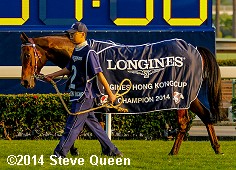 Left: Designs on Rome in the winner's circle after the Hong Kong Cup. Winning jockey Joao Moreira said, "I had two rides on him before this race, and I learnt a lot about him. We put it all together today and got the job done. I had to work hard but he showed me how much ability he's got. He's such a good horse. He's the kind of horse you have to get going on early otherwise he's not going to have enough time to catch up with them. I was able to turn for home not too far off the leaders, and the leaders had gone quite hard. I just had to challenge the horses in front of me, who were hard to get past, but he's proven himself such a good horse and he's got the job done. He does have such a great turn of foot. Military Attack was fighting towards the line but he got there."

Right: Akheed Mofeed heads back to the barn in his winner's blanket. 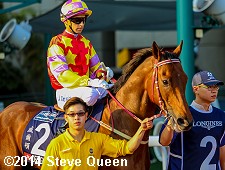 Left: Designs on Rome heads out to the track before the race.

Right: The trophy presentation for the Hong Kong Cup. Winning trainer John Moore said, "We had set him for this, and I said all week I was confident he would peak for this race. Joao (Moreira) had him stoked up at the right time and he was very tough. It was an excellent win and I'd be keen to campaign him overseas." 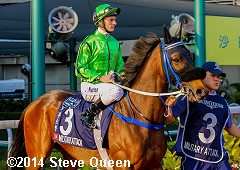 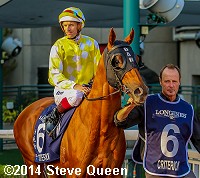 Left: Second place finisher Military Attack heads to the unsaddling enclosure after the race. Jockey Zac Purton said, "My horse ran great but the winner's a very good horse and there were no excuses, he just got us today."

Right: Third place finisher Criterion returns after the race. Jockey Hugh Bowman said, "He ran a super race. He raced much closer to the speed which wasn't really by design but he began well, travelled well, gave a kick and was just run down by two good ones."

All the jockeys and officials at the opening ceremony for the Longines Hong Kong International Races.