The Longines Hong Kong International Races are the richest horse races run in Hong Kong, and is the last major race day for Thoroughbred flat racing anywhere in the world. Billed as the "Turf World Championships", four Group 1 races were contested on Sunday afternoon over the right-handed 1 3/16 mile turf course at Sha Tin Racecourse. Conditions were excellent, with a good-to-firm turf course, partly cloudy skies, and temperatures in the lower 70's, with a crowd of over 70,000 on hand. Hong Kong Jockey Club CEO Winfried Englebrecht-Bresges said, "This is the day when the eyes of the international sporting world are on Hong Kong. We are always trying to improve and set a benchmark for international racing events and today we are very happy with the result. It was a tremendous day for Hong Kong, winning three of the four Longines Hong Kong International Races and this reflects the quality of our racing. Turnover was up (7% from last year) and that is satisfying but this meeting is not about turnover, it is about international sport and it has been a great week of international racing."

In the main event, a field of 12 older horses (after 2 scratches) contested the HK$22 million (US$2.8 million) Longines Hong Kong Cup (G1) at 2000 meters (about 1 1/4 miles) on the turf. Military Attack, third in the Jockey Club Cup (G2), the local prep for this race, was sent off as the 3-2 favorite. In to challenge him includced 2-1 second choice Akeed Mofeed, winner of this year's Hong Kong Derby (G1) but second in the Jockey Club Cup, and 11-2 third choice Cirrus des Aigles, a close second in the QIPCO Champion Stakes (G1) at Ascot last out. 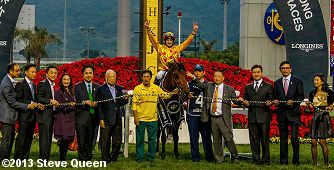 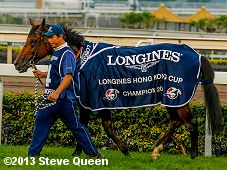 Left: Akeed Mofeed in the winner's circle after the Hong Kong Cup. Winning jockey Douglas Whyte said, "I didn't really want to leave the fence but shortly after the Japanese horse (Tokei Halo) rolled off the inside, he rolled back again. And Christophe (Soumillon) had me very snug on the outside but his horse (Cirrus Des Aigles) gave way and I was able to ease back a half length and come to the outside."

Right: Akheed Mofeed heads back to the barn in his winner's blanket. 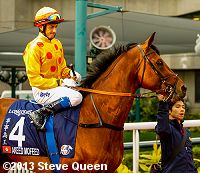 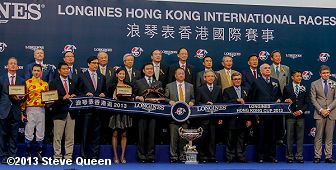 Left: Akeed Mofeed heads out to the track before the race.

Right: The trophy presentation for the Hong Kong Cup. Winning trainer Richard Gibson said, "It's a great privilege to work with top, professional jockeys like Douglas. I did tell him before the race that I would only forgive him for the Mile if he won the Cup. He's a very well bred colt. He needed International Group 1 recognition and he's achieved that today. He's a very talented horse with a stud future ahead of him and racing abroad beckons but we'll consider our options before finalising any plans." 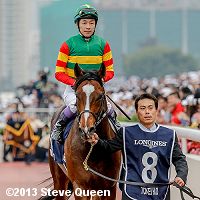 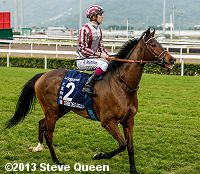 Left: Second place finisher Tokei Halo heads to the unsaddling enclosure after the race. Jockey Yutaka Take said, "He jumped well from the gate and travelled very comfortably with his pace to the turn. It was really close. I was very happy with his performance but my 101st Group 1 win will have to wait until next time."

Right: Third place finisher Cirrus des Aigles returns after the race. Jockey Christophe Soumillon said, "He doesn't act here quite like he does on the softer ground in France. I had a good trip considering our outside draw. He just didn't quicken enough." Trainer Corine Barande-Barbe added, "We regret the bad draw he got because he was wide without cover in the early stages and that must have cost him something at the end. But we're very proud of him and hopefully we will be back next year to try again." 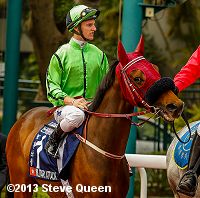 Fourth place finisher and beaten favorite Military Attack heads out for the post parade. Jockey Zac Purton said, "He's not at his best form at the moment and he couldn't quite catch up at the end."