The Cathay Pacific Hong Kong International Races are the richest horse races run in Hong Kong, and is the last major race day for Thoroughbred flat racing anywhere in the world. Billed as the "Turf World Championships", four Group 1 races were contested on Sunday atfernoon over the right-handed 1 1/4 mile turf course at Sha Tin Racecourse. Despite rain earlier in the week, conditions were ideal for racing with a "good" turf course, sunny skies, and temperatures in the mid 70's. Winfried Engelbrecht-Bresges, the CEO of the Hong Kong Jockey Club said, "We have enjoyed a tremendous day's racing, one of the best we have ever staged here on this great occasion. We have an attendance of over 56,000 at Sha Tin, 10,000 more than last year, and the betting turnover was very healthy, the highest for seven years. It all goes to show that Hong Kong racing is vibrant and thriving. It won't be easy to take this meeting to a higher level, but that's what we will strive for." William Nader, Executive Director of Racing added, "Today's meeting was billed as the greatest show on turf and we believe it lived up to expectations. From the standpoint of a sporting spectacle and overall customer experience, the day really showed Hong Kong in very positive light and we are doing Hong Kong proud."

In the main event, a field of 10 older horses contested the HK$20 million ($2.6 million U.S) Cathay Pacific Hong Kong Cup (G1) at 2000 meters (about 1 1/4 miles) on the turf. Locally based Collection, winner of the Cup Trial last out, was sent off as the 9-10 favorite over 5-2 second choice Presvis, winner of the Queen Elizabeth II Cup over the same course in April but winless since, and 6-1 third choice Vision D'Etat, winner of the Prince of Wales's Stakes at Royal Ascot but a distant 10th in the Prix de l'Arc de Triomphe last out. Defending champion Eagle Mountain was dismissed at 18-1, trying to repeat off of one prep where he was 9th in the Mile Trial.

34-1 Queen Spumante was sent to the front early and was pressed by 62-1 Eyshal through slow early fractions of 26.06, 50.47, and 1:14.39. The pair continued to battle to the top of the lane through 1 mile in 1:38.45 but their pace duel took its toll as both tired and dropped from contention at the 3/16 pole. Vision d'Etat, who was 6th early, came out for run into the stretch and took over the lead at the 1/8 pole. Collection, 7th early, came through on the inside at the 3/16 to pass tiring horses and closed with a rush but was no match for Vision d'Etat, who was all-out to hold him off by 3/4 length at the line, completing the trip in 2:01.86 over the good turf course. It was another 2 1/2 lengths back to late-running Presvis third. 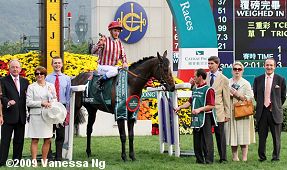 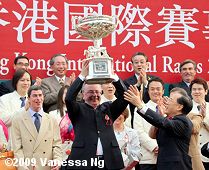 Right: Owner Jacques Detre celebrates with the Hong Kong Cup tropy while trainer Eric Libaud watches on the left. Libaud said, "It's amazing because yesterday we thought he would not run as he had developed an infection to his off-hind fetlock. But we looked after him throughout the rest of the day and it improved. This morning he did a small canter on the all-weather and it was very reassuring to see him moving well so we decided to go ahead. The Club's vets did a terrific job and I have to thank them very much. As for our next race, he will stay in training and we'll have to think about Dubai next." 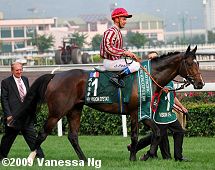 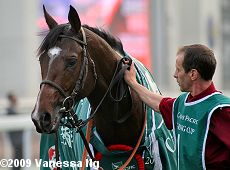 Left: Vision d'Etat parades with his winner's sash after the race. His jockey Olivier Peslier, winning his record 7th Hong Kong International race said, "He was bit lazy down the backstretch but he behaves like this when he is at his best, like at Royal Ascot when he won the Prince Of Wales's Stakes in June this year. But this is what he does when he is relaxed and when he is in good form. I didn't want to get to the lead too soon because I was worried he would try to stop but he kept fighting to the line today."

Right: Vision d'Etat heads back to the barn after the race. 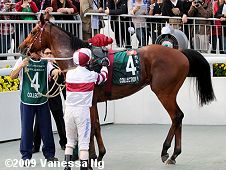 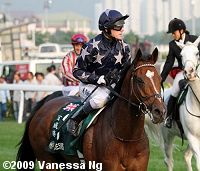 Left: Second place finisher and beaten favorite Collection gets unsaddled after the race. His jockey Darren Beadman said, "Gosh, the winner was impressive. He came past me with his ears pricked but we have run right up to our best."

Right: Third place finisher Presvis returns after the race. His jockey Kieren Fallon said, "He is not there yet but has run a good race and will come on for it. We are happy." Trainer Luca Cumani added, "He has needed this race and will be better for it. We'll head to Dubai and decide which race to go for after the trials on the sand and grass." 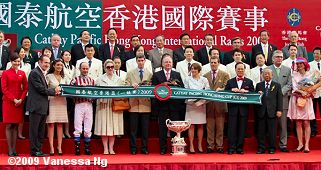 All the connections and officials pose with the trophy and winner's banner after the trophy presentation for the Hong Kong Cup.