Kicking off the Cathay Pacific Hong Kong International Races for 2009 was the HK$14 million ($1.8 million U.S.) Cathay Pacific Hong Kong Vase (G1), a 2400 meter (about 1 1/2 mile) trip for older horses over the right-handed turf course at Sha Tin. Prix Foy winner Spanish Moon was sent off as the 8-5 favorite in the field of 13 exiting a fourth place finish in the Breeders' Cup Turf. In to challenge the Juddmonte Farms homebred included three-time Arc runner-up Youmzain at 9-2, beaten just 2 lengths by Sea the Stars last out, and undefeated 3-year-old filly Daryakana at 6-1, winner of the Prix de Royallieu last out and taking on males in stakes company for the first time.

Jockey Brett Doyle sent 29-1 Packing Winner to the lead first time past the stands, and he set easy fractions of 26.05, 50.07, and 1.15.30 while being stalked by 100-1 longest shot Jackpot Delight and 66-1 Black Mamba down the backstretch. After a mile in 1:39.53, Jackpot Delight briefly poked a head in front. Entering the stretch, the pacesetters tired and faded from contention, as 8-1 Cirrus Des Aigles moved up to take a short lead. Spanish Moon on the rail and 10-1 Jaguar Mail to his outside came through between horses at the 1/8 pole to the front looking like they would battle for the win. However, Daryakana, who was last down the backstretch, closed with a rush down the center of the course to nail Spanish Moon by a head in the final strides, getting the win in 2:27.51 over the good turf course. It was just a neck back to late-running 44-1 Kasbah Bliss third, and another neck back to Jaguar Mail fourth. 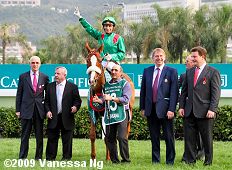 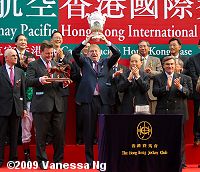 Left: Daryakana in the winner's circle with trainer Alain de Royer-Dupre on the far left.

Right: Georges Rimaud, manager of owner the Aga Khan's studs, celebrates with the Hong Kong Vase trophy. Winning trainer Alain de Royer-Dupre said, "We decided to bring he here when she quickened really well to win the Prix de Royallieu and it's great to win another big race in Hong Kong with another great filly after Pride in the Cup a few years ago. It seems like I can only win with the fillies. For a 3-year-old she travelled very well and when I saw her early in the week, I thought she was perfect. When she won her Group 2 at Longchamp I started to think of this race here. She will stay in training as a 4-year-old." 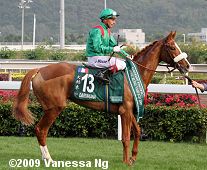 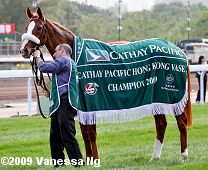 Left: Daryakana parades with her winner's sash. Her jockey Gerald Mosse said, "I had a lot of horse under me and the pace was ok so I was happy to sit at the back. I knew she had a great turn of foot and I was always happy in the straight that I would get there. I was able to gradually pick them up and she flew in the final 100 meters (1/16 mile) to lead on the line. She is a superb long distance filly. This filly has a heart bigger than herself. She's among the best I've ridden." At the time, Mosse's win tied Olivier Peslier's record of 6 Hong Kong International race wins, but Peslier regained sole possession of the record when he won the Hong Kong Cup later in the card for a total of 7 wins.

Right: Daryakana prepares to return to the barn with her new winner's blanket. 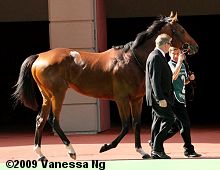 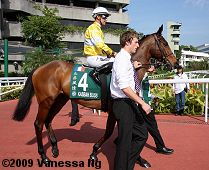 Left: Second place finisher and beaten favorite Spanish Moon in the paddock before the race. His jockey Ryan Moore said, "He has run a great race, done nothing wrong. I got mugged on the line. There was no chance to fight back then. He has beaten everything else around him but the filly (Daryakana) came very wide and late and she was the one that was unexposed and open to improvement. But it's still a great run from my fellow who is a true Group 1 horse."

Right: Third place finisher Kasbah Bliss heads out for the post parade. His jockey Thierry Thulliez said, "He was held up at the last bend behind Youmzain which is a bit of shame because if he could have accelerated earlier and that would made a difference. It's the best race of his career." 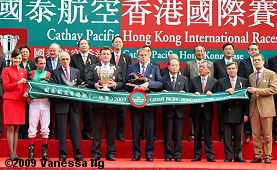 All the connections and officials pose with the trophy and winner's banner after the trophy presentation for the Hong Kong Vase.