The shortest of the International Races at Sha Tin is the HK$12 million ($1.6 million U.S.) Cathay Pacific Hong Kong Sprint (G1) at 1200 meters, the richest 6 furlong turf sprint in the world. Top local horse and KrisFlyer International Sprint winner Sacred Kingdom was sent off as the 3-2 favorite in the full field of 14, exiting a runner-up effort in the Sprint Trial, over 4-1 second choice All Silent, winner of the Gilgai Stakes and the Patinack Farm Classic, and 8-1 third choice Scenic Blast, winner of the King's Stand Stakes at Royal Ascot but 16th in the Sprinters Stakes in Japan last out. Breeders' Cup Turf Sprint winner California Flag was all but dismissed as the 10-1 fifth choice on the board.

As expected, jockey Joe Talamo sent California Flag to the lead immediately, and he set quick fractions of 24.33 and 46.39 taking the ground-saving trip on the rail while being stalked by 40-1 Laurel Guerreiro to his outside down the backstretch and around the turn. Entering the stretch, California Flag opened up a 2 length lead by the 3/16 pole, but the pace set the race up for the closers. Sacred Kingdom, who sat in fifth early, came outside for room and quickly gained on the tiring California Flag, passing the pacesetter just outside the 1/8 pole. 9-1 fourth choice One World came on late but was left with too much ground to make up as Sacred Kingdom finished 1/2 a length in front in 1:09.16 over the good turf course. It was just a neck back to 20-1 shot Joy and Fun third, and another 3/4 length to 13-1 Green Birdie fourth, completing an all-Hong Kong superfecta sweep. California Flag faded late to finish fifth with the best foreign result, beaten just 1 3/4 lengths. 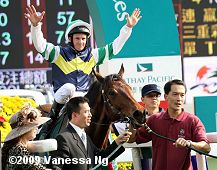 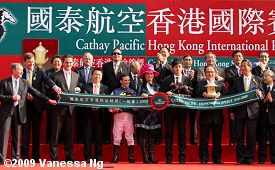 Right: All the connections and officials pose with the trophy and winner's banner after the trophy presentation for the Hong Kong Mile. Winning trainer Ricky Yiu said, "I felt the same before the race as I did before he won in Singapore earlier in the year. He was in good condition, training well and we just needed the luck in running and Brett did a brilliant job. To win this race for the third time is a real thrill, too." 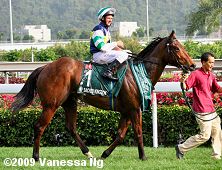 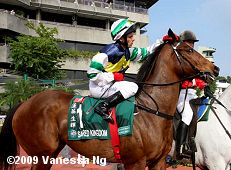 Left: Sacred Kingdom parades for the fans with his winner's sash. Sacred Kingdom is the 8th straight winner of the Hong Kong Sprint to be locally trained. He also won this race in 2007 but missed last year's running.

Right: Sacred Kingdom heads out for the post parade. His jockey Brett Prebble said, "I had a lovely run in midfield but I didn't want to get there too quickly. When I was coming off their backs at the top of the straight, I had to get count to ten because he's getting smarter as he gets older and he nearly pulled up on me there in the end. To be honest, I expected he would perform like that but it's great when it all works out." 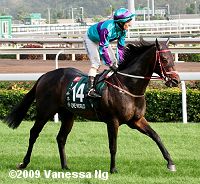 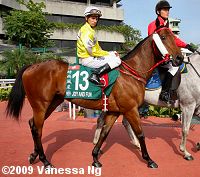 Left: Second place finisher One World returns after the race. His jockey Darren Beadman said, "He's run out of his skin. He'd have won with a better gate, we'd have been a few positions closer, and with the way he finished that would have been enough. I was behind Inspiration in the run and if he had been able to take me into the race a little longer it would also have made a difference."

Right: Third place finisher Joy and Fun heads out for the post parade. His jockey Brett Doyle said, "Had a nice run on the rails, quickened up really well, but he died in his run the last twenty meters or so, but still a huge run for a horse that's better over 1400 meters (7 furlongs)." 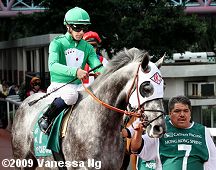 Fifth place finisher and pacesetter California Flag heads out to the track before the race. His jockey Joe Talamo said, "If I hadn't had the Japanese horse (Laurel Guerreiro) taking me on, we might have been able to hang on. He was always making me do too much."