In the HK$16 million ($2.1 million U.S.) Cathay Pacific Hong Kong Mile (G1), the world's richest turf mile race, a full field of 14 older horses contested the 1600 meter (about 1 mile) trip around one turn of the Sha Tin turf. Happy Zero, winner of both the Sha Tin Trophy and the Sprint Trial, both over this course, was sent off as the 9-10 favorite over 5-2 second choice and two-time champion Good Ba Ba, winless since the Steward's Cup in January and 3rd in the Mile Trial last out, and 12-1 third choice Fellowship, winner of the Mile Trial after finishing 6th in the Sha Tin Trophy.

Jockey Felix Coetzee sent 18-1 Egyptian Ra to the front soon after the start and he set early fractions of 25.02, 47.52, and 1:11.04 over the "good" surface while being stalked by 16-1 Able One and 21-1 Sight Winner. At the top of the stretch, Able One moved up to challenge at the 3/16 pole and the pair briefly battled for the lead before both tired. Good Ba Ba, who was near the back of the field in the early stages, came out wide for run at the top of the stretch and closed with a rush to take the lead at the 1/16 pole. Favorite Happy Zero put in a strong rally of his own from well back but Good Ba Ba held him off late by 1/2 a length to pull off the three-peat in 1:34.60. It was just a head back to Fellowship third, while pacesetter Egyptian Ra was just another neck back in fourth. 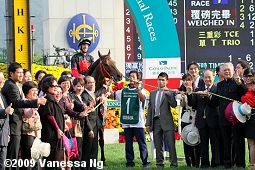 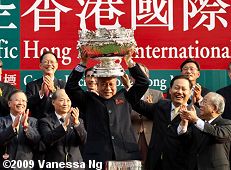 Right: Owner John Yuen Se Kit celebrates by putting the Hong Kong Mile trophy on his head. Winning trainer Derek Cruz said, "It's the highlight of my career without a doubt. It's awesome. We planned the same two prep runs for this race and my job was to keep him happy. But the fact that he would make history if he won this race did make it harder and created pressure for me. But we've done it and it feels awesome." 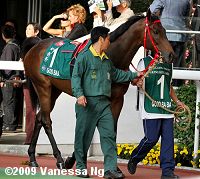 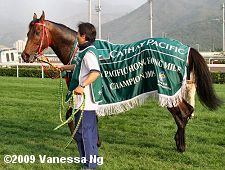 Left: Good Ba Ba in the paddock before the race.

Right: Good Ba Ba heads back to the barn wearing his third Hong Kong Mile winner's blanket. His jockey Olivier Doleuze said, "Last year I was sorry to lose the ride so to be back on him again is like a dream. His preparation this season was similar to last year when Andreas (Schutz) trained him. It looks like he might stay a bit longer now, now we can step him up in trip to maybe 2000 meters (1 1/4 miles) because it took him a little longer than normal to really get going from the top of the straight. I believed he could get there though. What a horse." 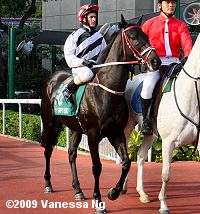 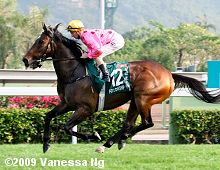 Left: Second place finisher and beaten favorite Happy Zero heads out to the track before the race. His jockey Darren Beadman said, "He had his chance but the winner was too good. I thought we had it at the 300 meters (3/16 pole) but Good Ba Ba came past me. He's an amazing horse to do what he has done."

Right: Third place finisher Fellowship warms up before the race. His jockey Zac Purton said, "He ran the race of his life. To nearly win this race at level weights, it has to be his best ever run. He was brilliant. We were just touched off." 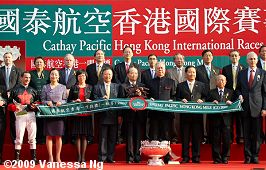 All the connections and officials pose with the trophy and winner's banner after the trophy presentation for the Hong Kong Mile.