At Happy Valley Racecourse in Hong Kong on Wednesday night, a triple dead heat for win occurred as Christophe Lemaire, John Murtagh, and Ryan Moore tied with 12 points each at the end of the Cathay Pacific International Jockeys' Championship. The three jockeys shared the HK$300,000 ($38,700 US) total prize money equally as a result. Jockeys were awarded 12 points for a win, 6 points for second, and 4 for third, and competed in three races over the 7 furlong right-handed turf course with randomly assigned mounts under handicap weights. Matthew Chadwick, with a 2nd and 3rd place finish, was fourth with 10 points.

In the first leg, Lemaire, aboard 4-1 shot Bobo Win, raced in midpack the whole way in the 1650 meter (about 1 mile) race, came out at the 1/4 pole to pass tiring horses to get the win by 1 3/4 lengths over Perfect Ten and jockey Howard Cheng. William Buick aboard Fujian Prince finished third. In the second leg, Murtagh, riding 3-1 Master Dreamer, saved ground on the rail close to the pace in the 1800 meter (about 1 1/8 mile) event, then came through between horses at the 1/8 pole to win going away by 1 1/2 lengths over Matthew Chadwick aboard Jolly Wongchoy and Hugh Bowman aboard Olympicship. In the third and final leg of the competition, Moore kept 40-1 longshot Ming's Hero well back early, and then closed with a rush down the center of the course to nail Moon Chaser and jockey Andreas Suborics by a nose in the 1650 meter race. It was another 2 1/4 lengths back to Matthew Chadwick riding Lasker in third.

French representative Lemaire, who will not be able to ride on Sunday in the International Races as he will be serving a suspension handed down by the Tokyo stewards last weekend, said, "Winning here is much appreciated after my misfortunes of last weekend in Japan. There is a special atmosphere at Happy Valley and I really enjoy riding here. It was a great thrill to share it with Johnny and Ryan."

Murtagh, representing Ireland added, "This three-way tie is a great result! I tried my utmost to get a place in the last but just couldn't. The handicapper has done a very good job (with the weight assignments), and made this event very competitive."

English jockey Ryan Moore, who won his first Happy Valley race in the final leg of the competition, said, "It was nice to win here. Happy Valley hasn't been lucky for me in the past but I was riding lucky number 8!  I am only sorry that I couldn't have laid up closer on my mounts in the first two legs."

The North American contingent, both also known for their appearance in the Animal Planet documentary "Jockeys", did not do well at all, each failing to finish in the money in any race and thus earning no points. American Joe Talamo, who will ride California Flag in the Hong Kong Sprint on Sunday, finished 12th in the first leg, 10th in the second, and 4th in the third. Canadian Chantal Sutherland was 7th in the first, 12th in the second, and 5th in the third. This was probably disappointing to the organizers as they had promoted her appearance heavily, even running a contest for fans to come up with a Chinese name for her: So Sin-tung. Defending champion and locally based Douglas Whyte, the only 3-time winner of the contest, also scored zero points which is unsual for him. 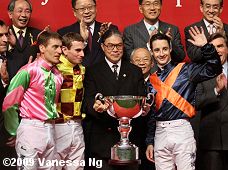 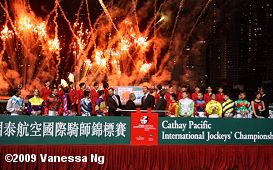 Left: The three co-winners celebrate with the Jockey Championship trophy which was presented by Timothy Fok, President of the Sports Federation & Olympic Committee of Hong Kong. 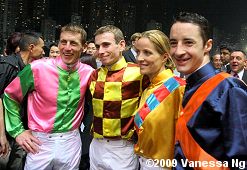 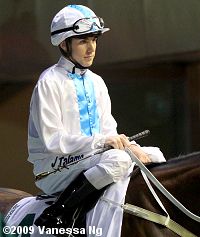 Right: US Jockey Joe Talamo looks pretty solemn in the paddock aboard his final mount of the competition. He had his best finish of the night in that race, placing fourth. He will ride California Flag in the Hong Kong Sprint on Sunday.

All the jockeys pose on stage after the competition.