The Longines Hong Kong International Races are the richest horse races run in Hong Kong, and is the last major race day for Thoroughbred flat racing anywhere in the world. Billed as the "Turf World Championships", four Group 1 races were contested on Sunday afternoon over the right-handed 1 3/16 mile turf course at Sha Tin Racecourse. Conditions were excellent, with a good turf course, sunny skies, and temperatures in the lower 70's, with a crowd of over 70,000 on hand. Hong Kong Jockey Club CEO Winfried Englebrecht-Bresges said, "We have been trying to establish the Turf World Championships brand and today's event has been a tremendous and truly international competition if you look at the winners having connections from the UK, Japan and Hong Kong. It was a great day of racing, and from the financial and attendance point of view it was tremendous. It was our highest attendance since our International Races all became Group 1 in 2002, which I think is extremely important for us and our fan base – if one looks back 10 years this is a great result for us in the context of the competition's fascination factor."

In the main event, a field of 11 older horses (after 2 scratches) contested the HK$22 million (US$2.8 million) Longines Hong Kong Cup (G1) at 2000 meters (about 1 1/4 miles) on the turf. Defending champion California Memory was sent off as the 8-5 favorite off his win in the Jockey Club Cup (G2), the main local prep for this race. In to challenge him included 9-2 second choice Carlton House, fourth in the Queen Elizabeth II Stakes (G1) at Ascot, and 5-1 third choice Zaidan, off his third place finish in the Jockey Club Cup. 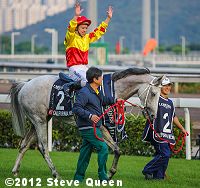 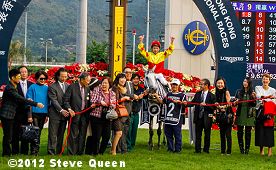 Left: California Memory heads to the winner's circle while winning jockey Matthew Chadwick celebrates. Chadwick said, "I'm over the moon right now. It's incredible. He's a great little horse. It's all about him, I'm just lucky to be part of it all."

Right: The winner's circle celebration for the Hong Kong Cup. 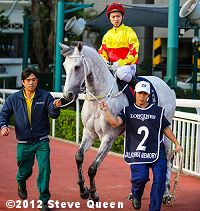 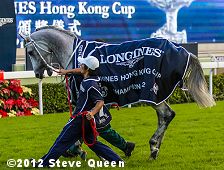 Left: California Memory heads out to the track before the race.

Right: California Memory kicks up his heels as he heads back to the barn after the race. Winning trainer Tony Cruz said, "He showed great acceleration, and showed his authority today. When he quickened Matthew said he put everyone to bed. And then he started to idle in front, and the horse started thinking 'where is everybody?'. But when they started to come back to him he thought I'd better go a bit faster again. We have to give credit to the vet Ben Mason, because the horse has had his niggles and been lame many times, but he fixed the problem." 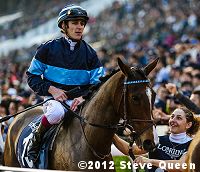 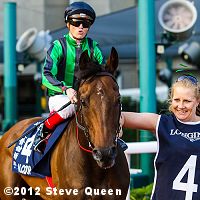 Left: Second place finisher Giofra heads to the unsaddling enclosure after the race. Jockey Christophe Soumillon said, "Had we got a better draw we would have won the race. The winner took off when we were still struggling to get out of there and by the time I could go, we were six lengths back. However she showed that she was up to the task and hopefully could emulate Pride, that is come back here and win the Cup!"

Right: Third place finisher Alcopop heads out for the post parade. Jockey Craig Williams said, "He jumped in the air at the start and copped an early check. It turned into a sit and sprint and he was excellent in the closing stages. There was some quality horses and you've got to be proud of him."