The Cathay Pacific Hong Kong International Races are the richest horse races run in Hong Kong, and is the last major race day for Thoroughbred flat racing anywhere in the world. Billed as the "Turf World Championships", four Group 1 races were contested on Sunday afternoon over the right-handed 1 3/16 mile turf course at Sha Tin Racecourse. Conditions were excellent, with a "good-to-firm" turf course, sunny skies, and temperatures in the lower 60's, with a crowd of 67,153 on hand. Hong Kong Jockey Club Executive Director Bill Nader said, “The one thing that stood out today and also on Wednesday night (International Jockeys’ Championship) is the great atmosphere in Hong Kong racing at our big races. When you think of the great occasions worldwide, this has to stand up among the top, in among the elite, and we are very proud of that.” HKJC CEO Winfried Engelbrecht-Bresges added, "The turnover has reached HK$1.24 billion, which is an increase of 17% over last year. That is the highest since 1998. We had a terrific day for Hong Kong racing and a terrific day for Hong Kong! That shows that our strategy of having simulcast races, familiarising people with overseas horses, is key."

In the main event, a field of 10 older horses contested the HK$20 million (US$2.6 million) Cathay Pacific Hong Kong Cup (G1) at 2000 meters (about 1 1/4 miles) on the turf. Top local hope Ambitious Dragon was sent off as the 11-10 favorite, exiting a close second in the Jockey Club Mile (G2) after winning the National Day Cup. In to challenge him included 5-2 second choice Cirrus des Aigles, winner of the QIPCO Champion Stakes (G1) at Ascot last out, and 7-2 third choice California Memory off his close 4th place finish in the Jockey Club Cup, the major local prep for this race.

Jockey Gerald Mosse sent 17-1 Pure Champion to the lead and he set very slow fractions of 27.38, 53.35, 1:18.47, and 1:42.64 while pressed by 51-1 Zazou and California Memory. At the 1/4 pole, Zazou moved up to challenge along the rail while Ambitious Dragon closed on the outside. The pair duelled briefly but California Memory came through between them to win by a 1ength over 16-1 Irian in a time of 2:04.57. It was another 1/4 length back to Zazou, while favorite Ambitious Dragon faded late to finish a head back in fourth. 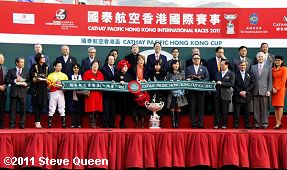 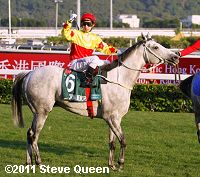 Left: California Memory heads to the winner's circle. Trainer Tony Cruz said, "The key is this horse's acceleration. He is a better and stronger horse in every way this season and I am lucky to train him. Whether the pace is fast or slow, he can really accelerate at the end of his races. He will be going for all the big local races but I would also like to go to Singapore and Dubai. And it's great to see a local boy who can win these races and I'm going to give him these opportunities."

Right: The trophy presentation for the Hong Kong Cup with trainer Tony Cruz on the far left. 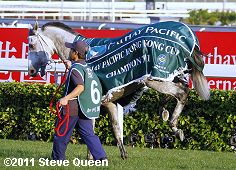 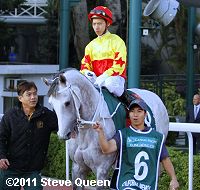 Left: California Memory heads out to the track before the race. Jockey Matthew Chadwick said, “I haven’t been around that long, but he’s the best horse I’ve ridden, and the biggest win of my career. We had a game plan to go forward, and it worked out for him today. Yes, maybe there was a bit of pressure, and after some criticism last time, but that was OK and the luck was with us today.” Chadwick, at just 21 years of age and a graduate of the HKJC Apprentice Jockeys’ School, became the first homegrown jockey to win one of the International Races.

Right: California Memory kicks up his heels as he heads back to the barn after the race. 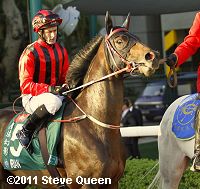 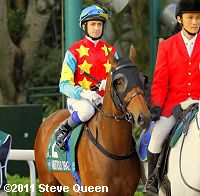 Left: Second place finisher Irian heads out for the post parade. Jockey Darren Beadman said, "If he draws a gate he makes it interesting, obviously the pace was against us, and we had to come to the outside, and he’s really finished it off. Truly, when I let him down today, he raced up to them that quickly I thought he would win by lengths but with 100m to go he just felt flat and couldn't keep going." Irian also finished second in last year's Cup.

Right: Fourth place finisher and beaten favorite Ambitious Dragon heads out for the post parade. Jockey Douglas Whyte said, "They just went too slow for him and I had to get going sooner than I would have liked."