The shortest of the International Races at Sha Tin is the HK$15 million (US$1.9 million) Longines Hong Kong Sprint (G1) at 1200 meters, the richest 6 furlong turf sprint in the world, and the final leg of the Global Sprint Challenge. Defending champion Lucky Nine was sent off as the 5-2 favorite in the field of 12, off his win in the Jockey Club Sprint (G2), the main local prep for this race. In to challenge him included 15-4 second choice Time After Time, runner-up of the Jockey Club Sprint, and 3-1 third choice Lord Kanaloa, in from Japan where he won the Sprinters Stakes (G1) at Nakayama.

Jockey Richard Fourie sent 9-1 Cerise Cherry to the lead down the backstretch through fractions of 23.80 and 45.55 while stalked by 59-1 Leading City and Lord Kanaloa. Cerise Cherry opened up a 1 1/4 length lead on 42-1 Captain Sweet at the 1/4 pole, but Lord Kanaloa was re-rallying after dropping back to fourth. Lord Kanaloa ran by Cerise Cherry at the 1/8 pole to win going away by 2 1/2 lengths in 1:08.50 over the good course. It was just a nose back to Captain Sweet third. 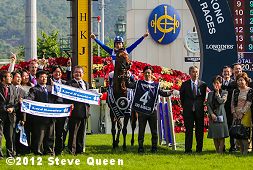 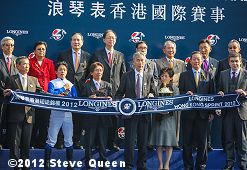 Left: Lord Kanaloa in the winner's circle. Winning jockey Yasunari Iwata said, "I was very happy to win the race. I believe he's the best sprinter in the world and was very pleased to see him prove that here in Hong Kong." 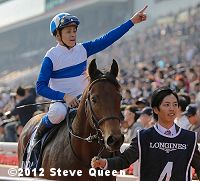 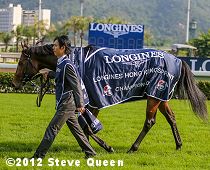 Left: Lord Kanaloa's parades for the fans. He is the first Japanese-trained horse to win the Hong Kong Sprint.

Right: Lord Kanaloa heads back to the barn after the race with his winner's blanket. 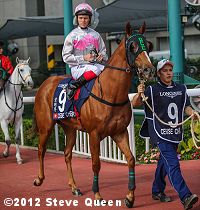 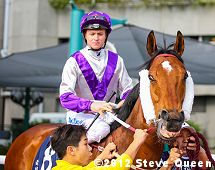 Left: Second place finisher Cerise Cherry heads out to the track before the race. Jockey Richard Fourie said, "I decided to go for the rail to avoid interference and the horse went all the way. Very brave."

Right: Third place finisher Captain Sweet heads out to the track. Jockey James McDonald said, "He was not the most fancied of these horses but gave me a good run. I am very pleased with his performance."