The Cathay Pacific Hong Kong International Races are the richest horse races run in Hong Kong, and is the last major race day for Thoroughbred flat racing anywhere in the world. Billed as the "Turf World Championships", four Group 1 races were contested on Sunday atfernoon over the right-handed 1 3/16 mile turf course at Sha Tin Racecourse. Conditions were excellent, with a "good" turf course, overcast skies, and temperatures in the lower 70's, with an estimated 54,000 on hand. Winfried Engelbrecht-Bresges, CEO of the Hong Kong Jockey Club said, "Today we have really staged the turf world championships, as our four international Group One races of the day won by horses coming from the UAE (Mastery), South Africa (J J The Jet Plane), Great Britain (Snow Fairy) and Hong Kong (Beauty Flash). This shows horses coming from different countries and regions can deliver good finishes in our international events. It's good for our Hong Kong racing brand and demonstrates our 'can-do' spirit. It's good for the Hong Kong brand, too."

In the main event, a field of 13 older horses contested the HK$20 million ($2.6 million U.S) Cathay Pacific Hong Kong Cup (G1) at 2000 meters (about 1 1/4 miles) on the turf. Epsom and Irish Oaks winner Snow Fairy, one of three fillies taking on males, was sent off as the 3-2 favorite off her win in the Queen Elizabeth II Commemorative Cup (G1) at Kyoto. In to challenge her included 4-1 second choice Collection, fifth in the Jockey Club Cup (G2) last out and winless since the Hong Kong Gold Cup in February, and 5-1 third choice and defending champion Vision d'Etat, second in the Champion Stakes (G1) at Newmarket after winning the Prix Gontaut-Biron (G3) at Deauville.

Jockey Olivier Doleuze sent 67-1 outsider Packing Winner to the front on the clubhouse turn and he set early fractions of 25.98, 51.17, 1:16.55, and 1:40.03 while being pressed by 47-1 Cirrus des Aigles and 29-1 Super Pistachio down the backstretch. Turning for home, Packing Winner continued to lead but Snow Fairy, unhurried early, and 11-2 Irian, who sat midpack saving ground the whole way, made their moves to the front. The pair passed the pacesetter at the 1/16 pole, as Snow Fairy outfinished Irian by a neck, completing the trip over the good turf course in 2:02.96. It was another 1 3/4 lengths back to Packing Winner third. 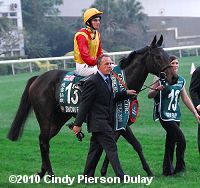 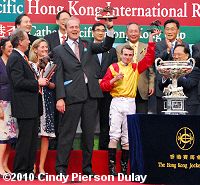 Right: Racing manager Patrick Cooper for owner Anemoine Ltd., trainer Ed Dunlop, and jockey Ryan Moore celebrate at the trophy presentation. Dunlop said, "All credit to my staff who have worked so hard on an amazing day for the yard. I thought it was too close between races to run her after Japan and she didn't gallop for seven weeks. To do it against the colts for the first time puts her down as an exceptional horse, there can be no doubt over that. She will definitely stay in training, no question, and you never know, she could be back here next year." 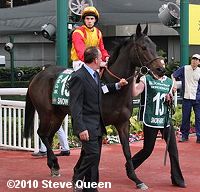 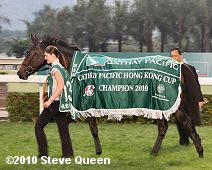 Left: Snow Fairy heads out to the track before the race. Her jockey Ryan Moore said, "On the top of the bend I thought I had no chance but she quickened up so well and is an absolute machine to do what she did. They went fast into the first turn and then steadied. She has such a brilliant turn of foot. You would struggle to find too many fillies that could have done what she did."

Right: Snow Fairy heads back to the barn after the race. 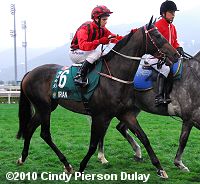 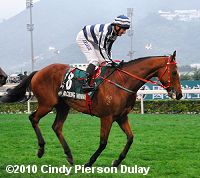 Left: Second place finisher Irian in the post parade. His jockey Brett Prebble said, “He's run a super race again. It's taken a really good one to beat him.”

Right: Third place finisher Packing Winner returns after the race. His jockey Olivier Doleuze said, “He's a very brave horse. Never gives up. He kept on going to the end.”