At Happy Valley Racecourse in Hong Kong on Wednesday night, Ryan Moore, who shared last year's title in a 3-way tie, won this year's edition of the Cathay Pacific International Jockeys' Championship, with his 2 wins and 24 points in the 4 race competition, taking home the HK$200,000 (US$25,750) first prize. Jockeys were awarded 12 points for a win, 6 points for second, and 4 for third, and competed in three races over the 7 furlong right-handed turf course with randomly assigned mounts under handicap weights. Local jockey Douglas Whyte was second with 18 points, followed by Australia's Nash Rawiller's 12 points, while celebrating his 36th birthday on his first visit to Happy Valley.

In the first leg, Moore aboard 5-2 shot Something Special, raced in midpack the whole way in the 1650 meter (about 1 mile) race, came out at the 1/4 pole to pass tiring horses to get the win by 3/4 lengths over Jolly Wongchoy and French jockey Olivier Peslier. Local rider Brett Prebble aboard Medic Fortune finished third. In the second leg, Rawiller, riding 10-1 Record High, went right to the lead saved ground on the rail the whole way in the 1650 meter event, easily holding off Christophe Lemaire aboard High Luck by 1 1/4 lengths, with Whatabob and jocket Hiroyuke Uchida third. In the third leg, Whyte aboard 23-1 My Goal stalked the pace and hugged the rail in the 1650 meter race, then came through on the inside late to win by a neck over Prebble aboard Nordic Star. It was another 1/2 length back to John Murtagh aboard pacesetter Good Luck Win in third. In the fourth and final leg, Moore finally clinched the title aboard 23-1 Fearless. Moore sat well off the pace early, came out wide into the stretch and closed with a rush to win the 1800 meter (about 1 1/8 mile) race by 3/4 length over Ho Wongchoy and Douglas Whyte, with Uchida's mount Amityship another 1/4 length back in third.

Winning jockey Ryan Moore, who also won the World Super Jockeys Series in Japan in November, said, "It is really nice to win this event, on my very own this time. Especially good as I didn't think I held much chance coming into it. I went out pretty confident with the first winner Something Special because Tony told me the horse was in good form and how to ride him. He had a good draw and picked up well for me in the straight."

Ryan Moore said, "To be honest, I didn't hold out too much hope of winning the last race beforehand on form, but Fearless went to post feeling really good in himself, then he travelled well and when he picked off one at the top of the straight, he really wanted to get past the rest of them. It's a really nice buzz to ride winners anytime, but to do it in these big, prestigious competitions, it adds more to it because you need a lot of things to fall your way and a good bit of luck to get a result." This is a nice warm up for the big (Ineternational) races at Sha Tin on Sunday, which is the last big meeting of the season for me. I have some excellent rides in all four races, on Paco Boy, Snow Fairy, Crystal Capella and Kingsgate Native, not necessarily in that order!"

The lone North American participant, Julien Leparoux, finished in a 4-way dead heat for last scoring no points, having drawn wide posts in most of his races, a disadvantage on the tight 7 furlong oval. His best finish was 5th in the third leg. 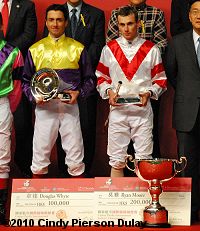 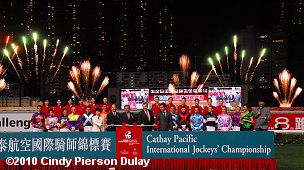 Left: First runner-up Douglas Whyte and winner Ryan Moore pose with their trophies and checks in the closing ceremony. 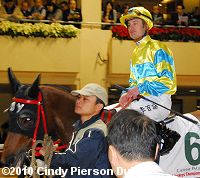 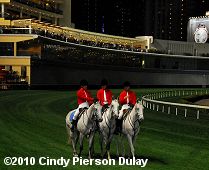 Left: U.S. jockey Julien Leparoux in the walking ring before the third race of the challenge. He was not lucky in the draw for mounts, getting all longshots, and did not score any points.

Right: All the outrider horses at Happy Valley are gray. Here is a group of them in front of part of the grandstand.

All the jockeys pose on stage after the competition. From left to right they are: Christophe Lemaire, Julien Leparoux, Nash Rawiller, John Murtagh, Douglas Whyte, Ryan Moore, Olivier Peslier, Howard Cheng, Anton Marcus, Joao Moreira. Missing are Hiroyuki Uchida and Brett Prebble as they were were involved in an objection over the running of the race. In the center between the two groups of jockeys are: Christopher Cheng Wai Chee (HKJC steward), Victor Hui Chun Fui (Vice-President of the Sports Federation & Olympic Committee of Hong Kong), Brian Stevenson (Chairman of the HKJC), Rupert Hogg (Director of Sales & Marketing of Cathay Pacific Airways), and a Cathay Pacific flight attendant.