Kicking off the Cathay Pacific Hong Kong International Races for 2010 was the HK$14 million ($1.8 million U.S.) Cathay Pacific Hong Kong Vase (G1), a 2400 meter (about 1 1/2 mile) trip for older horses over the right-handed turf course at Sha Tin. Melbourne Cup (G1) winner Americain was sent off as the 11-10 favorite in the field of 13, down from the originally drawn 14 after Joshua Tree was scratched the morning of the race. In to challenge him included 4-1 second choice Mastery, winner of the Floodlit Stakes at Kempton last out, and 5-1 third choice Crystal Capella, off her win in the Pride Stakes (G2) at Newmarket.

Jockey Ryan Moore sent Crystal Capella to the front first time past the stands through an opening quarter of 26.06, but 35-1 Mighty High moved up to take over the lead down the backstretch to set slow fractions of 50.15, 1:15.57, 1:40.84, and 2:04.82, while being stalked by 90-1 Jackalberry and 30-1 King Dancer. Turning for home, the pacesetters tired, setting the race up for the closers. Jockey Frankie Dettori sent Mastery, who raced in midpack saving ground around both turns early, to pass the tiring Mighty High to open a clear lead at the 3/16. He drew off the rest of the way to win by 2 1/2 lengths over 11-1 Redwood in 2:27.69 over the good turf. It was another 1/2 length back to favorite Americain third. 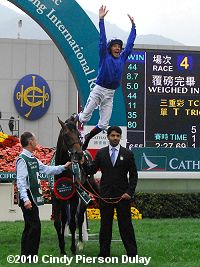 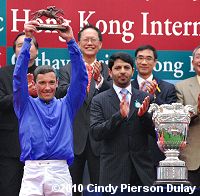 Left: Frankie Dettori makes his famous flying dismount from Mastery in the winner's circle with trainer Saeed bin Suroor looking on. Saeed bin Suroor said he would go next in the Dubai Sheema Classic on the Dubai World Cup undercard, adding "And as he will stay in training we may be able to come back and try and win this race again in 2011."

Right: Winning jockey Frankie Dettori said, "Saeed told me the horse has been flying the last couple of days and he was going so well as they came into the straight I knew when I pulled him out that nothing was going to outsprint me from there. For a four-year-old he's had very little racing and the fresh legs have definitely helped." 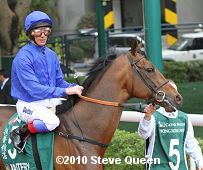 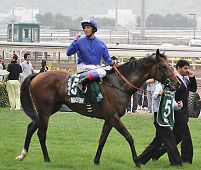 Left: Mastery heads out to the track before the race.

Right: Mastery returns after the race. Godolphin racing manager Simon Crisford said, "Mastery had a few problems earlier in the year and it is fantastic that he has come back to his best in the Hong Kong Vase. He was given a masterful ride by Frankie Dettori and won with a lot of authority. It a huge win for Godolphin, providing the 200th victory of the year and the 12th Group One success of 2010. I am delighted for the whole team at Godolphin." 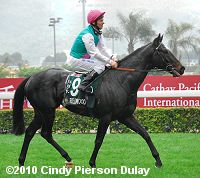 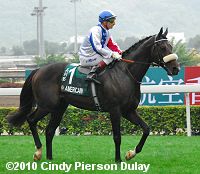 Left: Second place finisher Redwood returns after the race. His jockey Michael Hills said, "It was a really lovely run. Couldn't believe how well I was going the whole way. Don't worry, my bloke quickened at the end but the winner was just too good. He ran a super race."

Right: Third place finisher and beaten favorite Americain returns after the race. His trainer Alain de Royer-Dupre said, "The pace of the race was too slow for him especially at the last bend. He's a very good horse, but it's impossible to catch these faster runners under such conditions. I'm confident he will eventually succeed over 12 furlongs and with a faster pace, perhaps the Japan Cup could be a race for him next year."