The shortest of the International Races at Sha Tin is the HK$12 million ($1.6 million U.S.) Cathay Pacific Hong Kong Sprint (G1) at 1200 meters, the richest 6 furlong turf sprint in the world. Top local hope and defending champion Sacred Kingdom was sent off as the 7-5 favorite in the field of 14, exiting a disappointing 5th place finish in the Jockey Club Sprint (G2). In to challenge him included 7-2 second choice and Singapore representative Rocket Man, winner of the Jockey Club Sprint and the Garden City Trophy, and 9-2 third choice Lucky Nine, 6th in the Jockey Club Sprint after winning the National Day Cup.

Jockey Olivier Doleuze sent 60-1 outsider Dim Sum to a clear lead immediately, and he set early fractions of 23.56 and 45.98 while being stalked by 35-1 Ultra Fantasy 1 1/2 lengths behind, and Rocket Man another 1 1/2 lengths back, down the backstretch and around the turn. Dim Sum stubbornly held the lead to the 1/8 pole, but tired badly late. 17-1 J J The Jet Plane came on late down the center of the course, chased by Rocket Man to his inside in a duel to the line, but J J The Jet Plane dug in to hold off his rival by a head in 1:08.84 over the turf rated good. It was another 3/4 length back to favorite Sacred Kingdom third. 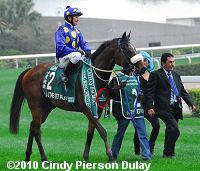 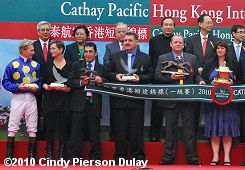 Left: J J The Jet Plane heads to the winner's circle. His trainer Michael Houdalakis said, "I had him as a two-year-old and wasn't ready to campaign him abroad so I left that to the 'The Master' (Mike de Kock), but I decided the time had come for me to give it a bash. He has super talent and is an absolute natural with a big, powerful stride which gets him home."

Right: All the connections and officials pose with the trophy and winner's banner after the trophy presentation for the Hong Kong Mile. From left: jockey Piere Strydom, co-owner Natalie Houdalakis, trainer and co-owner Michael Houdalakis, and co-owners Hennie Du Preez, Coenie Strydom, and Thea Boyens. 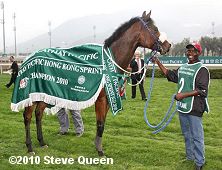 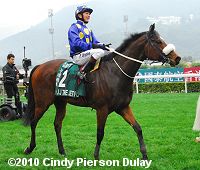 Left: J J The Jet Plane's groom poses with him in his winner's blanket.

Right: J J The Jet Plane returns after the race. His jockey Piere Strydom said, "We had a great run. Always travelling well. When we eased out on straightening I was happy to go after Rocket Man early as I didn't want him to get away. My bloke gave me everything and we got there on the line. It's brilliant to win and I really want to thank the owners for being loyal to me as there's plenty of good jockeys here they could have chosen." 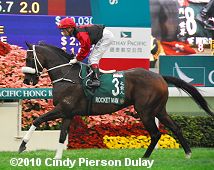 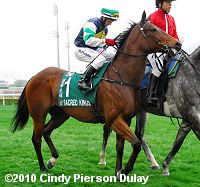 Left: Second place finisher Rocket Man runs off after the post parade. His jockey Felix Coetzee said, "What can I say. We just have to accept it. Thought we had it but he's run so well again."

Right: Third place finisher and beaten favorite Sacred Kingdom in the post parade. His jockey Brett Prebble said, "Fantastic effort again. It's hard to stay on top forever. He had his chance but just died on his run in last bit. He probably can't quite push himself trough the pain barrier like he once could but he ran super. There's plenty of good domestic Group 1's at least left in him."