Kicking off the Longines Hong Kong International Races for 2012 was the HK$15 million (US$1.9 million) Longines Hong Kong Vase (G1), a 2400 meter (about 1 1/2 mile) trip for older horses over the right-handed turf course at Sha Tin. Defending champion Dunaden was sent off as the 11-10 favorite in the field of 12, exiting a disappointing 14th in the Melbourne Cup (G1) after winning the Caulfield Cup (G1). In to challenge him included 5-1 second choice Meandre, 12th in the Prix de l'Arc de Triomphe after winning both the Grand Prix de Saint-Cloud (G1) and the Grosser Preis won Berlin (G1), and 11-2 third choice Bayrir, winner of the Secretariat Stakes (G1) at Arlington before disappointing 10th in the Arc. 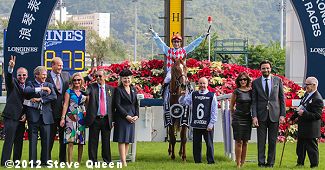 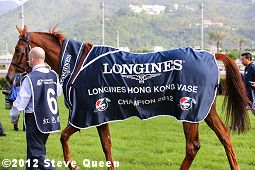 Left: Red Cadeaux in the winner's circle. Winning jockey Gerald Mosse said, "Even if he went one more lap no one would pass me. Jaguar Mail made me make my move because I feared at the 500m that someone was coming up so I decided right away to pick up. From there he really fought to the line. He showed fighting spirit all the way."

Right: Red Cadeaux heads back to the barn after the race. Winning owner Ronald Arculli, former chairman of the Hong Kong Jockey Club, said, "It's a very big deal and all credit must go to the Dunlop Racing team, Ed, Becky and his Travelling Head Lad Robin. And credit too to Gerald Mosse, he's a very experienced rider here in Hong Kong and it helped that he rode the horse in Japan. A year in racing's a long time but we might try Melbourne again next year." 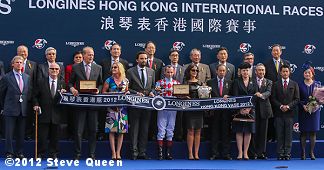 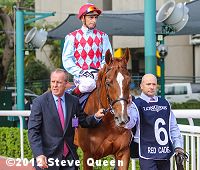 Left: The trophy presentation for the Hong Kong Vase.

Right: Red Cadeaux heads out to the track before the race. Winning trainer Ed Dunlop said, "At the 200m mark I thought we were going to get beaten by Jaguar Mail but Gerald (Mosse) gave him a great ride and he was in the right place. The horse battled very hard today. This is our third victory here and winning races like this is what it's all about for me. We've been lucky to have great owners and great horses to come here. To win three races, Ouija Board (Vase 2005), Snow Fairy (Cup 2010) and now Red Cadeaux – I'm pinching myself to think he's now won a Group 1 over 1 1/2 miles. He's come through the handicap system and he gets better and better – he's a really tough horse." 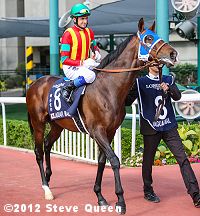 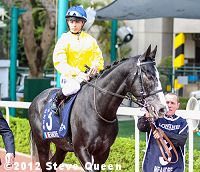 Left: Second place finisher Jaguar Mail heads out to the track before the race. Jockey Douglas Whyte said, "We had a good trip and the horse did well although wanted to hang in towards the winner in the end."

Right: Third place finisher Meandre heads out to the track before the race. Jockey Maxime Guyon said, "The pace was all right and my horse was quite relaxed throughout the race. We were following the two first home entering the last straight. No excuse, he did well today."