At Happy Valley Racecourse in Hong Kong on Wednesday night, Joao Moreira won this year's edition of the Longines International Jockeys' Championship, with his 2 wins and 30 points in the 4 race competition, taking home the HK$200,000 (US$25,750) first prize and tying the record of local rider Douglas Whyte with 3 career titles. Jockeys were awarded 12 points for a win, 6 points for second, and 4 for third, and competed in four races, each contested at 1650 meters (1 mile 44.5 yards) over the 7 furlong right-handed turf course with randomly assigned mounts under handicap weights, before a crowd of 18,649. New Zealand jockey James McDonald finished second with 18 points, followed by Frenchman Christophe Lemaire's 12 points. 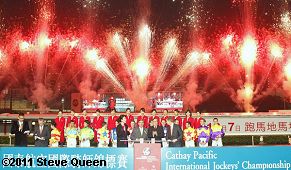 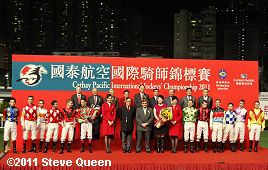