The shortest of the International Races at Sha Tin is the HK$15 million (US$1.9 million) Longines Hong Kong Sprint (G1) at 1200 meters, the richest 6 furlong turf sprint in the world, and the final leg of the Global Sprint Challenge. Defending champion Lord Kanaloa was sent off as the 4-5 favorite in the field of 14 older horses, off his win in the Sprinters Stakes (G1) at Nakayama. In to challenge him included 5-1 second choice Sterling City, second in the Jockey Club Sprint (G2), the local prep for this race, and 11-2 third choice Frederick Engels, 8th in the Jockey Club Sprint and winless in almost a year.

62-1 Rich Tapestry and 50-1 Go Baby Go battled for the lead down the backstretch through opening fractions of 23.89 and 46.36 over the good-to-firm course while stalked by 31-1 Cerise Cherry and 240-1 Jwala. At the top of the lane, Rich Tapestry held on to a short lead down on the rail but favorite Lord Kanaloa, 7th early, came through between horses to get the lead at the 3/16 pole, drawing off through the stretch to win going away by 5 lengths over late-running 76-1 Sole Power in 1:08.25. It was just 1/4 length back to Frederick Engels third. The race was marred by tragedy when Jwala broke down inside the 1/16 pole and was euthanized. 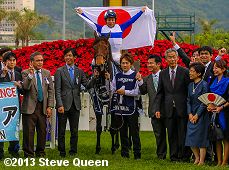 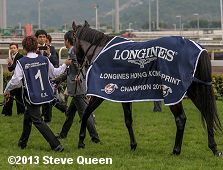 Left: Lord Kanaloa in the winner's circle. Winning jockey Yasunari Iwata said, "This was the best performance of his career, and I could feel him ready to unleash his run on the home turn. Maybe he knew it was his final race. Once the gates opened he was just brilliant today. It's a great day for us to show what a wonderful horse he is, and to win this for a second time in front of his many race fans in Hong Kong."

Right: Lord Kanaloa heads back to the barn after the race with his winner's blanket. 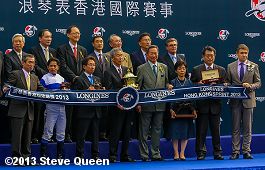 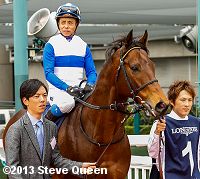 Left: Lord Kanaloa heads out to the track before the race.

Right: All the connections and officials pose with the trophy and winner's banner after the trophy presentation for the Hong Kong Mile. Trainer Takayuki Yasuda said, "It's wonderful to win for a second time here, especially as it is his last race. I look forward to training his offspring, and I hope one day I have one good enough to bring back here. He's a champion and I don't care about his rating of 120, that's not so important in Japan. Today I think he ran probably to 125." 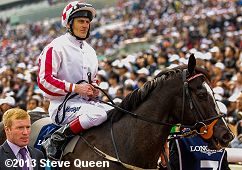 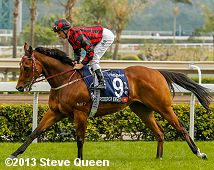 Left: Second place finisher Sole Power heads out to the track before the race. Jockey John Murtagh said, "That was a huge run. He's used to running on straight tracks at home and he's not the best turning horse in the world and he didn't come around the bend well here, but it was still a great run. The winner is something special."

Right: Third place finisher Frederick Engels warms up before the race. Jockey Zac Purton said, "We had a perfect run and we did have every chance but the winner was just in a different league. The horse did his best."