Kicking off the Longines Hong Kong International Races for 2013 was the HK$15 million (US$1.9 million) Longines Hong Kong Vase (G1), a 2400 meter (about 1 1/2 mile) trip for older horses over the right-handed turf course at Sha Tin. The Fugue was sent off as the 3-2 favorite in the field of 12 (after 2 scratches), off her close second in the Breeders' Cup Turf (G1) after winning the Irish Champion Stakes (G1). In to challenge her included 4-1 second choice and defending champion Red Cadeaux, second in the Melbourne Cup (G1) last out, and 9-2 third choice Mount Athos, third in the Melbourne Cup.

Jockey Andrasch Starke sent 31-1 Nymphea to the lead first time past the stands and she set easy fractions of 25.91, 50.13, 1:15.07, and 1:40.12 while pressed by Mount Athos and 38-1 Liberator. At the top of the stretch, Nymphea began to tire allowing Liberator to inherit the lead through 1 1/4 miles in 2:04.10, holding it to the 1/8 pole before tiring badly. 12-1 Dominant, who was last early, came through to take over the lead inside the final furlong, and was all out to hold off late-running favorite The Fugue and 6-1 Dunaden get the win in 2:27.29. The Fugue outfinished Dunaden by a head in the photo finish for second money. 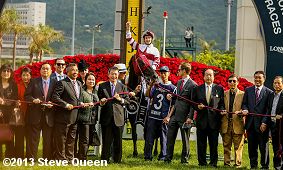 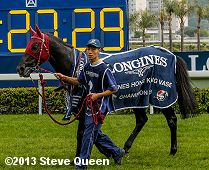 Left: Dominant in the winner's circle. Winning jockey Zac Purton said, "When they steadied up down by the 1200m and they all started to bunch up I could see a couple of the favoured runners just going to be held up in a little bit of trouble, so I was able to move into the race with nice galloping room around the outside. I thought they're getting boxed up so I might as well try and get a break on them and see how we go and luckily enough I had enough in the tank."

Right: Dominant heads back to the barn after the race. 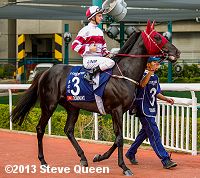 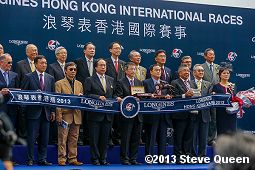 Left: Dominant heads out to the track before the race.

Right: The trophy presentation for the Hong Kong Vase. Winning trainer John Moore said, "It's a big surprise, I can tell you. When we drew gate 14, my jaw dropped out and I thought we had no chance at all. He was given a fantastic ride by Zac. He was allowed to find his feet and he got to the line even better than I thought he would because I thought he might be just lacking mileage in his legs to do what he did today. I was wrong, I erred. Zac Purton, the great rider – we are up here with a race we didn't expect to win. There isn't anything here for him so the obvious race to look at is the Sheema Classic in Dubai." 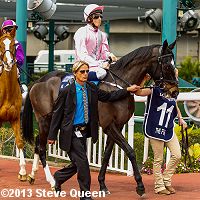 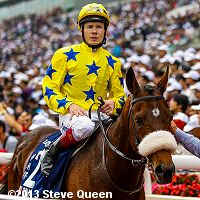 Left: Second place finisher and beaten favorite The Fugue heads out to the track before the race. Jockey William Buick said, "It was a tricky race. I was well placed and suddenly a horse just stopped and took me with him. The winner got first run on me and I had lost momentum."

Right: Third place finisher Dunaden heads to the unsaddling enclosure after the race. Trainer Mikel Delzangles said, "Once again he gave everything but we were too far back and it was too much for him to do it from there. I just wish we could have stayed on for second."