Kicking off the Longines Hong Kong International Races for 2014 was the HK$16.5 million (US$2.1 million) Longines Hong Kong Vase (G1), a 2400 meter (about 1 1/2 mile) trip for older horses over the right-handed turf course at Sha Tin. Flintshire was sent off as the 11-10 favorite in the field of 11 off three straight second place finishes, in the Prix Foy (G2), Prix de l'Arc de Triomphe (G1), and the Breeders' Cup Turf (G1). In to challenge him included 4-1 second choice Snow Sky, off a third place finish in the St. Leger (G1) at Doncaster, and 11-2 third choice Willie Cazals, seventh in the Jockey Club Cup last out. 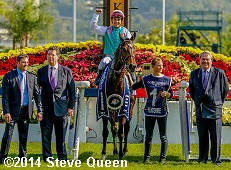 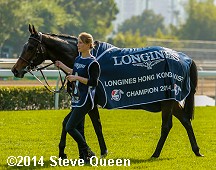 Left: Flintshire in the winner's circle. Winning jockey Maxime Guyon said, "You are always a bit under pressure when you're riding such a favourite, especially after two second places at the highest level. But you have to focus on your race and once the gates open, you try to do your job as well as you can. We ended up pretty far away in the backstretch but I followed Red Cadeaux, knowing that he'd need to start moving early. We eventually came about the frontline in the last turn and I was happy to let him go then. He accelerated without failing, even though he sort of idled once he hit the front."

Right: Flintshire heads back to the barn after the race. 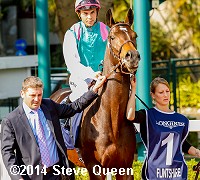 Left: Flintshire heads out to the track before the race.

Right: The trophy presentation for the Hong Kong Vase. Lord Grimthorpe, racing manager for owner Juddmonte Farm (Prince Khalid Abdullah) said, "It's really important to get a win on the board and it's thrilling. We've had some near misses with the likes of Polish Summer and Cityscape, and to nail it today with Flintshire is just fantastic. I was yelling from the stands 'would you go on' but he has got a good turn of foot, this horse and he was travelling pretty smoothly," he continued. "But I think he'd have liked a faster pace. It worked out really well. Maxime gave him a super ride. There were no problems in running and he came through very nicely in the end." 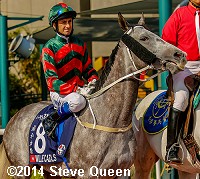 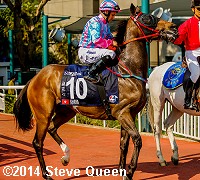 Left: Second place finisher Willie Cazals heads out to the track before the race. Jockey Douglas Whyte said, "Great run but the winner was too good. We were there to snap him up but Flintshire fought back and was just too strong."

Right: Third place finisher Khaya heads out to the track before the race. Jockey Mirco Demuro said, "Very happy. He's very one paced and he ran well. The instructions from John (Size) were to go to the front and I was able to make my own pace and he fought all the way."