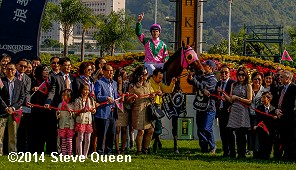 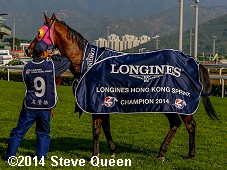 Left: Aerovelocity in the winner's circle. Winning Zac Purton said, "At the furlong marker he wanted to hang in and get up on the fence, which is a trait of his, but he wanted to do it more so today than he had done previously, so I was a bit worried that he was going to take the fence on, rather than go forward. I managed to keep him off it enough and keep him going forward. It was a tough effort. It wasn't the plan to go and lead but when you jump that well and the opportunity is there, you have to take it. I have led on him previously and he can be ridden like that, so I wasn't worried about it. It took him about a year to settle in here, and as you can see he can be a bit of a head case. Once he started to enjoy it, his racing began to improve."

Right: Aerovelocity heads back to the barn after the race with his winner's blanket. 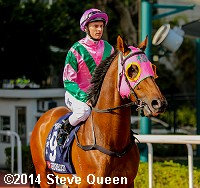 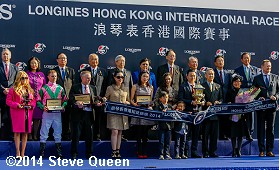 Left: Aerovelocity heads out to the track before the race.

Right: All the connections and officials pose with the trophy and winner's banner after the trophy presentation for the Hong Kong Mile. Trainer Paul O'Sullivan said, "He got a nice run, he got left alone in front, it was a good ride on a good horse. It has been a long time since the last big one, so hopefully we won't have to wait so long for the next one. You get one good horse and it can turn it all around." 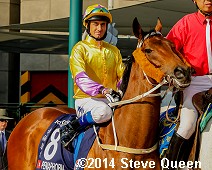 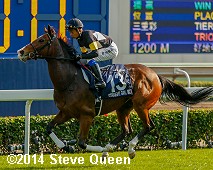 Left: Second place finisher Peniaphobia heads out to the track before the race. Jockey Douglas Whyte said, "He ran a terrific race and we have no excuse once again. He landed in the one-one, the right spot and rallied but the winner held the fence and kicked. It was still a great performance from my horse."