Kicking off the Longines Hong Kong International Races for 2015 was the HK$16.5 million (US$2.1 million) Longines Hong Kong Vase (G1), a 2400 meter (about 1 1/2 mile) trip for older horses over the right-handed turf course at Sha Tin. Sword Dancer (G1) Flintshire was sent off as the 3-2 favorite in the field of 13 off his runner-up finish in the Prix de l'Arc de Triomphe (G1). In to challenge him included 3-1 second choice Highland Reel, winner of the Secretariat Stakes (G1) but 3rd in the Cox Plate (G1), and 6-1 third choice Helene Happy Star, winless since the Champions and Chater Cup (G1) in May and 9th in the Jockey Club Cup (G2) last out.

Jockey Ryan Moore sent Highland Reel to the lead first time past the stands and he set early fractions of 25.84 and 51.45 while stalked by Helene Happy Star and 51-1 Cirrus des Aigles. Down the backstretch, 135-1 longest shot Harbour Master moved up to the front through fractions of 1:17.54, 1:41.73, and 2:05.37. At the top of the lane, Harbour Master tired badly as Flintshire, always close, gained the lead at the 3/16 pole and looked homefree. However, Highland Reel re-rallied in deep stretch to gain the lead just inside the 1/8 pole and drew off to win by 1 1/2 lengths in a time of 2:28.43. It was another 1 1/2 lengths back to 9-1 Dariyan third. 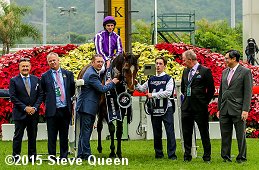 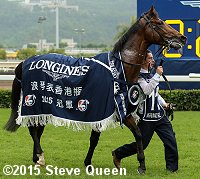 Left: Highland Reel in the winner's circle. Winning jockey Ryan Moore said, “He did it all very easily, he's turned into a good horse. He's improved immensely since the start of the year. He's had a hard schedule but he keeps getting better. When Flintshire came by me I thought I was in trouble but as soon as that horse folded a little bit he dug in and the way he's improved through the year, it's quite something. I was always happy to let him bowl along at his own pace and if someone else wanted to lead that was fine but he gets away very well, he's very professional. He was going quite nicely down the back then Harbour Master wanted to get on with it and I had to change the plan a little bit."

Right: Highland Reel heads back to the barn after the race. 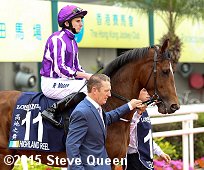 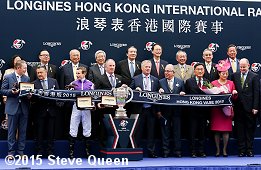 Left: Highland Reel heads for the post parade before the race.

Right: The trophy presentation for the Hong Kong Vase. Moore added, “I got into him and got him balanced in the straight and as soon as he got into a battle he really wanted it. Flintshire is a very high class colt and takes some beating in these races, so I think it was a very good performance from my horse. He's had plenty of experience around the world and he's only a three-year-old but he's a hardened three-year-old now." 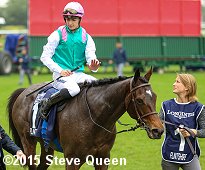 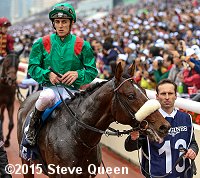 Left: Second place finisher and beaten favorite Flintshire returns after the track before the race. Teddy Grimthorpe, racing manager for owner Khalid Abdullah (Juddmonte Farms) said, "We're disappointed to be beaten but can't complain. He's run another very solid race. He came to win his race about a furlong out but in the end we have been beaten by a very decent three-year-old to whom we were giving weight. It's a possibility that he will go on to Dubai in March, but that will be up to Prince Khalid."

Right: Third place finisher Dariyan returns after the race. Jockey Christophe Soumillon said, “I had a horse on my outside leaning on me the whole way which did not help me. Otherwise, I would have been up there with Flintshire."