Jockey Joao Moreira sent Peniaphobia to the lead immediately and he set quick fractions of 23.91 and 45.94 taking a ground-saving trip while pressed by 28-1 Mikki Isle and stalked by Not Listenin'tome. Turning for home, Gold-Fun, who was 7th early, came out for room and put in a strong late rally but Peniaphobia easily held him off by 1/2 a length at the line, completing the trip in 1:08.74. It was another 1/2 length back to Not Listenin'tome third. 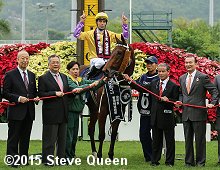 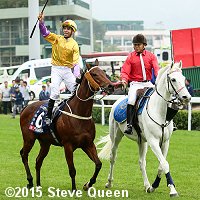 Left: Peniaphobia in the winner's circle. Winning jockey Joao Moreira said, "I used him a little bit to get across but he came back to me and gave me a beautiful ride. It's not that hard when you're talking about a good horse. He's so professional. He's been knocking on the door a few times and he made it today. I thank God that I was on board him, he was meant to win the race, the way he's done things today."

Right: Peniaphobia parades for the fans after the race as Joao Moreira celebrates. 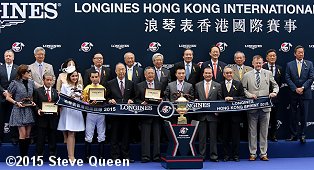 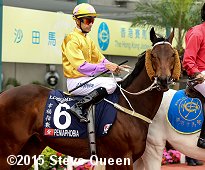 Left: All the connections and officials pose with the trophy and winner's banner after the trophy presentation for the Hong Kong Mile. Winning trainer Tony Cruz said, "He has a lot of early speed so you've got to use it. I thought he could cross them and Joao (Moreira) could relax him and wait for the straight. We'll definitely enter for Dubai and maybe think about England as well."

Right: Peniaphobia heads out for the post parade before the race. 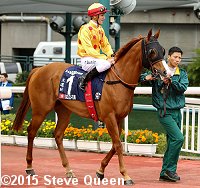 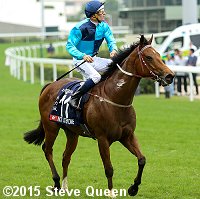 Left: Second place finisher Gold-Fun heads out for the post parade before the race. Jockey Christophe Soumillon said, "He broke fine I had a good trip but no one chased the leader they slowed down on the turn but I just didn't have enough to come and get them."

Right: Third place finisher Not Listenin'tome returns after the race. Jockey Hugh Bowman said, "I was very pleased with the horse. He gave me a two-length kick when I asked him to but it wasn't quite enough."